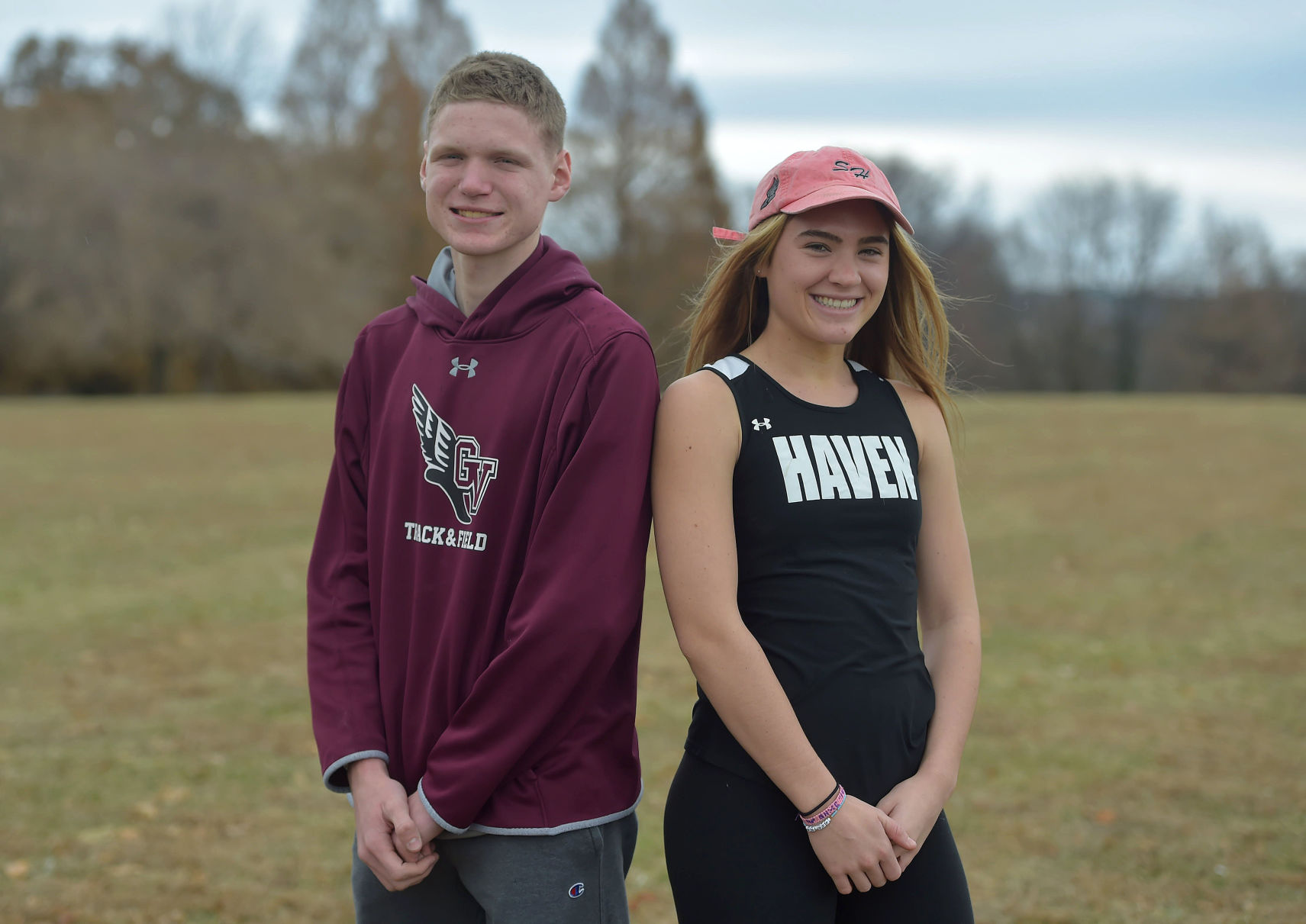 UPPER PROVIDENCE — Ava Crawford spent the summer of 2019 at Long Beach Island in New Jersey. For motivation to train for the upcoming cross country season, she had younger sister Rowe push her to work harder.

Sean Garrett always will remember the feeling he had after the 2017 District 1 cross country championship race. He failed to qualify for the state meet and made up his mind that it wasn’t going to happen again.

Crawford, a Strath Haven senior, and Garrett, a senior at Garnet Valley, started strong and kept getting better as the 2019 cross country campaign went on. By the final day of the season, they had earned the chance to take part in their respective PIAA Class 3A championship races. Crawford had a disappointing finish at states in Hershey while Garrett became the only runner from Delaware County to come back wearing a state meet medal after finishing 10th.

For their consistent performances during a long running season, Crawford and Garrett have been named runners of the year as they head up the 2019 Daily Times All-Delco Cross Country team, which was selected by the Times after consultation with area coaches.

Joining them on the first team are Rowe Crawford of Strath Haven, Liz Egan of Penncrest, Lindsey Smith of Notre Dame, Theresa Trainer and Katie Till of Cardinal O’Hara, Maura Timoney, Mike Donnelly and Josh Fingerhut of Haverford, Frank Brown of Radnor, Jalen Chin and Patrick Theveny of Penncrest and Owen Maier of Episcopal Academy.

Timoney, a junior, sophomore Rowe Crawford, and Trainer, a freshman, are the only underclassmen on the senior-dominated 2019 team.

Garrett is the first Runner of the Year from Garnet Valley since Julie Karaszkiewicz (2003) and the second Jaguars male runner to earn the honor, joining Kyle Barnum (1999).

Running has been a part of Crawford’s life for many years.

“I used to run with my dad (John) when I was younger,” she said. “I started running distances in eighth grade, when I ran a half-marathon with my mom (Katie). I didn’t run in middle school, but I started racing my freshman year in cross country. I had heard about what a good coach (Strath Haven’s Bill Coren) was, which made me want to run cross country.”

Garrett had a purpose behind his running when he was younger.

“I started running when I was in middle school,” he said. “I did that to get fit for soccer.”

“I ran with my sister and we really helped each other,” she said. “We always talk to each other when we are racing and sometimes we even sing songs. It was fun when were with each other in front (of the pack).”

Garrett didn’t wait long after the end of his junior school year to get a jump on his final cross country season at Garnet Valley.

“By the end of the summer I was hitting 50-55 miles a week,” he said. “All of my teammates were a big help and were super supportive throughout the whole season.”

Crawford and Garrett took different courses to get to Hershey by the end of the season. Crawford finished in second place at the Spiked Shoe Meet in Maryland, was fourth at the Briarwood Invitational at  Philadelphia’s Belmont Plateau, then won the Delaware County championship 15 seconds, with her sister taking second place.

“When our season started the focus was on the big meets – the Carlisle Invitational, the Paul Short Classic, the Central League Championships and the District 1 champs,” Garnet Valley coach Andy Etter said, referencing Garrett. “The Carlisle Invitational was the big turning point. He injured his hip at school a few days before the meet and didn’t run as well as he had wanted to. He wasn’t happy about it, but he had the motivation to keep running hard.”

Delcos was one meet in which Crawford’s individual success was tempered by the fact that Strath Haven failed by one point to defend its team title, with Haverford dethroning the Panthers. Crawford called it her “best race this year.

“I felt really good for the whole race, and it was fun,” she said. “I like running at Rose Tree (Park) because I know the course so well. I also know how much Coach Coren cares about Delcos.”

While most of the county teams were at Rose Tree Park for Delcos Oct. 5, Garrett and the Jaguars were at Lehigh University for the Paul Short Classic.

“Placing fourth and achieving a personal record time of 15:23 there was a highlight of the season for me,” Garrett said. “Not racing at Delcos was the right decision for me. It gave me better feel for the district course and gave me a chance to set a personal record.”

At the Central Leagues the next weekend, Crawford wasn’t feeling well and finished third, while Garrett claimed the boys’ individual title. And at the District 1 meet at Lehigh, Crawford was 17th, one place ahead of her sister as the pair qualified for the state meet. Garrett was third in the boys race, earning his place at states for the second year in a row.

“I was happy with my performance, but I knew I still had states coming up the next week,” he said.

At the state championship meet, Crawford placed a disappointing 77th, while her sister wasn’t far off being a medal winner with a 29th-place finish.

“I just went out too fast,” Ava said. “Now that the season is over, I’m looking forward to indoor track and hoping our 4 x 800 relay can make states.”

“She followed in the footsteps of the other Strath Haven champions,” he said. “She’s going to be running for Johns Hopkins, which just won the Division III national championship. And we’ll always remember how she coined our team chant last year: ‘Strath Haven Runs Delco.’”

Garrett went to Hershey gunning for a top 10 spot and achieved that goal.

“It was a relief crossing the finish line there because I knew all that hard work last summer had paid off,” he said. “I was 15th at two miles, but I was patient and moved up slowly to 10th place. It was exhilarating.”

Garrett went to New York recently for the Foot Locker Northeast Regionals and placed 34th. After that, his career path will follow a different direction.

“I plan to enlist in the Navy after graduation,” he said. “I’m not sure what I want to do in the Navy, but I’m looking forward to serving my country. And I plan to keep training for open races.”

Etter and those who work with the Garnet Valley runners realize how special Garrett’s accomplishments were this season.

“When talking with other coaches and staff members about Sean, I continue to say that he is one of the hardest working kids I know,” Etter said.