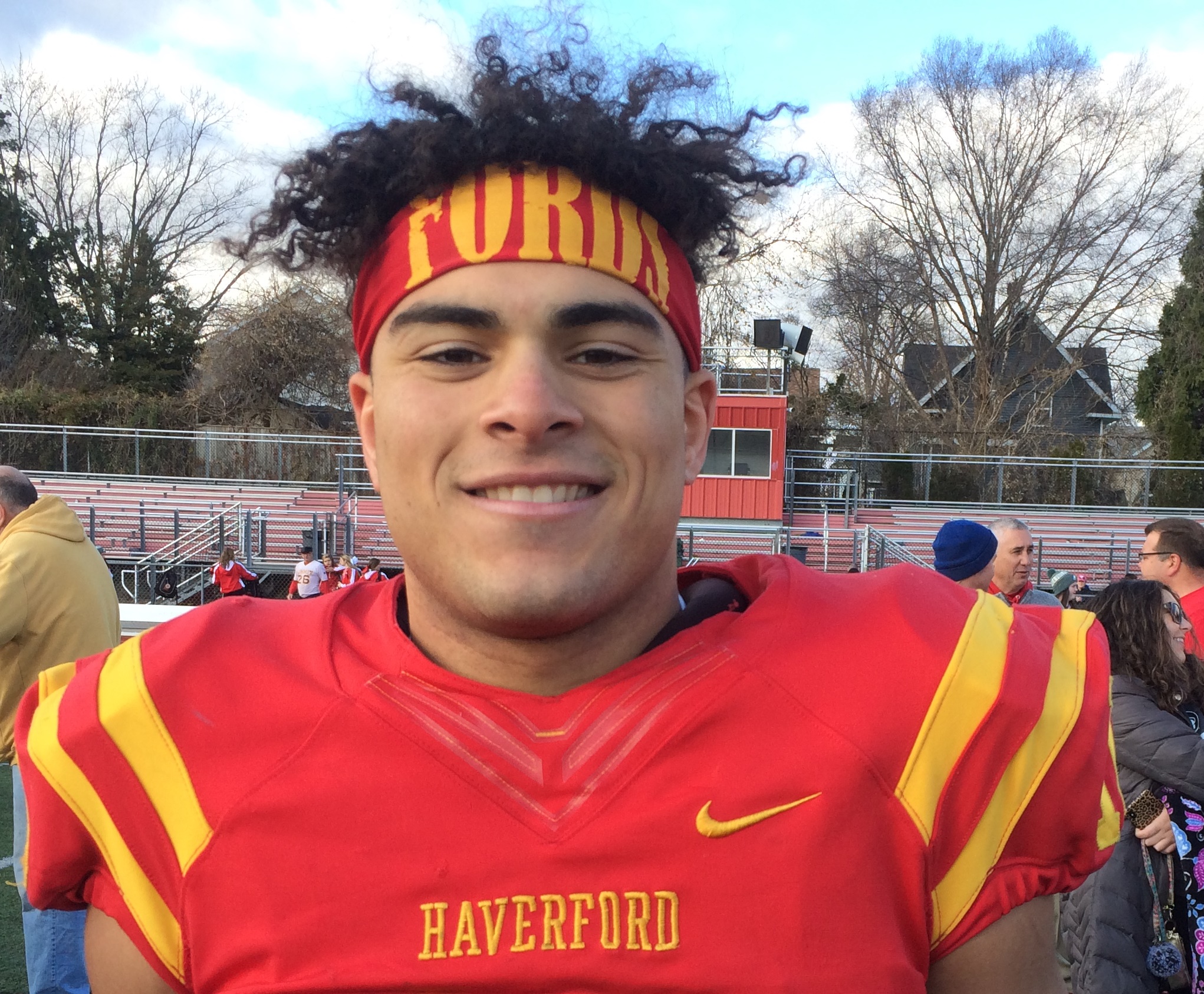 Blair finished his outstanding senior campaign by rushing for 258 yards and three touchdowns in 26 carries, and throwing two TD passes, during the Fords’ 42-18 win against Upper Darby Thanksgiving Day. He became the eighth player in Delaware County history to rush for 2,000 yards in a season, finishing with 2,154. Next fall, he will play football at the University of Buffalo. As a junior, Blair was a first team All-Central League selection at both wide receiver and defensive back, catching 27 passes for 526 yards and six TDs, rushing for 600 yards and intercepting six passes. His father, Chet Blair, is a member of the West Chester University Hall of Fame (for men’s basketball) and was the head coach of the Shipley girls’ basketball team from 2000-2003.

Q: After starring at multiple positions for the Haverford football team, you took over the quarterback reins this fall. What aspect of your quarterback play did you work on the most during the past off-season?

A: Playing quarterback has helped me really understand every aspect of the game of football. What I think I needed to work on the most was reading defenses and understanding coverages and pressures.

Q: Who is your favorite football player and why?

A: Jamal Adams. He plays with passion and is a well respected leader.

Q: You’ve had so many memorable games this season, including Haverford’s first two wins in the District 1 playoffs. What was your favorite game of the season? Can you share with us your most vivid memory of that contest?

A: My favorite game of the season was our second playoff game against Downingtown East. I personally played very well that game, but what stood out the most to me that game was when I got injured and couldn’t play the second half, everyone stepped up and played lights out to help us secure a win. It was incredible seeing my teammates step up to a challenge like that.

Q: Who have been your biggest football mentors, and what was the most important thing each of them taught you?

A: My biggest football mentors have been the coaching staff throughout my high school career. Going into high school, I liked football but it wasn’t my favorite sport. My coaches showed me nothing but love from the start of my freshman year and they helped me develop a strong passion for the game. They’ve taught me so much that I will bring with me on the field but they’ve always taught me a lot about life off of the field.

Q: You wear uniform jersey No. 10 for Haverford – is there a reason you picked this number – does it have any significance to you?

A: My birthday is 10/10/01 so I figured 10 would be a good choice. It didn’t have much meaning to me when I first chose it freshman year, but now every time I see that number it will remind me of my time at Haverford and how great it was.

Q: What extracurricular activities have you participated in at Haverford other than football?

A: I am very interested in the anatomy of the body and will probably go on the exercise science/nutrition route for my major.

To view a gallery of the Main Line Boys Athletes of the Week from 2013 to present, click here.