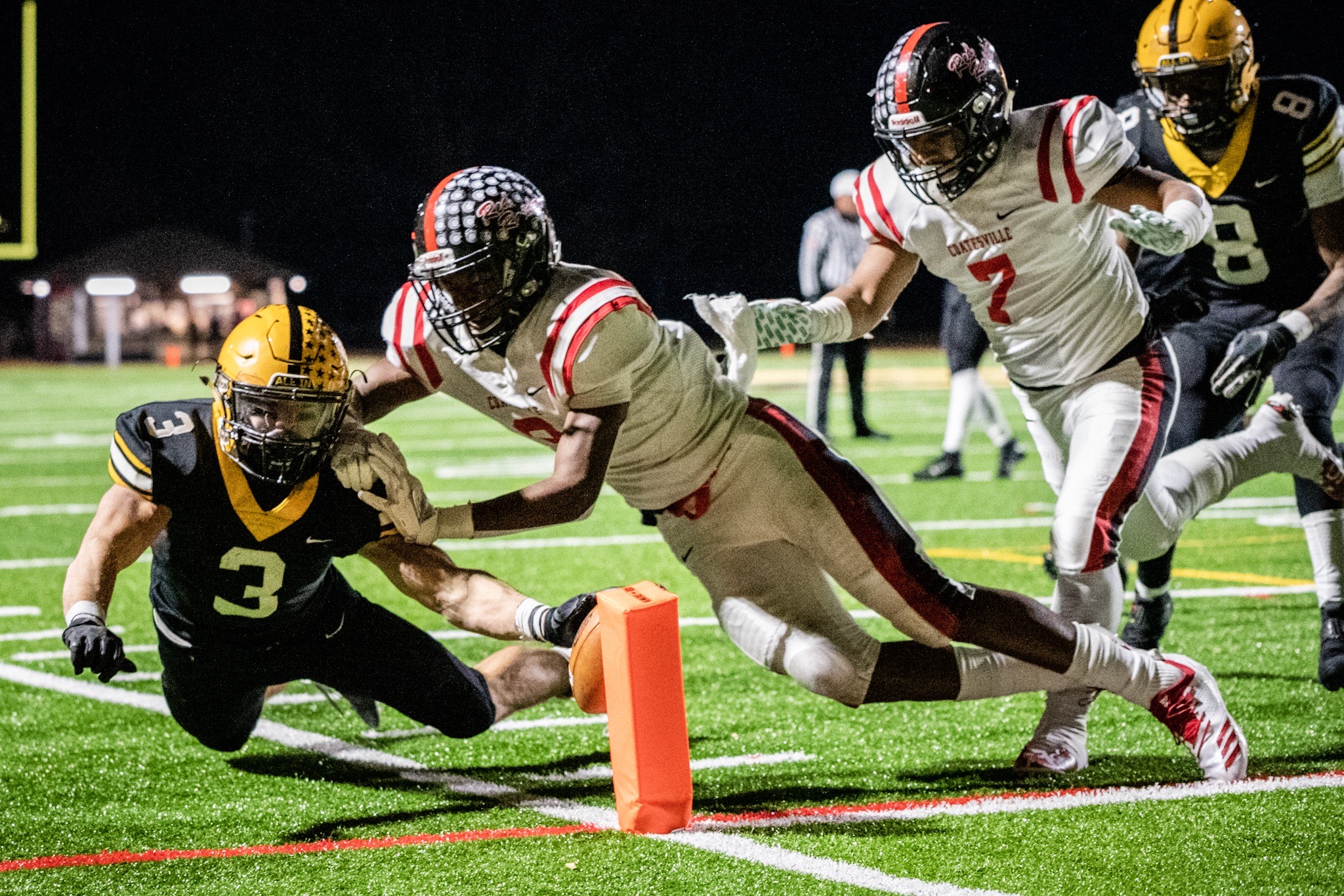 Central Bucks Wests Jack Fallon (3) is called out of bounds at the one yard line on a close play against Coatesville during their District 1-6A quarterfinal on Friday, Nov. 8, 2019. (James Beaver/For MediaNews Group)

The play should have been over, the end result a completion for a few yards and Central Bucks West staring at a fourth down trailing North Penn by six in the fourth quarter.

But Jack Fallon would just not go down.

After catching a pass from Jack Neri, Fallon somehow worked out of the grasp of two Knights defenders then avoided another tackle attempt as he proceeded to dash 43 yards to the North Penn 15.

Two plays later, Fallon scored his second touchdown of the night from nine yards out with 2:52 left — Bailey Moyer’s extra point making it 27-26 Bucks, a scoreline that held as the Central Bucks West moved to 8-0 with its first win over the Knights since 2000.

“All year I’ve been fighting, fighting and every time I get the ball I refuse to go down,” said Fallon after the game. “And that’s what I did. And I broke it.”

Central Bucks Wests Jack Fallon (3) breaks away for a long run against Coatesville in their District 1-6A quarterfinal on Friday, Nov. 8, 2019. (James Beaver/For MediaNews Group

Whether it was that October night at War Memorial Field on any other game during the season, Fallon was tough to slow down. The 2019 Reporter/Times Herald/Montgomery News Football Player of the Year powered a potent CB West offense that helped the Bucks claim the SOL Continental Conference title — the program’s first conference crown since 2004 — and reach the District 1-6A quarterfinals.

“He’s just, in my opinion, he’s the MVP of the league and he is an absolute just grinder of a kid,” said Bucks coach Rob Rowan after the North Penn win. “And that’s who he is, fighting for the extra yards and he’s dynamic.”

Fallon eclipsed 100 yards rushing 11 times in 12 games — including going over 200 yards in the Week 4 win over Central Bucks South — scored at least one touchdown in each of the Bucks’ first 11 games and earned all-conference honors in all three phases. He was a first-team selection at running back, a second-team pick at defensive and also made honorable mention at punter.

CB West switched to a Wing-T offense in Rowan’s second season and Fallon flourished in the system, finished with 1,749 yards rushing — an average of 145.8 yards per game — and scored 24 rushing touchdowns.  He also added another 213 yards on 14 catches, his 1,962 yards of total offense helping the Bucks’ offense average 34.3 points per game — a big bump up from the 18.7 per game it posted in 2018.

A week later, CB West’s run came to an end in the quarterfinals against Coatesville, but Fallon collected his third-highest rushing total of 2019 in the contest, running 23 times for 179 yards.

Fallon opened 2019 with three straight games rushing for more than 100 yards. He went for 128 yards and a TD in the season-opening win over Hatboro-Horsham, 104 and a score as the Bucks topped Council Rock South then ran from the game’s first three touchdowns and finished with 136 yards in the Week 3 win over Quakertown.

West began its SOL Continental schedule in Week 4 by snapping a five-game losing streak to Central Bucks South as Fallon produced his biggest rushing total of the season — going for 262 yards on 26 carries against the Titans and scoring four touchdowns — his last, from 60 yards out, putting the finishing touches on the 42-28 win.

After running for 140 yards and two TDs in a 28-0 win over William Tennent, Fallon aided West in snapping a five-game skid against Pennridge in Week 6. He opened scoring with 78-yard TD run in the first quarter, added a 6-yard TD run in the second quarter and finished with 168 yards on 18 carries in the 35-0 win.

Souderton’s Aonghas Evanick (52) grabs hold of whatever he can of CB West’s Jack Fallon (3) during their game on Friday, Oct. 18, 2019 at Souderton High School. (James Beaver/For MediaNews Group)

The Bucks claimed the CB Cup the next week as they rolled past Central Bucks East 45-10, Fallon rushing 16 times for 129 yards and scoring all three of his touchdowns in the first half.

West snapped another losing streak to a SOL Continental rival the following week in edging North Penn 27-26  stopping the skid against the Knights at 12 gmaes. Fallon scored the game’s first and last touchdowns. His 14-yard touchdown run made it 7-0 in the first quarter with his tackle-escaping 43-yard reception setting up his go-ahead 9-yard score late in the fourth. Fallon finished with 116 yards and 24 carries and seal the victory with an interception as the Bucks improved to 8-0 and clinched at least a share of the Continental title.

CB West’s unbeaten run ended in a Week 9 double-overtime loss to Souderton but Fallon helped the Bucks bounce back against SOL National champ Abington in the regular season finale. With a Souderton loss to CB South that night give West the outright conference crown, Fallon had his second-best rushing total of the year against the Galloping Ghosts, compiling 178 yards and four touchdowns on 23 carries as the Bucks earned the No. 2 seed in the District 1-6A playoffs with a 45-28 nonconference win.