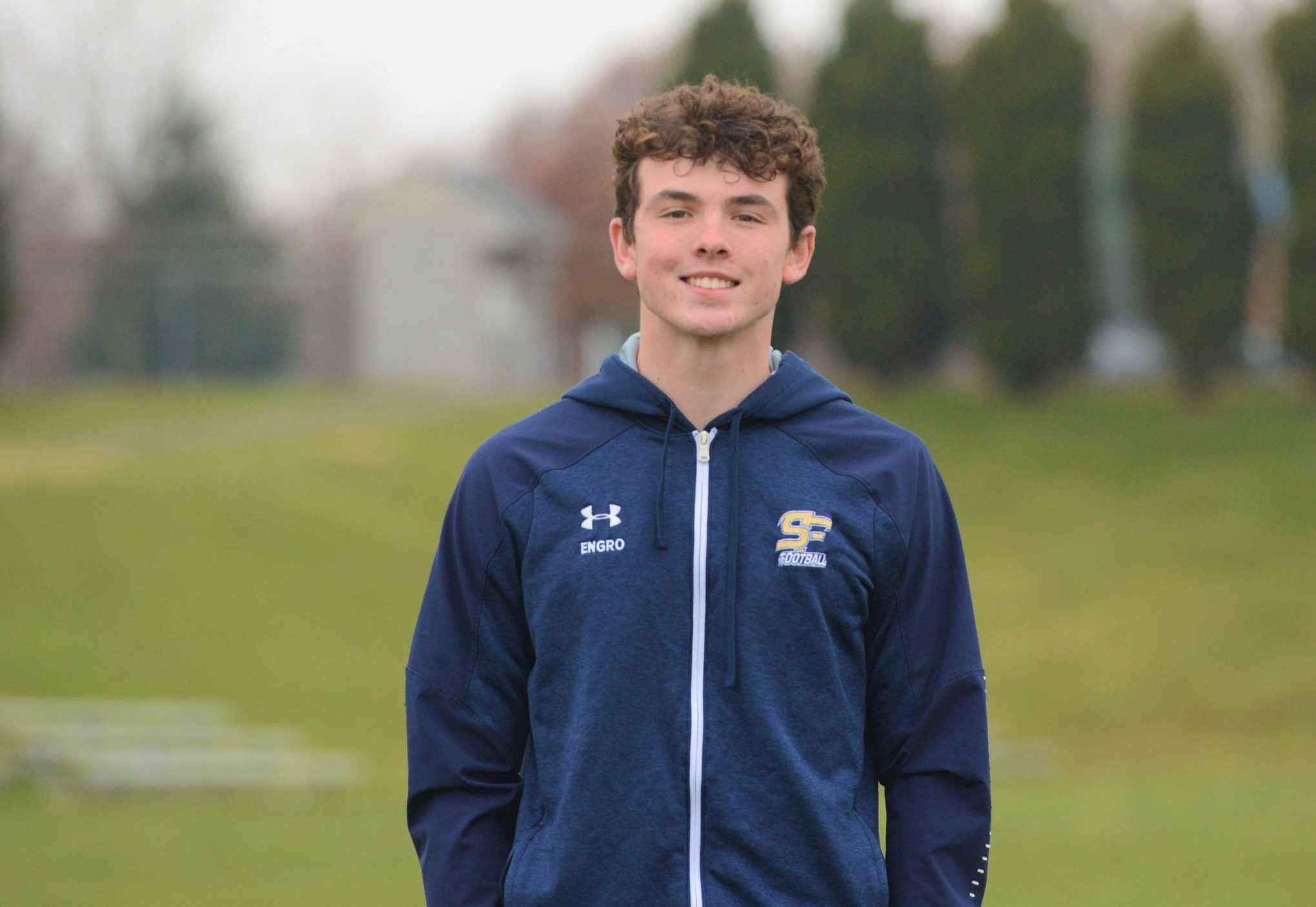 When Ryan Engro was about eight years old, he was happily playing running back in a youth league game when his coach and dad Mike came to him with a problem.

“Our starting quarterback was having problems with the cadence, calling the signals,” Mike Engro recalled. “So I told Ryan he’d have to do it.”

Engro quickly mastered the cadence, but that was only the first characteristic that started him down a path that led to the starting quarterback position for his last two years at Spring-Ford High School.

The Rams’ signal caller set numerous school records and received a multitude of honors – the latest of which is 2019 Mercury Area Player of the Year.

This past season, Engro starred as both a high-volume passer and the conductor of a run-first attack, ultimately accumulating over 2,800 total yards and 34 touchdowns en route to Spring-Ford’s first PAC championship since 2015 – the year before he entered high school.

“The highlight of this season, and really, high school in general, has been the ability to play with my friends,” said Engro. “Throughout our childhoods, the one constant has been sports – playing football, watching basketball, always together. That gave us the time we needed to build trust that we carried out onto the field.”

At schools as big as Spring-Ford, teams are always going to be ‘senior-laden’ and 2019 was no different as Engro was joined by a multitude of all-league performers who will graduate alongside him in June.

“We’re always going to be a senior-heavy team,” said Spring-Ford head coach Chad Brubaker. “But for this year, we wanted to get back to where we’d been in the past. Last year, we had [the PAC Championship] in our hands and let it go. We really cleared that slate, and it’s thanks to our excellent senior leadership.”

Brubaker’s decade atop the Spring-Ford program has given him the opportunity to work with several quarterbacks who’ve received All-Area or All-League recognition. What makes Ryan Engro different?

“Ryan is a true dual-threat as a quarterback,” said Brubaker. “And honestly, we haven’t had an opportunity to truly explore all his capabilities. As good as his junior and senior seasons were, I still feel like we left some things on the table.”

Why? Because after spending his sophomore year as a wide receiver, as a junior Engro moved into the starting quarterback’s role at the start of the 2018 campaign, only to sustain a knee injury on the second possession of the season opener.

The injury was such that he was able to continue playing, and he played well in leading Spring-Ford to an 8-1 start and a showdown with Perkiomen Valley for the division title.

After a solid first half that sent the Rams to a 20-3 lead, the offense struggled down the stretch as PV rallied for a 27-20 victory, their third straight over the Rams. Two weeks later, Engro’s junior season ended.

“That PV game (from 2018) lit a fire under us,” Engro said. “Coming back as seniors, none of us wanted to be remembered as the team who couldn’t get it done over our careers. It wasn’t as much about beating Perkiomen Valley as it was about proving something to ourselves.”

But first, Ryan Engro would undergo surgery on his meniscus, a procedure that took him out of spring practice and didn’t see him cleared completely until the week before fall practice for his senior year. His time away, however, actually gave Engro added confidence in his squad.

“I’m just watching from the sidelines, but all I could see was potential – on the lines, at the skill positions,” Engro said. “All over the field, I could tell we had a strong team.”

Both coach and player admitted that the early games of the 2019 season saw some hesitation to fully immerse the quarterback in the offense.

“That’s what I mean about leaving things on the table,” said Brubaker. “We were slow to incorporate Ryan into our running game, because of our depth concerns.”

“I was timid,” Engro admitted. “I’m sure it shows on tape, but it took some getting used to.”

The Rams struggled to a 1-2 start with losses to Central Bucks South and Wilson West Lawn, but it wasn’t for lack of performance by Engro, who topped 300 yards in two of the first three games of the season and eclipsed 400 yards (a school record 409) in the Wilson West Lawn loss. When the PAC season started, little did anyone know that Engro had already amassed the majority of his passing stats for the season.

That’s because the emergence of running back Armante Haynes combined with Engro’s improving confidence slowly changed the Rams from a high-volume passing attack into a run-first operation. Engro saw his pass attempts per game slowly decrease – from an eye-popping 49 throws against Wilson West Lawn down to only 26 two weeks later in a win over Norristown and only 16 tosses in a win over Boyertown.

But at the same time, the Rams’ running game was finding its footing – from only 51 yards rushing against Exeter to 300-plus yard outings in the Norristown and Boyertown wins. It all set the stage for the three-game run that would ultimately define the careers of not only Engro, but the 2019-2020 senior class at Spring-Ford.

It started with a Homecoming game on a Saturday afternoon with Owen J. Roberts, a fellow 6A contender this year. The loser was to be eliminated from PAC contention, and the Rams found themselves in an early 13-0 hole. But that running attack got going, while Engro enjoyed the most accurate day of his career (17-for-21 passing, two TD passes to All-Area WR Dante Bonanni) in a 35-21 win to set the stage for another showdown at Perkiomen Valley the following week.

“We were able to develop that run game in our early league schedule,” said Engro. “Right when we got to that Homecoming game with OJR, that was when I felt completely comfortable – throwing, running with the ball, and I think our offense did take a step forward.”

At Perkiomen Valley, the question was whether Spring-Ford could get enough from their running game to complement Engro’s prolific passing in allowing the Rams to get the monkey off their backs against the Vikings.

Instead, what followed was the lowest volume passing night of Engro’s career (only 11 attempts) as the running game took full center stage. Haynes and Engro each went over 100 yards rushing on the evening, with Engro dashing 25 yards late in the fourth quarter for what would be the deciding points in a Liberty Division-clinching 40-35 victory for the Rams.

Only now, however, do we get the real story about that final play, which appeared at the time to be a zone read with Engro and Armante Haynes.

“It was a fourth-down play, and it was a designated QB keeper (QB counter trey),” said Engro. “I was keeping all the way, but at that point, Armante’s averaging about 10 yards per carry, so of course they were keying on him.

In eight weeks’ time, Engro had progressed from a self-described ‘timid’ runner due to his injury to the guy Brubaker wanted carrying the ball with the biggest game of the year on the line.

The biggest game, that was, until the very next week, when the Rams returned to McNelly Stadium to host Pope John Paul II for the PAC championship game.

“With PJP coming in… I think we enjoyed that PV win for about 30 minutes on the ride home,” said Engro. “Then it was back to work.”

That work paid off. After a somewhat uneven first half, Spring-Ford shut out PJP after halftime in claiming a 38-21 decision and the PAC title. The balanced offense was the difference, as Spring-Ford built the lead with the running game and secured the win with the passing game in a victory that brought the PAC championship back to Royersford after a three-year absence.

“The PV game itself, that was electric,” recalled Engro, “but the postgame after PJP, when we had that plaque in our hands, that was most memorable. We were kind of celebrating both victories that night.”

The dream season was cut short a week later, as 12th-seeded Haverford started their district run by upending the No. 5 Rams in the first round of the playoffs. Ryan Engro didn’t go down without a fight, however, throwing a touchdown to Josh Hellauer on what would ultimately be his final high school pass.

“It was our last chance to play together,” remembered Engro. “Hard to swallow, but after a while you just tip your cap to [Haverford.]”

Engro’s last hurrah will come this spring, when he rejoins the track & field team at Spring-Ford after a year away due to his knee injury. As a sophomore, he put his dual-threat capabilities from the football field to use on the track, throwing the javelin and running the 100-meter dash. But the majority of Engro’s high school memories have already been built, not only on the football field but in the relationships that carry over off the field.

“It’s always amazing to see the community backing you, especially on a night like [the PV game],” he said. “It will always be special to look back and remember my family, my friends, and even some people I don’t know out there screaming my name, cheering for me.”

Engro’s own cheering section was especially robust that night at Perkiomen Valley. Aside from the constant presences of his father Mike, mother Eleanor, stepmother Lisa, two younger sisters, and 83-year-old Pop Pop (“he never misses a game”), Ryan’s uncle Bill flew in from Chicago for the game, as did his 75-year-old grandmother from Florida, only weeks after knee replacement surgery.

The Rams and their quarterback give back to that same community, as Engro said he’s looking forward to spending some of the holiday season volunteering with his teammates via RACK (Random Acts of Christmas Kindness), where team members go to various homes in the community to help with physical tasks such as moving furniture.

In the week between the Perkiomen Valley and Pope John Paul II games, Engro and the other seniors spent time at Spring City Elementary School, visiting and reading to kindergarten students.

“I can’t think of one person – players, parents, coaches – who doesn’t step up and help out with this program,” said Engro.

Engro, an honor roll student, plans to major in a business discipline next year at college. The big question – which college? – will be answered in the coming months, as he continues to talk to various coaches from different programs.

He may not have prototypical quarterback size, but he looks forward to continuing to prove that it won’t stop him from succeeding on the field.

“But I’m willing to switch to a different position if that’s what a school wants,” said Engro. “Ultimately, I just like playing football.”