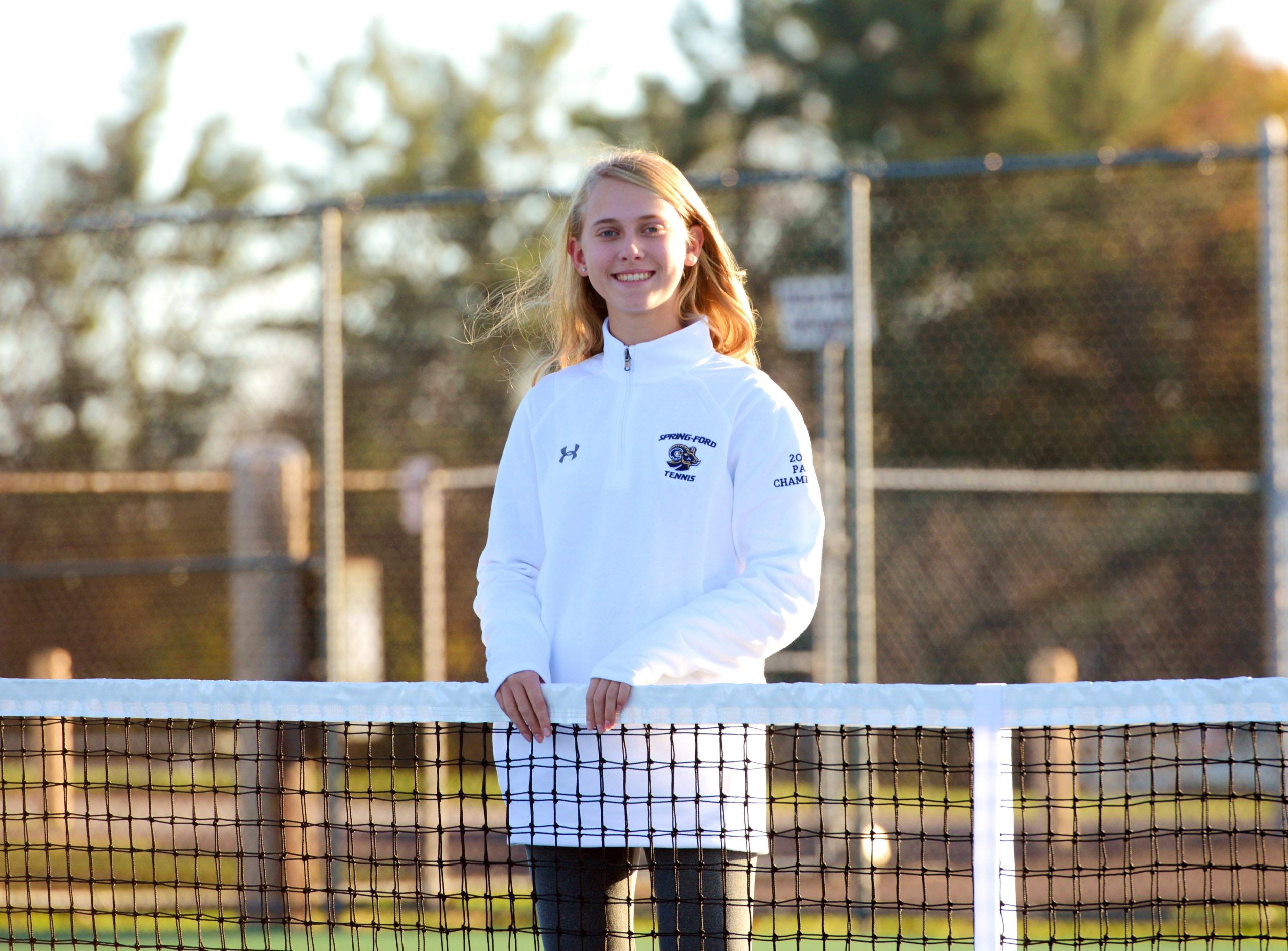 There was an abundance of talent at the top of Spring-Ford’s lineup this fall.

Three players — Riley Burke, Cady Krause, Isabel Mejia — were part of a spirited competition to see who would be the team’s first singles player this past fall. They dueled in the preseason for the right to be atop the Rams’ ladder.

It was Krause who emerged from the competition with the upper hand over her upper-classmen teammates.

The precocious freshman then managed to stay a step ahead of her Pioneer Athletic Conference opponents and teammates to claim both the league’s singles championship and Mercury All-Area Player of the Year honors.

Krause capped a near-perfect roll through the PAC’s regular season by winning 10 of 11 league matches. She then keyed Spring-Ford’s domination of the PAC Singles Tournament — it occupied three of four semifinal spots, that despite Krause being the lone Ram among the top four seeds — with a spirited three-set final against Mejia.

“It was unexpected,” Krause said of her successful freshman season. “It was pretty close. Both (Isabel and Riley) are very good.”

Despite being a rookie, Spring-Ford head coach Todd Reagan was impressed by Krause’s on-court demeanor.

“Cady did a good job staying nice and even-keeled,” he said. “She doesn’t get too high or too low. She’s focused, intent, determined.

“It’s always a testament to ability when a player performs like that as a freshman. She put in hard work over the past couple years.” The quarterfinals saw her extended to three sets by Upper Merion’s Rhea Desai. But Krause finished strong, her 6-1 victory in the third set complementing a 6-0 victory in the first.

“The third match, when I played her during the season, it was close,” Krause said. “In PACs, I controlled points more.”

In the semifinals against Pope John Paul II second seed Veronica Marinari, Krause was solid in a 6-2, 6-4 straight-set duel. That put her against Mejia, the Ram fifth seed coming off a 1-6, 6-4, 6-1 contest with eighth-seeded Burke.

“The finals was harder,” Krause recalled. “We were both tired, and the match dragged on to three sets.

“I tried to stay focused, not let up as playing. I tried to go with the first serve working … move her around a lot.” With that, Krause qualified for her first District 1-AAA singles tourney as the PAC’s top seed. Her post-season ended abruptly, though, in a 6-1, 6-0 loss to Conestoga’s Ananya Krishnan.

“It was very challenging,” Krause said of her district experience. “The competition level was a little harder than I was used to.”

But it did not obscure Krause’s progression in a sport which saw her start out by participating in clinics at Frog Hollow Racquet Club.

“I like the competitive aspect,” she said. “At Frog Hollow, I was able to get my backhand shots deeper.”

The refinement of her game continued at Spring-Ford, complemented by the input from her parents — they both play the sport — to “go for shots.”

“I tried to move up on the ball, to be more aggressive,” Krause added. “I think I improved on that.”