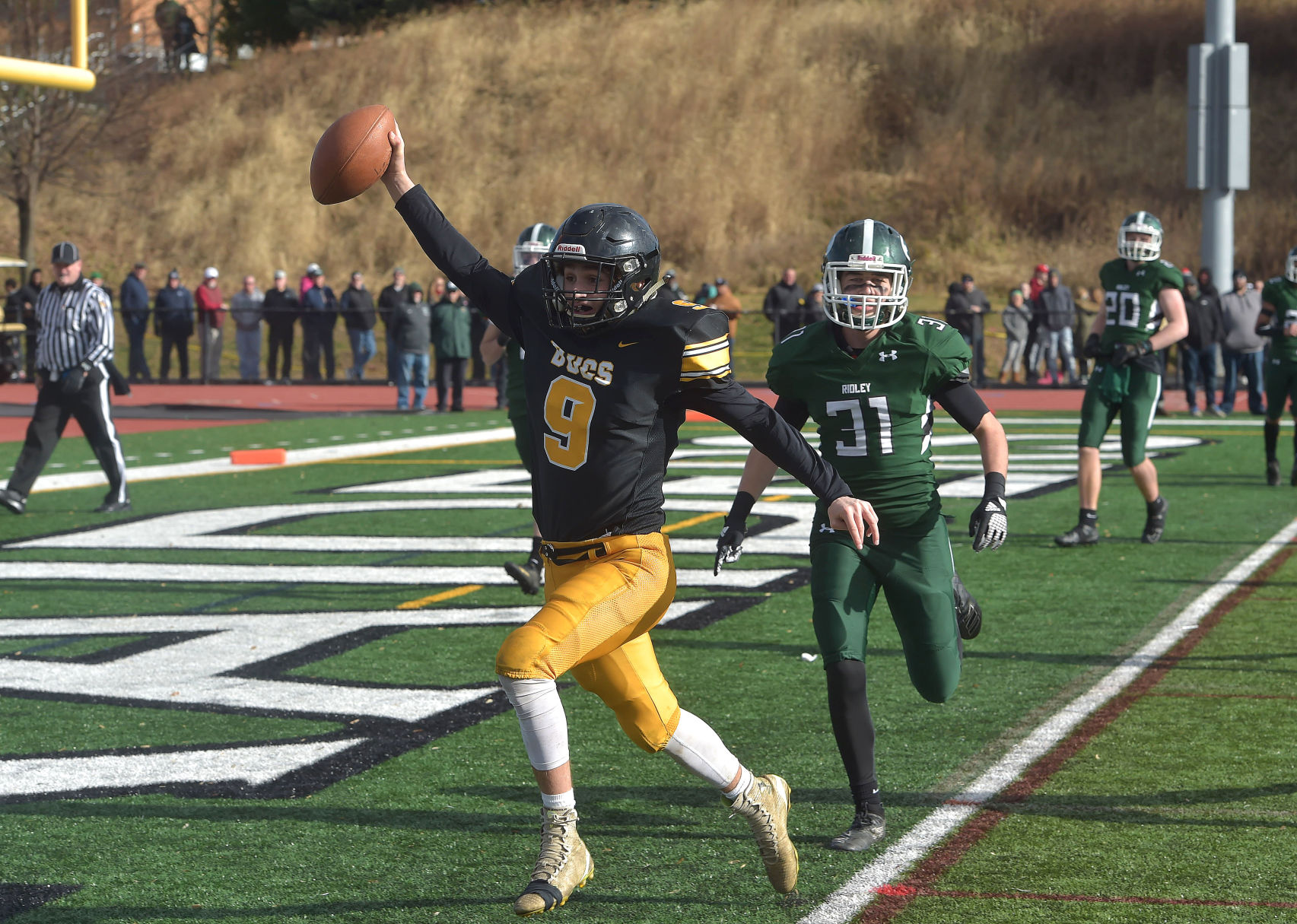 Interboro quarterback Mike Zane runs for a touchdown in the second quarter of the 52nd Thanksgiving Day matchup between the Bucs and Ridley. Interboro went on to win 28-21 to end its season on a winning note. (PETE BANNAN - MEDIANEWS GROUP)

RIDLEY — When Mike Zane first walked onto Phil Marion Field four years ago, he had dreams of one day leading Ridley to a Thanksgiving Day victory over its bitter rival, Interboro.

Zane had never had the opportunity to quarterback Ridley. His family moved to the neighboring school district, and Zane had to transfer, spending his two upperclassman years on the Bucs’ roster. So on this Thanksgiving, in his final game as a high school football player, it seemed so serendipitous that Zane was playing quarterback on that same historic field in Ridley, only doing so for the team in black and gold, not the one in green.

As it would turn out, Zane would need to guide his Bucs – the team that lost nine straight games to start the season before pulling out a first victory in a make-up game with Chichester a couple weeks ago – 97 yards to pull off a stunning upset over the Green Raiders.

“We had a 99-yard drive earlier this year against Unionville,” Zane said. “So, when we got into the huddle the first thing I said to the guys was, ‘we did it once before, why can’t we do it again?’”

It was a good question. The answer was, they could.

Interboro went nearly the length of the field in the fourth quarter in 16 plays, which included three runs and five passes by Zane, and then got some help from an absolute abomination of officiating on Ridley’s final drive to pull off a thrilling, 28-21 victory in the 51st annual Turkey Bowl between the MacDade Boulevard neighbors.

Interboro’s Sean Meyers looks to avoid Ridley defenders in the second quarter of the 52nd Thanksgiving match-up between the two teams. Interboro won 28-21 to end its season on a positive note.

Zane finished with 60 yards rushing and 96 yards passing, but most importantly converted two third downs and a fourth down conversion to keep that final drive alive.

The biggest plays on the drive were a 36-yard pass to Jeremiah Butts on third-and-15 from the Interboro 42, and a 13-yard scamper on fourth-and-three to set up the winning touchdown, a two-yard dive by Sean Meyers.

“Mike played maybe his best game in his time here,” said Bucs coach Steve Lennox, who may have coached his final game after 27 years at Interboro and 38 years as a head coach. “This definitely meant something more to him. He’s such a good kid, he’s having fun, he’s improved, and he’s like another coach out there on the field. He’s really into it. He’s very verbal out there on the field. He’s a leader. I’m very happy for him.”

Zane needed his defense to come up with one more stop in the closing minutes to secure the win, but he never expected to get an assist from the officials.

Ridley had the ball on its own 34-yard line on second down and 29. Interboro (2-9) was flagged for roughing the passer on the play, but the officials incorrectly didn’t award Ridley an automatic first down. Although Ridley did get 15 yards, the officials again blew it and furthered the down to make it third down rather than replaying second down.

“I always thought a roughing penalty was an automatic first down,” said Ridley coach Dave Wood, who was doing his best to hold back his displeasure with the officials. “It happened against us last year in a game against Springfield, so I thought something was wrong. But once they made it third down it was … it was just really disappointing.”

Ridley quarterback Jack Grace, left, is knocked out of bounds by Interboro’s Ray Scanlan in the first quarter Thursday of what became a 28-21 Bucs win over the Green Raiders. (PETE BANNAN – MEDIANEWSGROUP)

The Green Raiders weren’t able to pick up the remaining 15 yards on just two plays but should have had a fresh set of downs at midfield instead. However, the egregious pair of errors by the guys in stripes cost them a chance to tie the score.

If there was one silver lining for Ridley (7-5), it was the play of Dylan Staley, who rushed for 140 yards on 18 carries and scored a pair of touchdowns. With that total, Staley went over the 1,000-yard rushing plateau and finished with 1,101 yards and 12 touchdowns for the season, numbers that earned him a Mini Maxwell Award, presented by the Maxwell Football Club to players across the state of Pennsylvania.

The Bucs were able to jump out to a 20-7 halftime lead courtesy of three first half turnovers. Interboro forced two fumbles deep in Ridley territory that led to touchdown runs by Robert Forbes and Paul Finley.

Ridley swung the momentum in the third quarter following a spirited halftime talk from Wood and the coaching staff.

Staley scored his second touchdown of the game and Grace connected with Gavin Kingsborough on a seam route for a 16-yard touchdown to put Ridley ahead.

The Green Raiders had a chance to extend the lead on fourth down from the Bucs 3 just before the big Interboro scoring drive, but a pass from Grace to a wide open Kingsborough in the end zone was altered by the wind and fell incomplete, giving the Bucs the life they needed for the winning drive.

Lennox shrugged off rumors that he was retiring after the game, saying he just wanted to enjoy this win and would address his future down the road. But, if it was his last game, he will have finished his career at Interboro with a 12-11 record all-time against Ridley while every other Interboro coach has a combined record of 1-38 all-time in this rivalry.

“I just want to enjoy this win,” Lennox said. “It’s fun. I’ve been lucky to have chosen a career that is so rewarding.”

Burgess couldn’t have picked a better way to go out for Haverford
Cheltenham outlasts Cocalico in PIAA-5A semis, heads to first ever state final