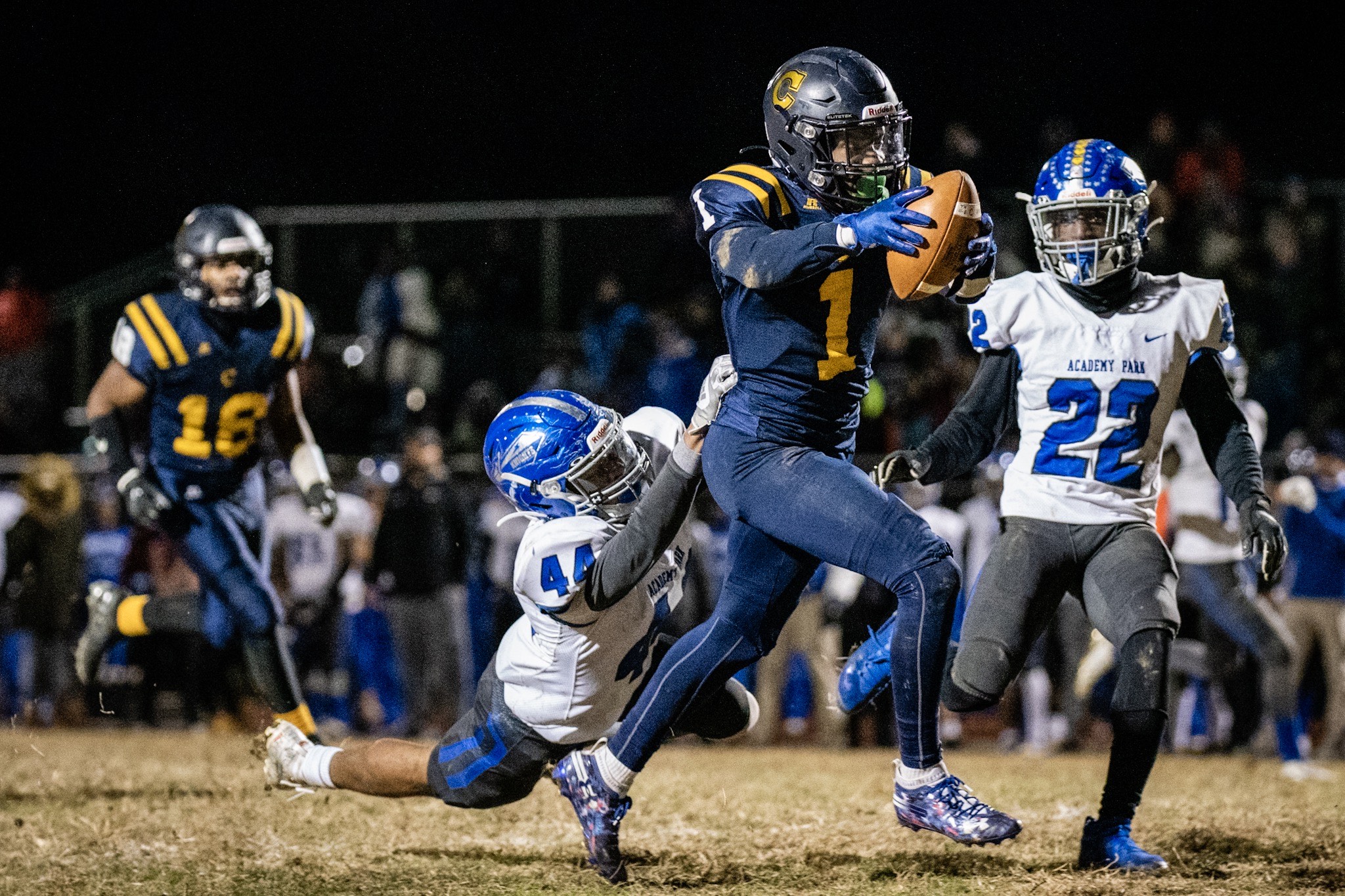 Cheltenham’s TJ Harris (1) rushes in for the go ahead score on a 25-yard completion against Academy Park late in the fourth quarter in the District 1-5A final on Friday, Nov. 22, 2019. (James Beaver/For MediaNews Group)

CHELTENHAM >> TJ Harris was ready for the moment.

“The last couple games, I hadn’t been making big plays,” he said. “This was my perfect timing to make a big play and I made it.”

With the Cheltenham football team trailing Academy Park by a point in the final minute of Friday night’s District 1-5A final, Harris streaked to the middle and hauled in a pass from quarterback Adonis Hunter. The senior wide receiver then stayed on his feet long enough to reach the ball across the goal line then fall into the end zone for a 25-yard touchdown with 28.6 seconds remaining.

“TJ had a post, he had 1-on-1 and Number 3 (Barry Brown) the safety came down, so I just knew if I put it on him, he’d be wide open,” Hunter said. “Cause nobody — and when I say nobody I mean nobody in the country can guard TJ Harris. So I know he got 1-on-1 I’m going to hit him and we just made the play.”

The Cheltenham Panthers gather at midfield after winning the District 1-5A championship game against Academy Park 43-42 on Friday, Nov. 22, 2019. (James Beaver/For MediaNews Group)

Hunter connected with Harris again for the two-point conversion, the seven-point edge proving immensely beneficial in the game’s last moments.

Penalties forced the Panthers to kickoff from inside their own 10 and after the Knights return put them on the Cheltenham 18, AP quarterback Brown hit Malik Johnson in the end zone with 16.4 seconds.

Academy Park elected to go for two and the win but the Panthers stopped Glister Threadgill’s run on a direct snap short of the goal line as Cheltenham hung on for the 43-42 victory and claim their first-ever district title.

“I’ve been saying it all along we don’t do things the normal way or the way that most people would expect,” Panthers coach Ryan Nase said. “So to win it in that fashion is kind of fitting of me, my personality and probably the personality of the team has taken on because of me. I don’t know if that’s a good thing or bad thing yet.”

#FOOTBALL: 16.4 seconds 4Q @CheltenhamSD 43, Academy Park 42. Academy Park goes for 2 & the win but the Panthers stuff the run short (looks like Darren Bennett gets in the backfield to make the play) to preserve their lead in the final minute of the District 1-5A final. pic.twitter.com/UAdtxNm2mp

Hunter ran for three touchdowns and threw for two more as top-seeded Cheltenham (13-1) outlasted No. 3 Academy Park (11-3) during a frantic fourth quarter — the teams combined for 36 points in the final period — and advanced to the PIAA semifinals to face Cocalico, which rolled past Cedar Cliff 45-7 in the District 3 final.

Brown ran for 200 yards and three touchdowns on 24 carries and also threw for 94 yards and another two scores for Academy Park, which came up just short of earning its first district title since 2016.

“Number 3’s a really good player, man,” said Nase of Brown. “He’s by far the best player we’ve seen all year. He’s the best player I’ve seen in a long time. We know coming in if we could stop him we’d be OK. It was obviously even harder that we knew it was going to be.”

“And in the second half we were able to get a couple stops and obviously including that last one there at the end on the two-point conversion which is our fault, it never should of happened. But the kids thought the just won a district championship, so they celebrated a little — not sure I wouldn’t have when I was 17.”

Both teams finished with double-digit flag totals — Academy Park with 15 penalties for 146 yards with the Panthers penalized 14 times for 131 yards.

Brown compiled 155 yards and two TDs on 14 carries in the first half but the Panthers limited the Knights QB to 45 yards and a touchdown in his 10 second-half carries. Willis caught seven passes for 76 yards and a TD.

Jamir Barnes posted 111 yards and a touchdown on 20 carries for Cheltenham, which won its 11 straight game.

The Knights went up 28-14 on the opening drive of the second half when Brown dropped in a pass to Eric Willis in the left side of the end zone for a 21-yard touchdown on 4th-and-4 at 5:08 in the third quarter. Cheltenham’s defense, however, stiffened while the Panthers offense scored the next 21 points — Hunter’s 8-yard TD run putting Cheltenham ahead 35-28 with 5:05 remaining in the fourth.

Academy Park answered to take back the lead on the following series. On a 3rd-and-14 from the Panther 32, Brown hit Willis for 14 yards and a first down and two plays later Brown scored on a 7-yard touchdown run. The Knights opted to go for two and got it for a 36-35 lead as Brown reached the end zone after taking a handoff on a jet sweep and going around the right side.

#FOOTBALL: 28.6 seconds 4Q @cheltenhamsd 43, Academy Park 36. @Tj_Harris0 catches a @AdonisHunter1 pass & takes it 25 yards for a TD to put thre Panthers up in the District 1-5A final. Hunter then finds Harris on the 2-point conversion. pic.twitter.com/8VbhlJoPkk

Driving to keep the season alive, Hunter kept the Panthers in it with an 11-yard run on 4th-and-3 from the their own 46. Four plays later, a defensive holding on the Knights on 4th-and-14 gave Cheltenham another shot with a 4th-and-4 and Hunter found Jamir Barnes for seven yards.

“God telling us we have anything chance, that’s just destiny,” Hunter said. “I’ve been saying all year, man, it’s destiny. I said early in the locker room it reminds me of the Patriots and the Eagles, we never won all these years we never won nothing and it’s just destiny. This is for us, it was meant for us to win this and we went out and did it.”

After Hunter hit Barnes for five more, the Panther QB connected with Harris for the 25-yard score then found Harris on the two-point conversion to make it 43-36 at 28.6 seconds.

A pair of unsportsmanlike conduct penalties on the Panthers after the touchdown and another flag for offsides had Cheltenham kicking off at its own eight. Academy Park took advantage, returning the kickoff to the 18 with 22.3 seconds and on the first play Brown found Johnson for the 18-yard score. The Knights went for two again but this time where stopped — Darren Bennett getting to Threadgill in the backfield with Zach Gaffin and Nasir Carson helping to finish the play and preserve the one-point edge.

Academy Park’s Barry Brown (3) used his legs as well as his arm against Cheltenham in the District 1-5A final on Friday, Nov. 22, 2019. (James Beaver/For MediaNews Group)

Cheltenham recovered the onside kick and one kneel-down later, the Panthers were celebrating with the district trophy on their home field.

“It’s the best,” Harris said. “I can’t even explain it. We’ve been working so hard for it and it showed tonight.”

Academy Park took a 7-0 lead when Willis scored on a 6-yard touchdown run at 1:49 in the first quarter. Cheltenham, however, tied it 44 seconds later on Barnes’ 12-yard TD run.

The Knights regained the lead on their next series, Brown starting the drive with a 56-yard run down the Panther four and two plays later scoring from a yard out at 11:55 in the second quarter. After forcing a Cheltenham 3-and-out, Academy Park made it 21-7 as Brown dashed to the end zone on a 51-yard run at 7:49.

Cheltenham’s TJ Harris (1) and Jon-Marc Foreman (18) celebrate after Harris’s go-ahead touchdown in the waning moments of the fourth quarter during the District 1-5A final on Friday, Nov. 22, 2019. (James Beaver/For MediaNews Group)

Cheltenham cut the margin to 21-14 after a blocked punt set it up at the Academy Park 25. On 4th-and-1 from the six, the Panthers drew the Knights offsides and on the next play Hunter ran for a 3-yard TD with 57.1 seconds.

Academy Park looked to have a 17-yard Brown to Willis touchdown just before the first half but the Knights were flagged for offensive pass interference and the Knights went into break up seven.

But Academy Park did get the lead up to 14 on the first series after halftime — a 12-play, 62-yard drive that ate up 6:50 of clock and capped by Brown’s 21-yard pass to Willis on fourth down.

Sam Sykes turned a Hunter pass upfield for a 33-yard touchdown at 4:00 in the third quarter. The Panthers forced an AP 3-and-out and pulled even on their next possession when Hunter crossed the goal line from a yard out at 10:58 in the fourth. After its defense came up with another 3-and-out, Cheltenham proceeded to go up 35-28 on a nine-play, 55-yard drive Hunter finished by rolling right and plowing into the end zone from 8 yards out with 5:05 left in regulation.