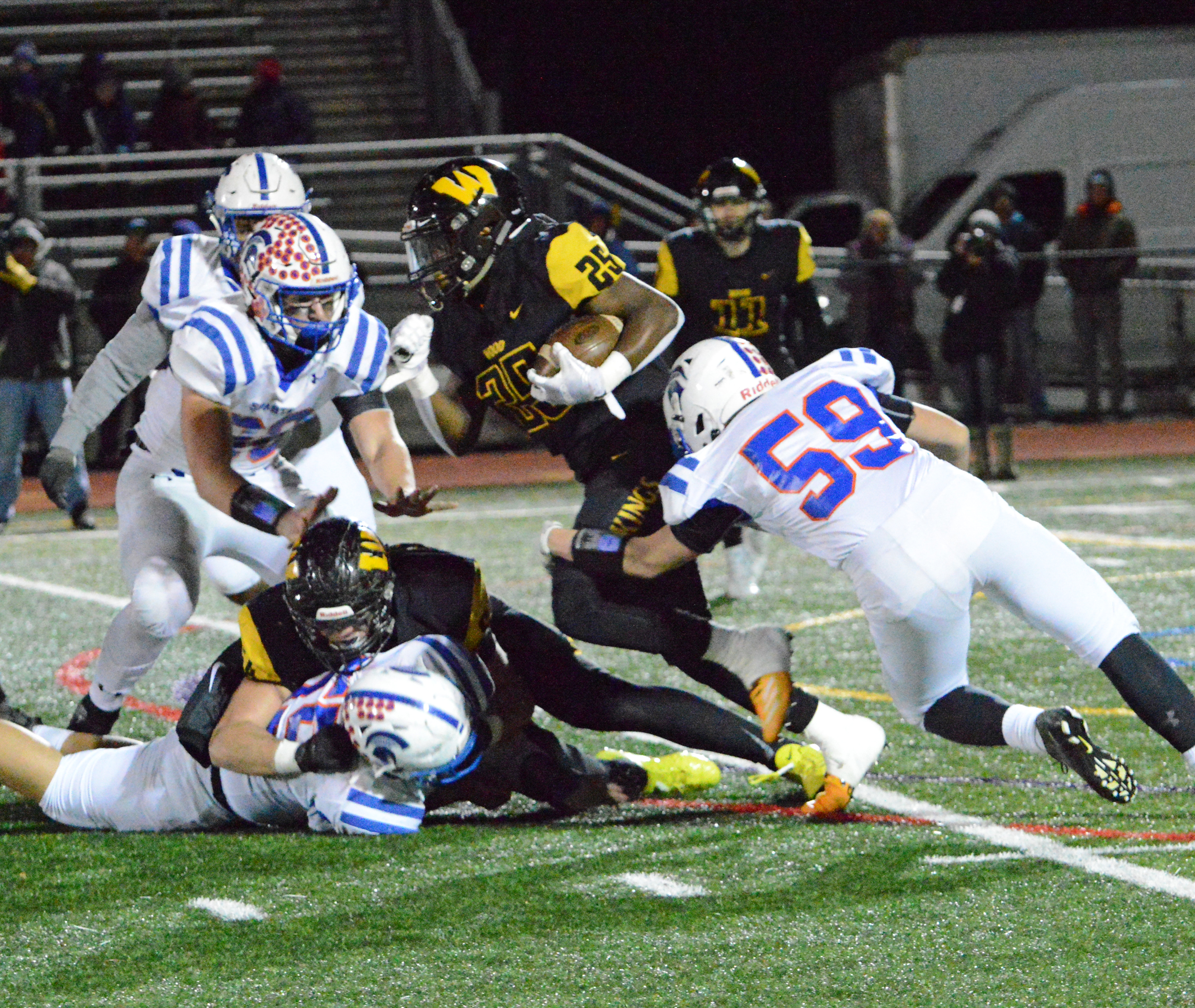 Through two postseason games, the Vikings’ defense had been stellar while the offense had caused itself quite a bit of problems and was eager to get back on the right course. Figuring the best way to top run-heavy Southern Lehigh would be to beat it at its own game, Wood’s offense didn’t mess around.

The offense did more than its share, backing up another strong defensive outing as Wood topped the Spartans 41-7 in their PIAA-5A quarterfinal Friday night at Pennridge.

“This was one of our more complete games when you talk all three phases,” Wood coach Kyle Adkins said. “I thought we just got a solid effort across the board.”

Smith, a senior, ran for 250 yards a week ago but found yardage much tougher to gain against Wood. The Vikings (9-3) held Smith to 77 yards on 18 carries and limited the Spartans to just 150 yards on 37 carries.

“This team has been physical all year so we had to bring it and be physical with them,” senior offensive/defensive lineman Charley Mininger said. “They run their version of the Wing-T extremely well and the only way to beat it, on the defensive line in the trenches, you have to get after it harder then they’re working.”

“They have one of the best offensive lines we’ve seen all year so it was a major challenge, especially for our guys up front,” Adkins said. “You see all the motion and mis-direction, so you have to be really disciplined but also physical and get off blocks and make tackles and it looked like we did a decent job of it.”

On the other side, Costello nearly had the same amount of rushing yards himself. The junior rolled up 125 yards on just 11 carries with two touchdowns and as a team, Wood accrued 283 yards on the ground.

Wood won the coin toss and took the opening kick, giving the offense a chance to make its statement early. Aided by a 22-yard run by Costello on 3rd-and-8 inside Southern Lehigh territory, Wood went 80 yards and took a 7-0 lead on Cardel Pigford’s 6-yard run.

After a tip-drill interception by the Spartans, Wood’s defense had to make a stand in their own territory. The Vikings gave up just five yards, then forced a fourth down incompletion to prevent Southern Lehigh from gaining any momentum.

Archbishop Wood’s Cardel Pigford raches the ball over the goal line for a touchdown during the Vikings’ PIAA-5A quarterfinal against Southern Lehigh on Friday, Nov. 22, 2019 at Pennridge High School. (Debby High/For MediaNews Group)

Wood authored another long drive, getting a 46-yard run from Costello to keep it moving before the junior went in from four yards out to make it 14-0. Southern Lehigh fumbled the following kickoff with Wood’s AJ Minners recovering for a short field.

Shane Collier, who had a monster game at linebacker, would cap the drive with a one-yard touchdown run.

“We had a good surge, the linemen dominated the line of scrimmage and all we had to do was run behind them,” Costello said. “We could make one move and go. It was a lot easier playing with the lead, the past two games we haven’t started off too hot, so getting that start gave us good motivation.”

Southern Lehigh took over with 5:26 left in the second quarter but missed a 50-yard field goal at the halftime buzzer. Undaunted, the Spartans took the opening kick of the second half and went on a 71-yard drive that ended on Smith’s two-yard scoring run with 5:49 left in the third quarter.

Wood answered immediately with a 75-yard drive that ended on Collier’s second one-yard touchdown run of the game. The junior, who starts at inside linebacker, is one of many first-year starters who have improved greatly over the course of the season.

“I’ve grown a lot, last year we had great linebackers who helped coach me up and I took their advice and went with it,” Collier, who added a sack among a heap of tackles, said. “I knew I had a chance to be one of the top inside guys, but only if I worked for it.”

Mininger is a senior, but noted he missed most of last season with an injury so counts himself among that group of players who had to grow this fall. The linemen feels like the entire has come a long way since preseason and while there may not be a standout, it’s an overall solid group.

Costello believes it too, noting the depth at running back and versatility on offense. Ryan Woertz had a catch for 32 yards and rushed twice for 49 yards while Andrew McHugh, a sophomore, had 57 receiving yards including a 35-yard touchdown. Costello would cap the scoring with a 32-yard run that put him over the century mark for the night.

“Whenever you talk about a young team, there’s going to be a decent amount of improvement from game one to later in the season,” Adkins said. “They’re getting their feet wet and this is the first time they’re getting real varsity game experience. I think they key with any team, whether it’s all seniors or young guys, is ‘are you improving week to week?’”

Wood will face the winner of Saturday’s game between Gateway and Peters Twp next weekend in the state semifinals.

“We’re very motivated especially coming off last year expecting to win a state title and losing in the semifinals,” Costello said. “We’re hoping to get back there and win it for the coaches and all the guys here on this team.”