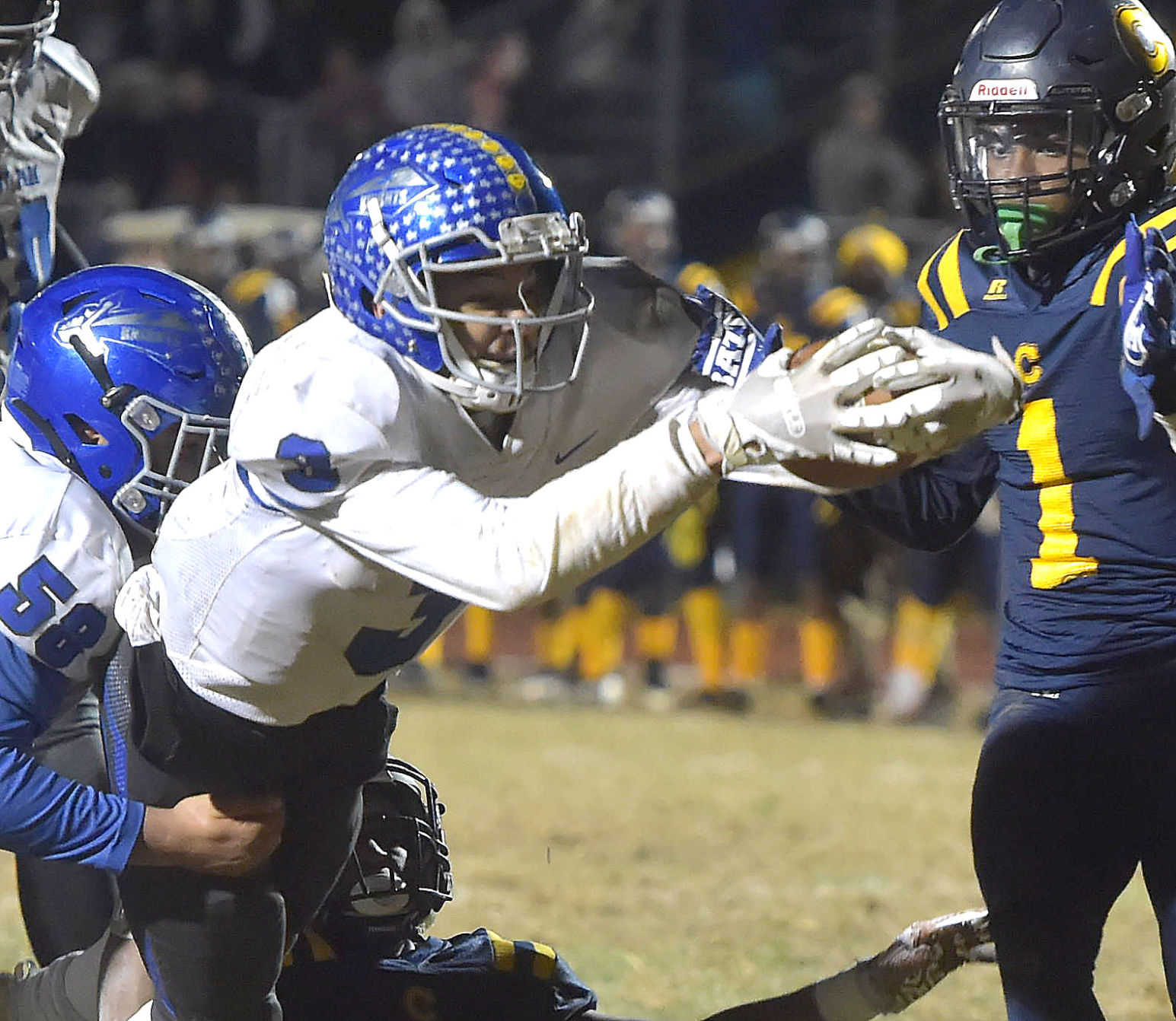 Academy Park quarterback Barry Brown dives into the end zone for a touchdown late in the fourth quarter. It wasn't enough as the Knights dropped a 43-42 decision to Cheltenham in the District 1 Class 5A championship game Friday night. (Pete Bannan/MediaNews Group)

CHELTENHAM — The final play in Friday night’s District 1 Class 5A final was a curious call that Academy Park coach Jason Vosheski would like to have back.

Why wasn’t the ball in the hands of his outstanding senior quarterback, Barry Brown?

Brown had thrown an 18-yard scoring strike to Malik Johnson to pull the Knights within one point of top-seeded Cheltenham with mere seconds to play. Brown was unstoppable all night, both on the ground (225 yards, 25 carries) and through the air (7-for-12, 94 yards).

Academy Park’s Malik Jackson catches a touchdown with 16 seconds left Friday. The Knights went for a two-point conversion but came up short in a 43-42 loss to Cheltenham. (Pete Bannan/MediaNews Group)

Brown accounted for a touchdown scamper and two-point conversion on the Knights’ previous score, which gave the visitors a brief one-point lead with 1:48 to go.

Cheltenham stormed back, leaving Academy Park with 22 seconds (but glorious field possession due to three Cheltenham penalties) to score the winner. AP took over at the Panthers’ 18-yard line. Brown needed only one play to find Johnson alone in the end zone.

But the Knights did not find the paydirt when they decided to roll the dice (again) and go for two points and the win.

Out of the pistol, seldom-used running back Glister Threadgill, who has battled injuries along with several other key players this season, lined up where Brown normally does behind the center. Threadgill ran straight ahead but was stopped a yard short of the goal line, punctuating a heartbreaking, 43-42 loss for Academy Park.

Cheltenham erased a 28-14, second-half deficit to win the District 1 Class 5A championship. Academy Park lost out on celebrating the program’s fourth title in seven seasons.

Threadgill out of the pistol is STOPPED on the 2pt conversion. … Cheltenham holds the lead 43-42… #Delcofootball pic.twitter.com/fyFUlRNIj5

But one can only wonder why didn’t Brown have the ball when it mattered most.

Vosheski fielded the questions and was concise with his answers.

“But it more so has to do with me second-guessing myself, thinking they would be ready (for Brown to get the ball).

“They won on decision in Round 10, if you want to use the boxing analogy. They played better than we did when it mattered. If we’re going to let up 43 points … the fact that we even scored there at the end was amazing.”

Brown, who was always the first one to volunteer for reporter interviews with a big smile on his face after Academy Park wins this year, walked away in tears, flanked by consoling family members and friends. He didn’t want to think much about the last play of the night or why the ball wasn’t in his hands.

“I guess that final play wasn’t for us to win,” Brown said. “I trust the coach’s call. I just love this team, man. Everybody did what they did on this field, they gave it their all. Even with blood on their jerseys, they were giving it their all.”

The first half was mainly dominated by the Knights, whose offensive line opened gaping holes for Brown and running backs Utensee Nankay and Hykeem Green, who were called upon early and produced. Eric Willis, who caught seven of Brown’s eight passes for 76 yards, found the end zone on a seven-yard run in the first quarter. Brown added scoring runs of one yard and 51 yards to make it 21-7.

Adonis Hunter connects with TJ Harris and Cheltenham is back on top. Wow what a finish to this one!

As the first half was nearing a close, the Knights were in a good spot, as their defense kept Cheltenham quarterback Adonis Hunter and his playmakers at bay. That included 1,000-yard running back Jamir Barnes, who did most of his damage after intermission.

But when the Panthers needed a spark,  they got one at the perfect time.

Late in the second quarter, Avin Grant blocked a punt by Brown and the Panthers recovered deep inside AP territory. Hunter eventually found the end zone on a three-yard run with 57 seconds to go.

At that moment, the Panthers knew they were back in the battle.

“We live off turnovers,” said Cheltenham wide receiver T.J. Harris, who caught the game-winning TD pass and two-point conversion. “The only time we were down was to Abington and that was our only loss. We learned a lot. We feel like we’re never down.”

Hunter was 5-for-10 passing for 52 yards in the first half. He heated up after halftime, completing 11 of 16 passes for 142 yards. He had two TD throws and a pair of scoring runs in the final 24 minutes of regulation.

“I said it all week, Academy Park is a lot like us and they have great athletes,” Hunter said. “It was a great game and a shoutout goes to them, especially to No. 3 Barry Brown who is a hell of a player. They’re a great squad.”

Brown’s scoring connection to Willis capped a brilliant drive to open the third quarter. The Knights reasserted themselves. The offensive line of Isaiah Rogers, Xavier Newman, Cole Root, Jaydin Allen and Tajh Harmon was excellent for large chunks of the game. AP ran for 289 yards, its best output since a Week 2 victory against Pottsgrove.

Considering the result, though, the final play is one big what-if the Knights will live with for quite some time.

“Both teams played a great game, but we didn’t do enough,” Vosheski said. “And you can second guess it.”