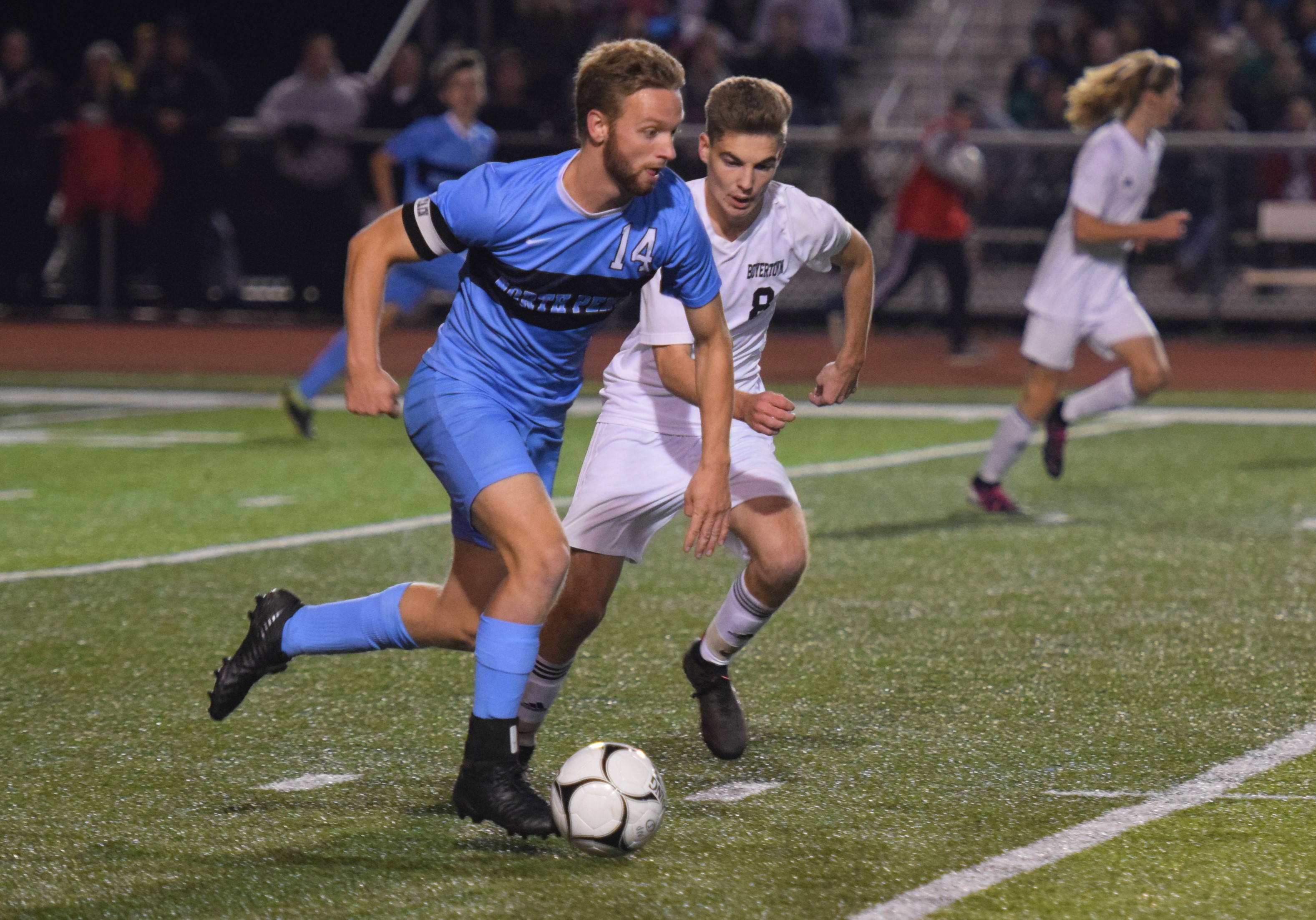 Prior to his senior soccer season at North Penn, Carter Houlihan went to his coaches with a suggestion.

Initially the plan was to have Houlihan play the same attacking midfield role he occupied as a junior but the senior, who always had freedom to roam, thought he could more in a different position. It wasn’t a selfish suggestion meant to inflate his totals, just one Houlihan felt would best help him guide the Knights to their first state total.

The coaches liked the idea and Houlihan went out did just what he planned to, leading the way as North Penn captured its first District 1 and PIAA championships.

A brilliant senior season capped a tremendous high school career and Houlihan has been selected as the Reporter/Times Herald/Montgomery Media Boys Soccer Player of the Year.

“My senior year, it was either do-or-die and I think it finally sank in during preseason this was the year to get it done,” Houlihan said. “We’ve had great teams in the past, but this year was my time to be a senior leader, a captain and not do things my way, but there to help the coaches, give input and try to lead this team.”

North Penn’s Carter Houlihan (14) pushes downfield on the way to another North Penn goal against Pennridge  during their District 1-4A second round game on Thursday, Oct. 24, 2019. (James Beaver/For MediaNews Group)

Knights coach Paul Duddy has been at it long enough to recognize talent when he sees it and he knew right away during Houlihan’s freshman year he had a special talent. With an experienced team already in plan, led by Mike Kohler in the attacking midfield spot, the coaches wanted to slot Houlihan in as a center back.

The then-freshman willingly accepted the role, started his first varsity game and was a lineup fixture from there on out. Duddy saw Houlihan only get better with each passing year, but also be content as a supporting player behind Kohler and then Luke McMahon the next two seasons.

“Carter will always do what’s right for the team or what we think is right for the team,” Duddy said. “We give him some freedom, believe me, but he is so dangerous and as we saw many, many times this season, he can beat almost anybody one-on-one and he can take on two, sometimes three defenders.”

For Houlihan, soccer was an immediate love but he may not have found the path without his older sister Riley. Riley, three years older than Carter, played soccer, basketball and softball before opting to focus on soccer and her brother would follow suit.

A four-year varsity player at North Penn, Riley Houlihan would also be a strict critic of her brother’s play. With the benefit of time, Carter appreciates what his sister did for him by wanting more of him.

“She was always hard on me and I never understood it until a little bit ago,” Houlihan said. “It would annoy me that she was always telling me what to do on and off the field, she would give me criticism in games and criticism in life and she wanted me to learn from her experience for me to be the best player and person I could be.

“Now that I get it, I really appreciate that.”

Growing as a player with his club team at Future Player Academy, Houlihan and his North Penn teammates weren’t able to find the success they desired for the high school program. A second round district exit as a sophomore, coupled with a quarterfinal loss and subsequent exit in the playbacks as a junior lit a fire in Houlihan preparing for his senior year.

He joined a new club team in Lehigh Valley United’s U19 side packed with other local players and helped them win a national title at the end of July. While he played center midfield during the summer run, Houlihan still felt his best place at North Penn would be as a forward out wide.

“I thought I could be more effective and get more goals and I knew we had a great midfield trio with Josh (Jones), Roman (Ilvosky) and whoever else would be in the other spot, Ryan Stewart, John Graber, Liam Gorham, they all got the job done,” Houlihan said. “It allowed me to get more space and more opportunity up top.”

The Knights took off, led by a motivated senior class and rebounded after an early season loss to CB East on Sept. 13. North Penn wouldn’t drop a point again the rest of the way, finishing the season on a 22-match win streak that included a fourth-straight SOL Continental title, the District I title and finally the state title after a hard-fought 2-0 win over rival CB West.

Houlihan, who scored both goals in the state final, authored numerous moments of brilliance during the season. The senior finished the season with 30 goals and 15 assists, scoring eight times in the postseason but was most proud of what his entire team accomplished in making so much history for the program.

“I think he was just on a mission to say we’re not going to let that happen this year,” Duddy said. “He was on a mission to carry the team but he was willing to set up goals. If it’s two points for a goal, there’s 60 and 15 from the assists, that’s 75 and that’s almost unheard of for a high school season. It’s a credit to him and his willingness to work hard.

“He was absolutely our leader and he set the tone for us.”

Houlihan’s next step, after one more club season, will take him to Lafayette next fall. Duddy said he wouldn’t be surprised to see Houlihan force his way onto the field next season noting the senior’s ability but also his desire to never settle and keep pushing to get better.

Between club soccer and playing at North Penn, Houlihan’s made some of his best friends through the game. He had the chance to go up against a lot of them this fall like CB West’s Bailey Moyer in the state final and Abington’s Nevin Baer and Reese Gibbs in the district quarterfinals.

That connection is something Houlihan said he treasure while playing for the Knights. While many top players opt to play academy soccer instead of high school, Houlihan said there’s nothing that could replace the feeling he gets seeing the school trophy case with their state title already placed inside.

“I would say just have fun,” Houlihan said. “Without having fun, this team wouldn’t have been able to accomplish what we accomplished this year. We were all excited to go to practice or go to the games every day. Making the most out of it and enjoying it would be the best advice I could give.”