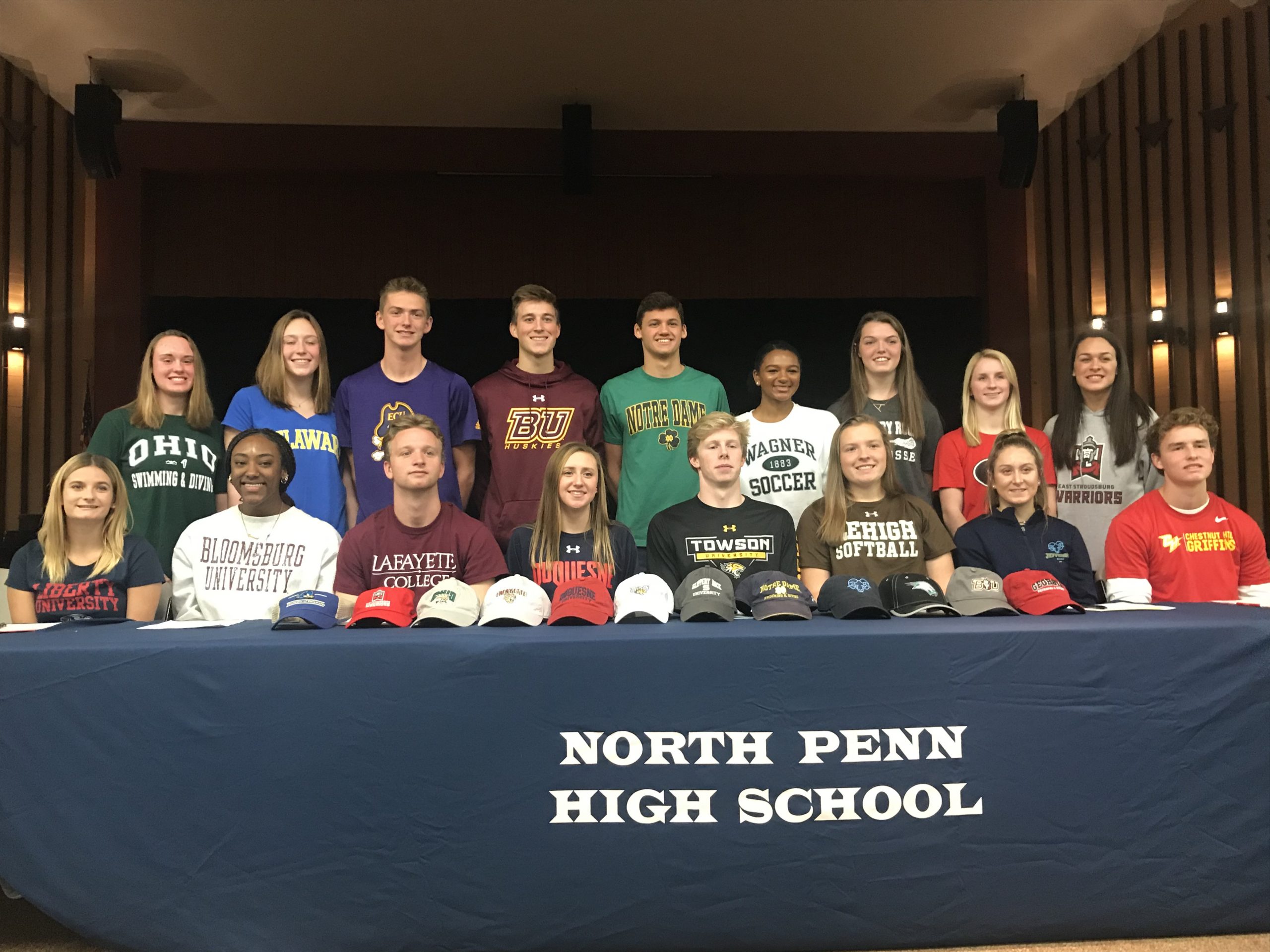 TOWAMENCIN >> Answering what it meant to sign his National Letter of Intent to Lafayette College, North Penn boys soccer’s Carter Houlihan’s showed his timing for comedy maybe as good as his on the field.

“Well, now I don’t have to try in school for the rest of senior season,” he said, earning a good laugh — and one counter of “Wrong” — from the audience in the North Penn High School auditorium.

But after a beat, Houlihan — who scored two goals as the Knights won the PIAA 4A title last Friday in Hershey — was able to reflect on all the work needed to get him to this moment.

“I put a lot of effort and time into soccer, with playing different teams, the high school,” Houlihan said. “It’s just really rewarding knowing that all this effort and time has paid off.”

It paid off for Houlihan and the 16 other North Penn student-athletes in attendance Monday morning as the school honored the group for their college commitments.

“It’s really special to me and everyone here,” said Kolby Barrow, heading to Bloomsburg University for baseball. “All the work we put in and dedication, it finally paid off so it really means the world.”

Of the 17, seven were members of the North Penn’s swim program, including a pair of divers in Meghan Wenzel — heading to the University Georgia — and Maddie Freece, who committed to Liberty University.

“For me, I think it really means my hard work and all the works and hours I put it, the sacrifices I’ve made actually pay off,” Wenzel said. “And now they can help me in my life to come.”

Wenzel took second at last year’s PIAA 3A championship while Freece was just behind in fourth.

“I chose Liberty because of the atmosphere and everything the school had to offer,” Freece said. “And I couldn’t picture myself anywhere else.”

Sean Faikish, who took gold at 2019 states at the 200 individual medley, is set to attend Notre Dame — picking the Fighting Irish over Auburn and Virginia — with an eye on a majoring in political science.

“The University of Notre Dame, they offered not only athletically but also academically everything that I was looking for,” Faikish said. “Swimming can only take you so far so I had to look at beyond swimming and all the connections and the alumni association that they have there is everything I was looking for.”

Luke Schwar, who swam on NP’s 400 free relay that took silver at states, committed to Towson.

“I grew up in the pool so it’s cool to just go to college for it,” Schwar said.

Caroline Dunigan always had the goal of swimming in college and made it official when she signed with the Ohio University.

“It’s always been a dream of me to swim in college,” said Dunigan, who took second in 3A states in the 50 free last year. “And since I’ve been committed since May it’s like finally getting to put my name on that paper means a lot so I get to finally call the team that I’ve spent a bunch of time with family.”

Nicole Chiappa, meanwhile, did see herself in the pool past high school but it set to be a member of the University of Delaware’s swim team.

“I was never really looking to swim in college,” said Chiappa, who is looking to major in nursing. “I just really like the school and it’s been a dream for a couple years now. And I didn’t think it was going to work out, so when it finally did it was extremely exciting.”

Like Chiappa, Julia Davis is looking towards a future in nursing as she swims at Duquesne University.

“I chose Duquesne because I loved the coaching staff and the team atmosphere,” she said. “It’s a lot like it is here and that’s what I liked about it.

North Penn girls basketball had a pair of PSAC commitments as Carley Adams is heading to East Stroudsburg while Valerie McGriff decided to attend Bloomsburg.

“I chose Blooms because every time I went, I felt very welcoming,” McGriff said. “It felt very home-y, like the girls there barely even knew me but they treated me I was already a teammate and I loved that feeling and I could see myself being there for four years.

Both Adams and McGriff said they were looking to major in psychology.

“I chose East Stroudsburg because the second I was there, it felt like home,” Adams said.

“I’ve been committed now for over a year so it’s really crazy to finally think that now is the time I actually get to sign the paper instead of just have that  thought in the back of your head, ‘I can’t get hurt, I can’t get hurt,’” Greaney said. So, now it’s just a really great feeling to sign the paper, it’s there, you’re going there no doubt. It’s a great feeling.”

The softball duo has played every game for NP since their freshman years. Greaney holds the program’s career records for home runs and walk while Juckniewitz is Knights’ career runs scored leader.

“The reason I chose Jefferson was because of its academic options,” Juckniewitz said. “And once I got a feel for the softball program it was really exciting to know that’s what I wanted.”

Barrow, a three-spot athlete — the senior plays football, basketball and baseball — is heading to Bloomsburg to join the Huskies baseball team and also his sister Mikayla, who plays on BU’s field hockey squad.

“When I went on my visit, everyone was really welcoming,” Kolby Barrow said. “I loved all the players and the coaches. And my sister (Mikayla) also goes there, it’ll be nice to spend time with her too.”

Starrett Vesper was a member of North Penn’s boys soccer state champ team but Vesper will compete in the pole vault in college for East Carolina University’s track and field team.

“I didn’t know it would be in track and field but ever since I was little it’s always been a dream of mine to continue playing sports and continue my athletic career at the next level,” Vesper said. “And I’m just really fortunate and I guess proud that my hard work’s paid off.”

“I chose the school because it was right outside New York City,” Sheehy said. So I can have a lot of connections afterwards and the academics were very intimate so I’d be able to have personal, one-on-one with my teachers and the coaching staff and the players were very welcoming.”

NP boys lacrosse’s Jake Homan will head to Chestnut Hill College and is looking to become a health science major.

“Right from the start, from the day I met the coaches they were so friendly and welcoming,” Juska said. “And every time since I’ve been on campus it’s felt like I’m already a part of the team.”