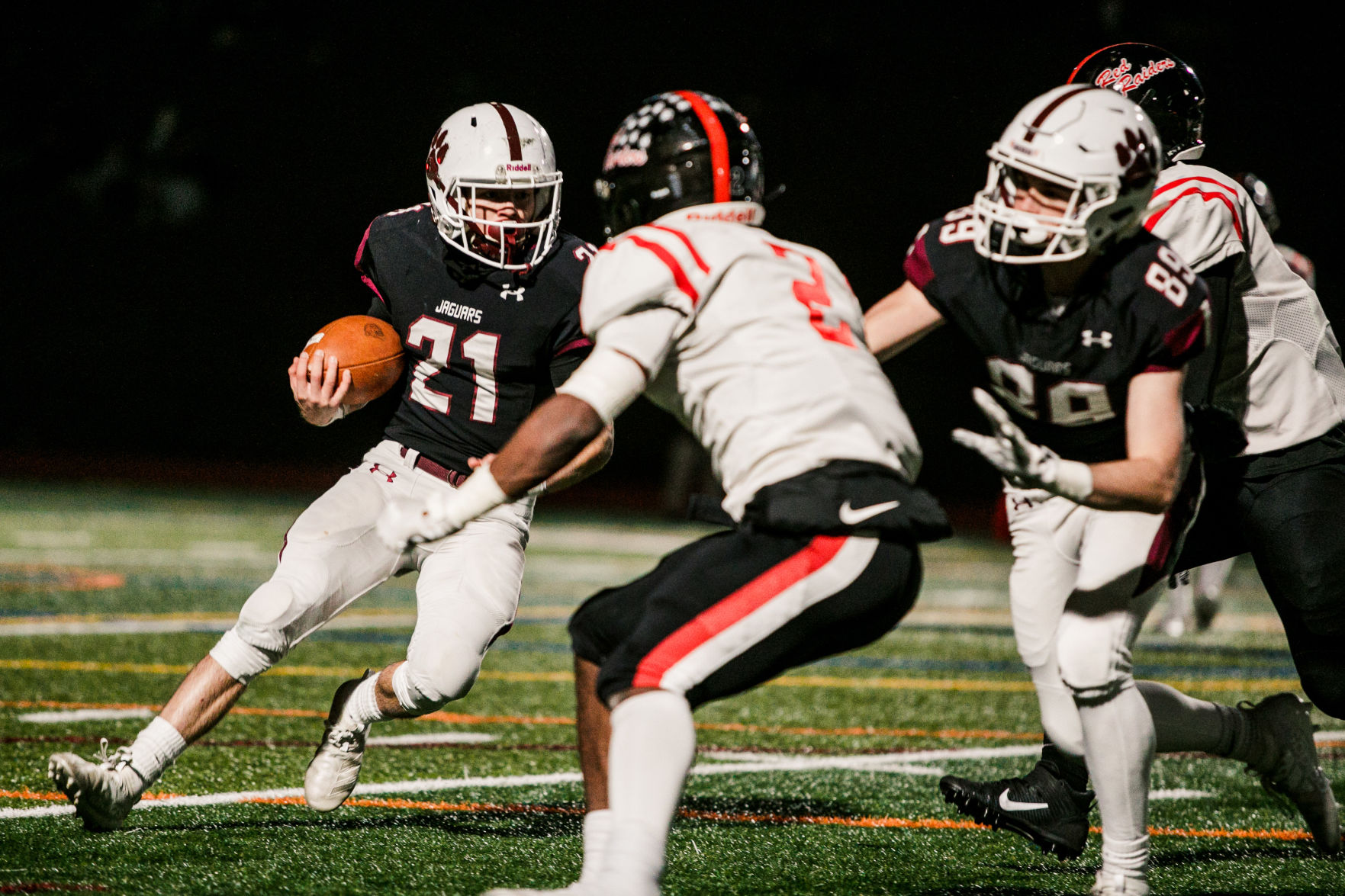 Garnet Valley running back Greg Reynolds cuts back against Coatesville Friday night. Reynolds ran for 38 yards as the Jags' rushing game was bottled up in a 48-27 loss to Coatesville in the District 1 Class 6A semifinal. (NATE HECKENBERGER/FOR MEDIANEWS GROUP)

For the third year in a row, Ortega and the Red Raiders eliminated the Jaguars from the District 1 Class 6A tournament. He’ll be happy not to see Garnet Valley anymore.

With a 48-27 victory, the Jaguars (11-2) saw another dream season end at the hands of mighty Coatesville, which will attempt to win its third straight championship next week at top-seeded Downingtown West.

“That’s tough for them to lose to us three in a row, but they’re such a great team,” Ortega said. “They’re probably the most physical team, as you can see, that I played against. They play their hearts out every year we’ve played them and they do a great job defensively and offensively.”

“We believe in each other, we believe in our coaches and we just know how to come out and get big wins like this,” said Ortega, who threw for 188 yards and two touchdowns, while running for 184 yards and three scores on 24 carries.

The Central League champion Jaguars opened up its playbook, leaning on the passing of quarterback Ryan Gallagher. GV averaged a Delco-best 345 yards rushing this season, but was held to only 145 yards on 43 carries.

Defensive stops kept the Jags alive. They came out of the locker room in the second half with fire and scored back-to-back touchdowns to grab a 27-20 lead four minutes into the third.

Too many GV turnovers and clutch playmaking by Ortega and wide receiver/defensive back Dapree Bryant helped the Red Raiders get back on track.

“We knew we were going to have to play a great game against a really good team.” GV coach Mike Ricci said. “Like I told our guys in the huddle after the game, we had a great week of practice and we came in really prepared. We did everything we worked on and tried to control what we could control. To Coatesville’s credit, they were able to make some big plays when they needed to.”

Garnet Valley’s Jake Morin is in disbelief after dropping a pass on fourth down Friday night against Coatesville.

Gallagher’s five-yard scoring scamper tied the game at 20 early in the third quarter. GV’s defense rattled Ortega on Coatesville’s first series of the third and forced a strip sack. Senior linebacker Jake Morin and linemen Alex Westburg, Matt Gabel and Mitch Mesaros got into the backfield often and had plenty of clean hits on Ortega. At times, Ortega would bounce off the tackles, roll out and complete a pretty pass or take off running. Other times he was sacked or forced to throw the ball out of bounds.

“They did a lot of great things and we had to dig deep and come together as a team,” Ortega said.

After the turnover, Gallagher threw a strike to Shane Mulholland across the middle of the field. Mulholland made a leaping catch and ran into the end zone, a 30-yard catch and run to give the Jags a 27-20 advantage.

The next possession was critical for both teams.

It came down to a second down and nine at the Coatesville 41-yard line. Dapree Bryant, the Raiders’ outstanding wide receiver, hadn’t made a catch all game. Instead, Ortega relied upon Artie Burges, who snagged two first-half touchdown passes and finished with four catches for 110 yards.

“I knew they were going to key on me in this game,” said Bryant. “I trust my wide receivers to step up and make plays.”

Bryant caught a screen pass, juked several tackles and darted 50 yards to the Garnet Valley 10. Moments later, Ortega ran across the goal line to even the score.

That’s when the game — and season —  started to unravel for the Jaguars. A fumble on the next play from the line of scrimmage gave the Raiders a short field. Ortega sprinted 36 yards to give his team the lead for good.

Bryant sealed the win with a pair of interception returns for touchdowns late in the fourth quarter.

The chances were there for the Jaguars. This was a winnable game, but they left the door slightly ajar and Ortega and the Raiders kicked  through it.

Afterward, Ricci met with his players for more than 20 minutes. Many of the Jags’ seniors were inconsolable.

Morin, who had a 37-yard touchdown catch and flourished at linebacker, never wanted to imagine that it would all end with another loss to Coatesville.

But this defeat shall not define the Jags, who captured their second straight Central League title and advanced to the final four of the Class 6A tournament for the fourth year in a row.

“We came together throughout the season extremely well,” said Morin, who will play lacrosse at Penn State. “I love everyone on this team. It just sucks. I’m going to cherish every moment I have with these guys, forever.”

Bonner-Prendie fumbles away a chance to put a scare into Imhotep
McCaffery: For Gallagher and Haverford, a season’s worth of lasting memories