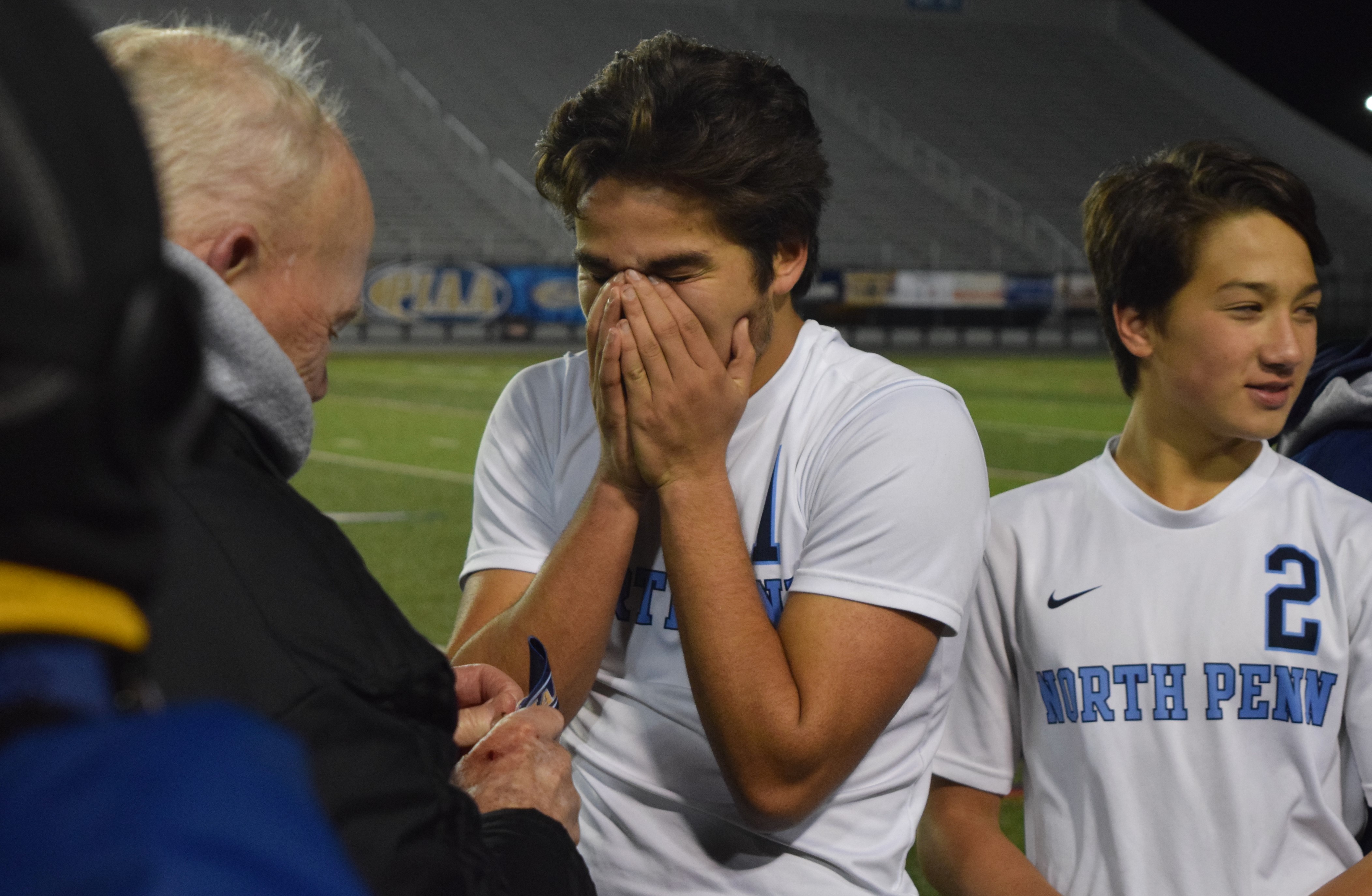 On top of trying to help his team win a state title, the North Penn senior wanted to make sure one teammate unable to be in Hershey would get to celebrate later. With twin brother Jamie back home too sick to even make the trip, Ryan was determined to finish the mission.

Thanks to depth cultivated all season, the Knights were able to bring home a title, with an extra medal packed for Jamie Stewart.

“Any time a teammate can’t play, it’s always devastating but him being my brother just made this that much more personal,” Ryan said, his own medal draped around his neck. “The entire team wanted to come out here to win it for him, win it for all of us and all the alumni who didn’t get a chance to play for this.”

Jamie was there in spirit, as Ryan and younger brother Alex had a cutout headshot of their brother dressed in his No. 8 jersey and the senior attacker would have been proud to see his teammates step up in his stead. Senior Pat Chester started in Jamie Stewart’s place and delivered a couple excellent crosses that led to first half chances.

“We know that even if one our starters can’t play, we have someone to step up and do just as well,” Ryan Stewart said. “The best part of our team this year has been the depth and being able to put people in as subs and have no drop off.”

Sean Flatley was another reserve who made an impact, nearly scoring in the first half before putting a shot across the front of goal. Starett Vesper, Ryan Mindick and Colin Staab also came in for some important minutes,

While not a reserve, junior Roman Ilovsky has also been a critical but unheralded piece to North Penn’s puzzle. The midfielder has been an adept ball-winner and helps provide Josh Jones cover to roam forward as an offensive option.

Carter Houlihan may have buried the two goals Friday night, but he adamantly propped up the contributions of his teammates.

“I could say I did this all myself but it’s just absolutely not true,” Houlihan said. “Every single guy on this team played a part in this season. Everyone filled their roles. We were a little worried going into the season after losing Luke McMahon, Aiden Jerome and all those guys and everyone coming back stepped up tremendously.

“Just because I had the captain’s armband on didn’t mean there weren’t other leaders on the field.”

Central Bucks West coach Stefan Szygiel noted North Penn’s depth was a major part of what made them so hard to slow down.

“Carter gets the attention but you have to look at the entire roster and realize a lot of these boys, even boys who weren’t on the field, grew up together and they had that extra special bit of something and no one realizes that,” Szygiel said. “It wasn’t just Houlihan. He produced two brilliant moments on the dribble, but their team is more than that.”

No player ever wants to lose, much less in a state title game but if not for his efforts, the Bucks wouldn’t have even been in that position. A first year starter and following the considerable career of Dylan Smith, Van Pelt quickly established his own identity and began producing clutch saves and special moments.

Playing perhaps his best game of the season Friday, Van Pelt left no doubt he could hold his own at the position.

“It’s been three weeks of close games, close games and this was a close game, still 0-0 with 20 minutes to go and that’s the thing, Van Pelt kept us in it time and time again,” Szygiel said. “I can think back to the first round of districts at Downingtown West, he had a save and if he doesn’t make that save, we’re not even here.”

“It keeps you warm, keeps you in the game and makes sure you don’t check out,” Van Pelt said. “You could be standing around doing nothing for 20 minutes then a shot comes in and you’re checked out so facing that pressure helps with that.”

The senior was sidelined the entire tournament with an illness, getting cleared just in time to come back for states. A speedster and clinical finish most nights, Chaffee was a great complement to Houlihan and was just happy he ended his senior year as a contributor.

“It means so much, playing since I was a little kid and coming all the way to this day and winning states, which is possibly one of the last soccer games of my life, it’s an amazing feeling,” Chaffee said. “Sitting on the sideline during districts and supporting my team is an entirely different feeling than being out there. I dreamed about being here and winning states was just amazing to be a part of.”

Josh Jones is used to being labeled a “target.”

Often the tallest player on the field, the junior midfielder is the one teammates look for on set pieces. During the season, Jones had another target as he and his teammates carried their label as a top team then top seed in the postseason.

“It definitely motivates each and every one of us,” Jones said. “Knowing we didn’t go as far as we wanted in years past put a chip on our shoulders this year.”

Jones will have options for next year in playing for the Knights or an academy but doesn’t have to worry about that right now. All he was worried about Friday was getting back home with his teammates and celebrating what they had worked all season for.

“This is something I’ll remember the rest of my life, definitely,” Jones said. “Playing high school is a different experience than playing club or academy but it’s something I love to do and would love to be a part of.”

McCaffery: For Gallagher and Haverford, a season’s worth of lasting memories
Academy Park’s Brown turns tough game with Rustin into a keeper