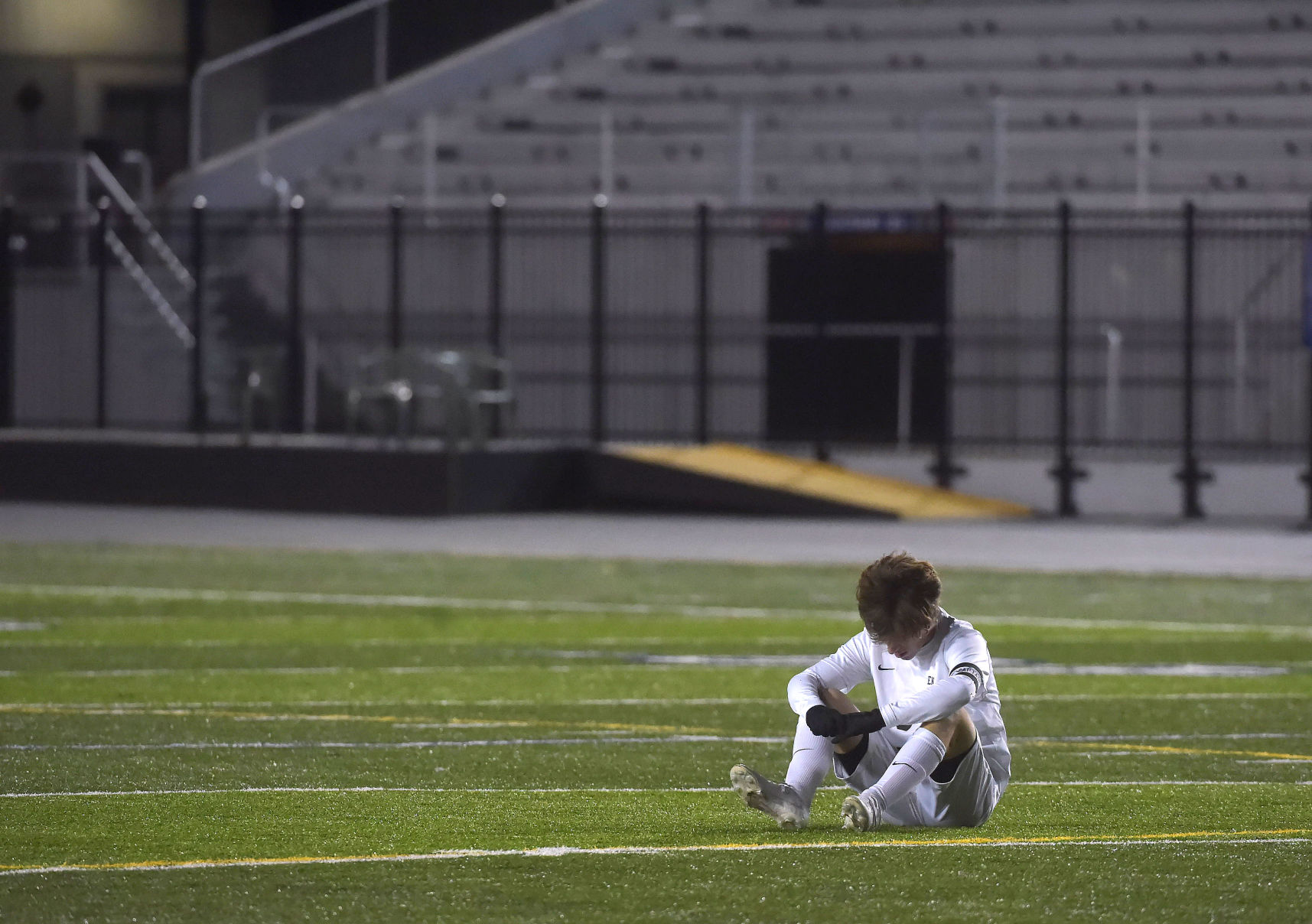 HERSHEY — Daniel Fombu’s name didn’t end up on the score sheet in the PIAA Class 3A final Saturday night. But of all the players on the field at Hersheypark Stadium, the Lower Dauphin striker was perhaps the most impactful.

The big variable in the state final is space: HersheyPark’s playing surface, unbounded by a quarter-mile running track like most high schools, is much wider. And that seemingly innocuous space far from goal can be a morass that lures defenders into all kinds of trouble and rewards attackers who know how to exploit it … attackers like Fombu.

Fombu drew the penalty that led to Lower Dauphin’s opening goal, and despite Strath Haven getting a goal back, the threat of Fombu opened space for his teammates to create Devin Roth’s game-winner in the 72nd minute, sending the Falcons to a 2-1 victory.

It’s the third state title in four years for the Falcons (22-3-1), though it’s the first of those finals to not be a blowout. Saturday’s finale also was different from last year’s trip to Hershey for Haven (16-8-1), which was routed, 4-0, by West Allegheny last November.

This time around, they did what they’ve done all postseason, not losing control when down a goal, then erasing the deficit via contributions from seemingly unlikely sources.

Strath Haven’s Jake Hooper, right, pops the ball past Lower Dauphin goalie Alex Grater for the tying goal in the second half of the PIAA 3A boys soccer championship game Saturday night at Hersheypark Stadium. The Falcons scored later in the half to pull out a 2-1 victory. (PETE BANNAN – MEDIANEWS GROUP)

This time, Jake Hooper did the honors in the 56th minute. Off a free kick taken by Emmet Young, Quinn Vandellos knocked a header into the path of Hooper, and the sophomore mid (then deputizing at right back) touched it into the back of the net for a 1-all score.

Both players had atonement on their minds. Vandellos, who scored in the Panthers’ District 1 final win, missed Tuesday’s state semifinal due to illness and was eager to contribute. For Hooper, it was because he’d hit the deck on a set piece moments earlier, whistled for the foul for apparently running headlong into the fists of goalkeeper Axel Grater.

“I was just pissed off because the goalie on the other play before that just punched me right in the back or the neck or whatever,” said Hooper, who scored a similar goal in the PIAA semifinal against Archbishop Wood. “And so I was thirsty for the ball. I just tried to read where it was going and I saw Andrew (Lowman) and Quinn, they both went up for it and I just prayed it would come to me. And it did. It just aligned perfectly.”

The goal leveled the score with 24 chaotic minutes to play, a just payoff for even play on both sides of a genuinely entertaining contest. With both teams evenly matched, quick at the back and sturdy in midfield, it was going to take a game-breaker. It turned out Fombu was it.

“My coach told me to always attack, because he wants me to be more selfish,” Fombu said. “I took that opportunity and saw since it’s a big field, I took it down the line and beat them.”

Fombu was at it in the 44th minute, beating Haven left back J.T. Holstein for speed down the left wing. When center back Luigi Malo slid to cover, he clipped the shifty Fombu in the box, and the referee pointed to the penalty spot.

Ethan Ramirez, who was largely held down in the first half, stepped to the spot and made no mistake, burying a kick high to Charlie Shankweiler’s left, though the goalie guessed correctly.

Strath Haven’s (8) Emmet Young heads a ball in front of Lower Dauphin’s (29) Daniel Fombu in the first half of the PIAA Xlass 3A championship game against Lower Dauphin Saturday night at Hersheypark Stadium. The Panthers came up on the short end of a 2-1 decision.

Haven struck back and had the better of possession, but couldn’t generate many clear-cut chances, even off set pieces. That’s when Lower Dauphin started knocking at the door. Roth headed just wide off a corner, then sweeper Josh Koteles ripped a shot high of the crossbar by just a yard.

It was building up to a combo play on the left wing for the Falcons, with Fombu drawing attention and springing left back Casey Ahern down the touchline. Ahern got past a defender and centered to forward Owen Shea, who flicked it on to the path of Roth to bury a shot with 8:16 showing on the clock.

“When I get the ball, I usually have our left back Casey in support,” Fombu said. “So when I played him, he was able to get past the other defenders and find Devin, and we were able to get the shot in.”

While Haven left Hershey with the second-choice trophy for the second straight year, this one felt much different. Young, who injured his leg in last year’s final and left the field in an ambulance that day, appreciates that more than most. But emergency healthcare aside, last year’s blowout by West Allegheny, coupled by injuries to three starters, left the Panthers dazed early and hardly feeling that they were in the game.

Saturday, Haven got its money’s worth. It dominated play for large stretches, forced three saves from Grater and several daring charges off his line to corral. It felt like a game where the margins were miniscule, and that was some consolation.

“We were in the game the whole time, and it was close and hard-fought,” Young said. “It might make it a little more upsetting, but it’s better than being blown out 4-0. We’re proud that we’re here, we’re proud that we played really well and it could’ve gone either way.”

“Last year, it felt like it was over before it started,” Vandellos said. “Didn’t feel like we had any chance at any point in that game. But this one, it was back and forth from the start. The score line definitely reflected that. It came down to the end and we just weren’t able to pull it out this time.”

Strath Haven believes it has one more surprise to give in PIAA soccer final
McCaffery: Even in defeat, prestige is back for Strath Haven soccer