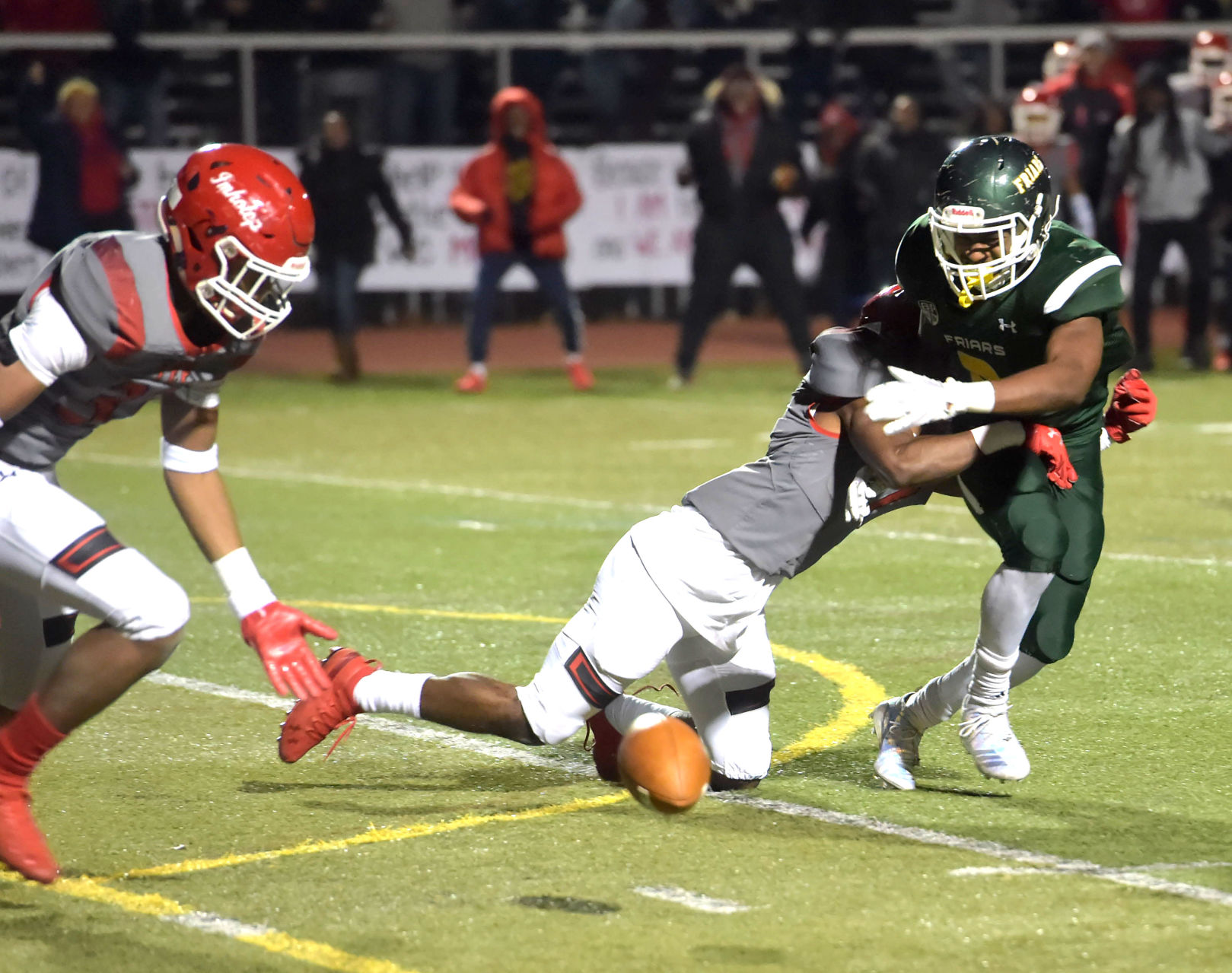 Bonner-Prendergast's Charles Ingram, right, is tackled after fumbling a snap on fourth-and-goal in the second quarter. Imhotep's Keon Wylie, left, would scoop the ball and return it 91 yards for a score, the pivotal moment in a 35-14 Imhotep win in the District 12 Class 4A final. (PETE BANNAN/MEDIANEWSGROUP)

PHILADELPHIA — Bonner-Prendergast might spend its offseason saying it was close to ending Imhotep Charter’s District 12 half-decade dynasty. How close? A few inches shy of the goal line. That’s how close.

There’s no telling how the remainder of the game would have transpired. But one play may have changed their fate.

A bobbled direct snap. A costly fumble. And a 91-yard return the opposite direction.

That series of events wrecked Bonner-Prendergast’s shot at springing an upset Friday night. Instead, Imhotep Charter bulled its way into the PIAA quarterfinals with a 35-14 win over the Friars at the Germantown Supersite.

Panthers quarterback Jalen Sutton accounted for three of the Panthers’ five touchdowns — a 45-yard pass to Dshaun Seals, a 41-yard run, and a 44-yard pass to Terrance Adams — en route to their fifth consecutive district crown.

Bonner-Prendergast’s Nasiim Rhodes Nelson pulls down a second half touchdown against Imhotep Charter. The Friars fell, 35-14, in the District 12 Class 4A final.

Despite Sutton’s big-play capability, it was Imhotep Charter sophomore Keon Wylie who turned the game.

Less than two minutes remained on the clock in the first half when Bonner-Prendergast (9-2) drove inside the Imhotep Charter five-yard line. The Friars, stuck at the one, called for a wing formation on two consecutive plays. They trusted that one of their power backs would muscle the ball over the goal line.

They didn’t. Instead, the Friars’ Charles Ingram mishandled a direct snap.

“I’m going to take the blame for that. I didn’t fully grab the ball,” Ingram said. “The play for me was to take it right up the middle. I’ll take the blame. We don’t run that exact play much, but we run that formation, and it works well. It didn’t go our way tonight.”

In an effort to recover it, the ball bounced from Ingram’s hands and into those of Wylie. He sprinted the opposite direction untouched for a 91-yard touchdown.

Rather than head into halftime with the score level, Bonner-Prendergast trailed, 14-0, at the break.

“Fourth-and-1 at the goal line? That’s huge. That’s the game, really,” said Imhotep Charter coach Nick Lincoln. “If they score there, I’m not saying they automatically win. But it’s a different game. We took a timeout there, coached up our guys, and I’m proud of how they responded.

“Keon has been dominating all year. He deserved that moment.”

Bonner-Prendergast couldn’t get nearly enough protection for quarterback Kyle Lazer. The Friars’ first drive of the third quarter went awry when Lazer endured tackles in the backfield on three straight snaps. Sutton and Imhotep Charter didn’t make it any easier for the Friars, either.

Uduma capped his Bonner-Prendergast career in a positive way. He had a second-quarter strip sack of Sutton, on which the fumble was recovered by Ingram, before the drive that unraveled at the goal line. Uduma, who is getting college looks from a number of FCS schools, also accounted for a one-yard touchdown.

“Things just got out of hand,” Uduma said. “If we would’ve scored before half, God knows what would’ve happened. It would’ve been a closer game.

“They made plays and we didn’t. That’s what it comes down to.”

Imhotep was plus-3 in the turnover battle. The Panthers’ defense also accounted for nine tackles for loss, including four quarterback sacks.

“They’re a sports school. They’ve got dudes from all over the place. They’re not your typical public school,” Muldoon said. “They’re amazing. We thought we’d have a shot by controlling the ball, controlling the clock, running the ball, moving it downfield. Once we got behind by 14, 20 points, it was tough.”

Bonner-Prendergast had one of its finest seasons in years, if not decades, Muldoon told his players. He lauded their ability to turn around what had been a doormat program in the Catholic League. He thanked the seniors for sticking out four trying seasons. And he told them to keep their heads up.