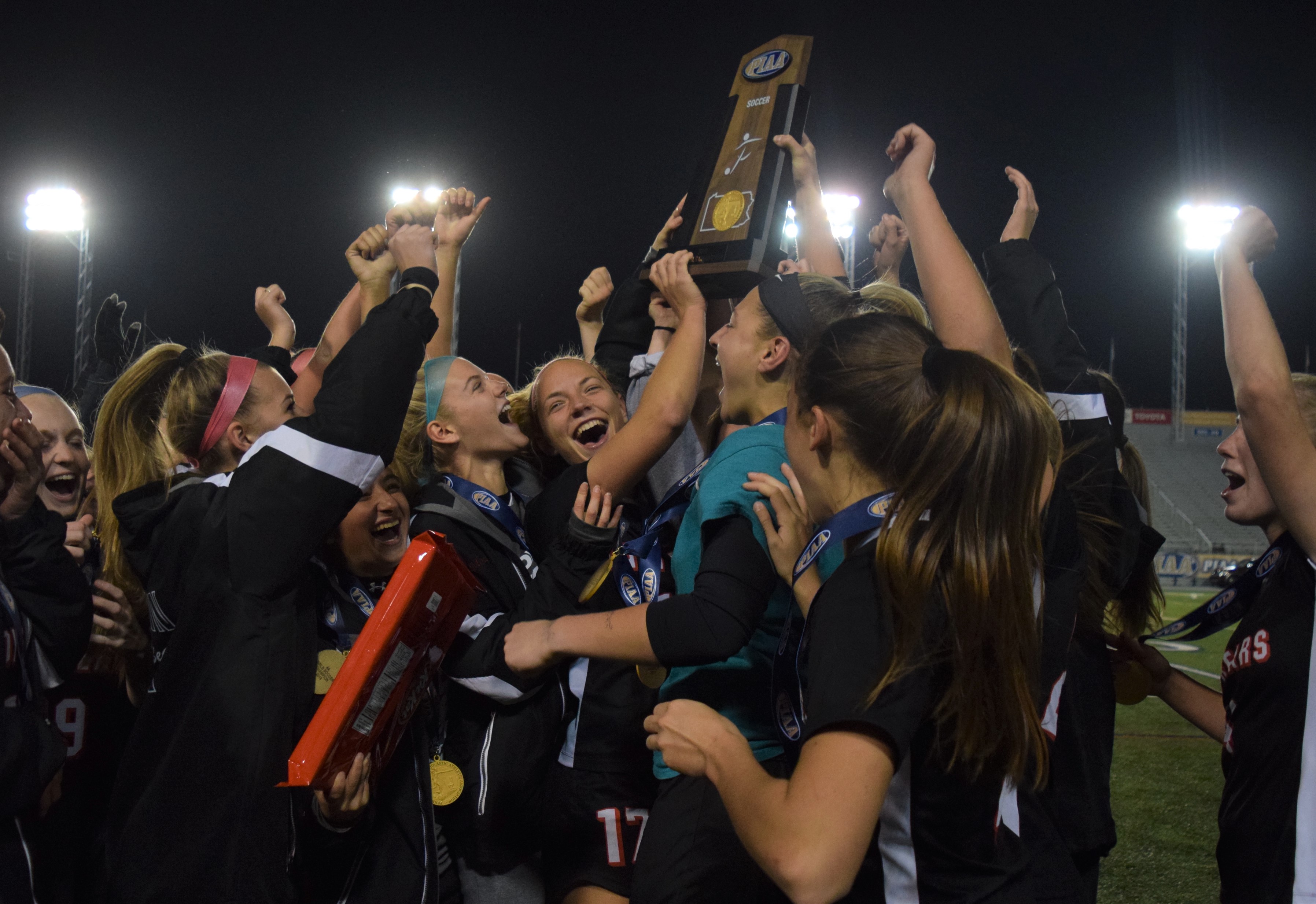 “In these games it comes down to goalkeeping, defending and restarts,” Goddard said. “I preached that over and over and over to these girls.”

With those three keys in their pocket, the Bears acquired something that can’t fit in a pocket: a PIAA championship trophy.

The Bears put on a resolute defensive performance headlined by senior goalkeeper Mattie Gallagher and junior defender Mikayla Moyer’s free kick from the corner of penalty area dropped into the far post top corner with 6:34 left in double overtime to lift Boyertown to a 1-0 victory over Conestoga in the PIAA Class 4A championship game Friday evening at HersheyPark Stadium.

“No words can describe how happy I am right now,” Moyer said. “I was trying to get it in the area so someone could score. And … it ended up dipping in. It ended up diving and I just thought, ‘thank you!’”

Boyertown (26-2) and its supporters had reason to say thank you to Moyer, fellow defenders Morgan Kline, Courtney Actis and Emma Elwell, and especially Gallagher, whose 10-save shutout performance was Player of the Match quality while combating a quality Conestoga side led by seniors Caitlin Donovan, McKenzie Coleman and defender Calista Courtney.

While Boyertown’s run to the Pioneer Athletic Conference title saw it become a high-scoring powerhouse, the District 1 runner-up Bears’ run to a state championship was built on Boyertown’s typical identity and Goddard’s three keys.

“I can’t say enough about these kids, their character, the way they’ve represented themselves, the program, their community and their school,” Goddard said. “A wonderful opportunity for our school and another state championship for our high school.”

The Pioneers (21-4) lost only four matches this season, but the last two were to the Bears. Boyertown won their District 1 quarterfinal on Oct. 29 in penalty kicks 3-2 after playing to a scoreless draw.

For all their excellence, brushing off past early exits in states and reaching the final after dispatching District 1 champion Pennridge in the semifinals, the Pioneers couldn’t solve the Bears.

“It’s sad, there’s a lot of emotions,” Coleman said. “I really thought we could do it. For it to be taken away in double overtime was kind of shocking.

“I think we do feel good about our play. We dominated a lot, but they’re a great team. For them to capitalize on that last one, that’s just quality. We weren’t able to do that so kudos to them.”

There was preseason buzz locally about the Bears, with their returning cast bolstered by the addition of German exchange student Camilla Kuever, a member of Germany’s U16 national team. But no one knew it could end in Hershey raising a trophy.

“We knew from the beginning that we had skill and could go far, but nobody knows how much it takes to get here,” Moyer said. “But we figured it out, as a family and working together as a team.”

The game built to a crescendo from the start, a slow first half making way to a increasingly threatening Pioneers squad in the second half before becoming a back and forth battle in overtime. The best chance in the first half was Megan Daly’s shot from 30 yards that forced Gallagher into a tip save that went off the crossbar and she recovered in time before Donovan could score the rebound.

Conestoga showed its quality and dominance in the second half that forced Gallagher into an incredible tip save on a lofted left-footed shot from Coleman before the Conestoga striker later hit the crossbar with seven minutes in regulation.

With striker Samantha Goffice playing but visibly hobbled by a sprained ankle, the Bears lacked threat in the run of play. The Bears’ main offensive outlet was freshman Samantha Devlin down the right side, attempting to earn her team corner kicks with the hope of earning set piece opportunities.

Kristi DiRico was a threat down the left side for Conestoga, with Coleman and Donovan also being complemented by Elli Mayock in the attack.

When regulation ended, Boyertown looked fortunate to still be level. But similar to their marquee quarterfinal win over North Allegheny, the Bears came back to life in overtime.

Boyertown was fortunate when Elwell forced Coleman off the ball in the penalty area 12 minutes into the first overtime, a possible penalty on a different day. Conversely, it was the type of physical, relentless defense by the Bears and Elwell, who converted from forward to outside back for her senior year and was a standout Friday, that allowed them to keep Conestoga off the board.

Four minutes into the second overtime, Moyer made a stunning last ditch tackle on a DiRico break that had the look of the winning moment.

Then, with set pieces as their biggest weapon – Kuever’s late header from a corner kick in the semifinals earned the Bears the trip to Hershey – Moyer made her moment on the other end count most. A defender came through the back of Kuever on a throw in at the right corner of the 18 to earn a free kick. Moyer soared her delivery from a tight angle into the far post side-netting to make Boyertown champions.

“Conestoga is one of the toughest teams and they worked really hard,” Gallagher said. “Mikayla Moyer, wow. She goes out and practices with her dad (Todd Moyer) before games sometimes and it paid off.

“I’ve dreamt of this moment and to do it with my best friends who I won’t get to play again with, it’s a real moment everyone dreams of.”

It wasn’t the ending Conestoga dreamed of, but its senior group of Donovan, Courtney, Coleman, Jane Castleman, Elisa Ponte, Ellena Hocevar, Alexandra Aufiero, Madelyn Hottenstein, Julia Littlewood, and reserve goalkeepers Sarah Nselel and Maeve Regan, can take heart in leading an experience the program can hope to build upon.

“There’s a lot of good things to be taken away, coming all the way here,” Coleman said. “It was as good experience for everyone and a good run for the seniors to make it all the way, getting to come here and show what we’re all about.”

Boyertown’s Class of 2020 group – Gallagher, Elwell, Kline, Madison Monka, reserves Lauren Moccia, Aimee Toscano and injured defender Raeanne King – and the rest of the Bears could only have wished for such success. Now, it’s their legacy.

“This is a dream come true for a senior,” Elwell said. “We’ve worked so hard for it. This was our plan since Day 1. No one thought it would be a reality then, but once we got closer, we realized, this could be our reality, this could be our legacy.”