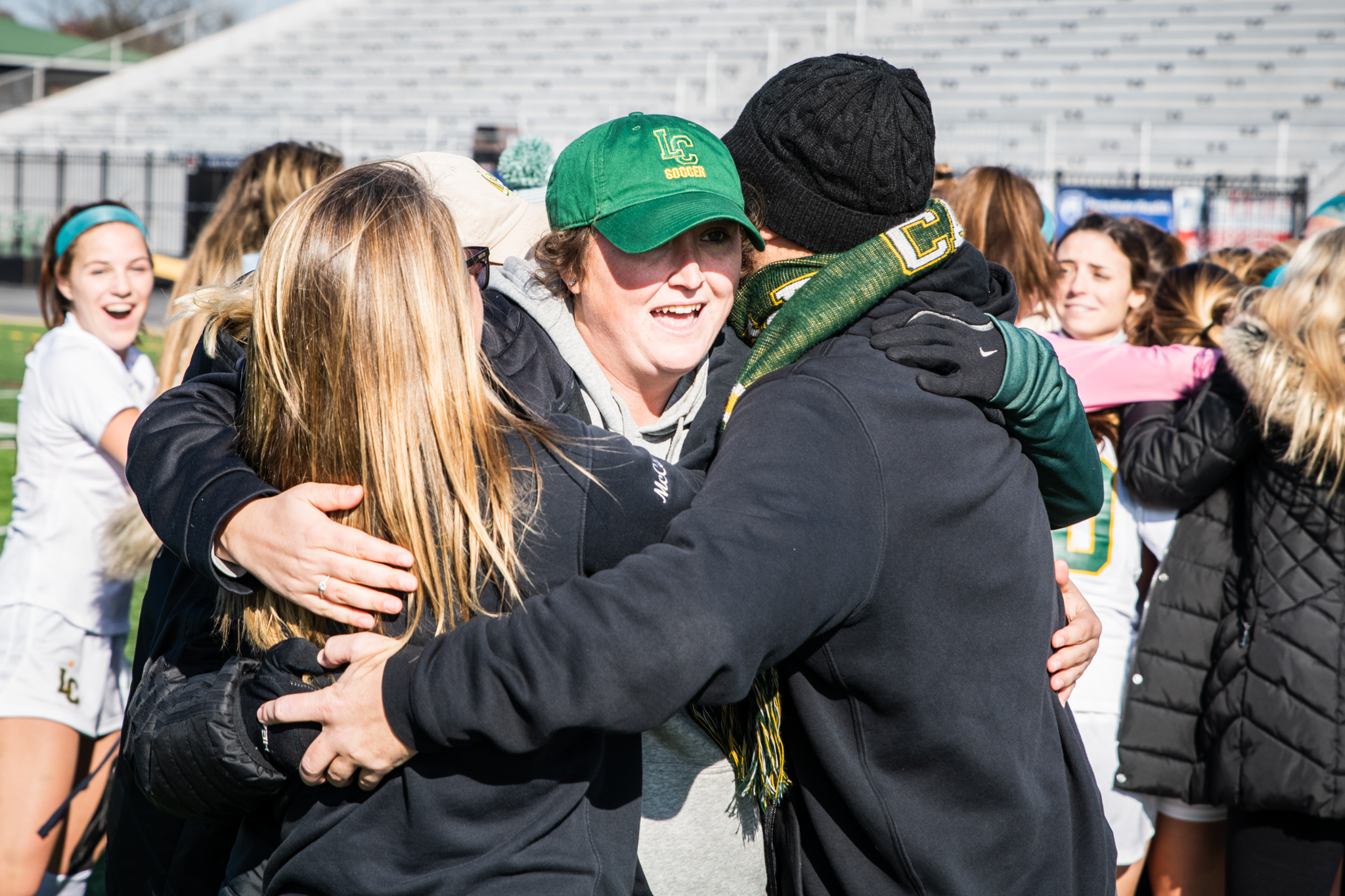 HERSHEY >> Bree Benedict is no stranger to having her team’s defense hold out against all odds to protect a one-goal lead.

The only difference now is she’s not the goalkeeper, she’s the coach and it’s a whole lot more stressful. Benedict, the second-year Lansdale Catholic girls soccer coach, was able to live with the stress Friday because of the outcome.

Her defense did what it had to, outlasting District 10’s Villa Maria 1-0 to win the program’s first state title at HersehyPark Stadium.

“I’ll be honest, I grew up at CB West where you got a lead and defended it with your life and as coach, I hate it,” Benedict said. “I’m just nervous the entire time but that’s just how we play. We know if we can get a goal, we can rely on our defense.

“It’s those games we play against Pennridge and Souderton where we spend time defending and they come in handy in these situations.”

Defense isn’t always artistic and LC’s effort certainly won’t many aesthetic contests but that wasn’t the point. At the same time, the Crusaders also needed to break the Victors’ pressure at some point.

Enter freshman Megan Steinbach. Tiny but technical, the attacker was able to dribble past a defender and finally get the ball across midfield with about five minutes to go and LC would close the game out from there.

“One of my assistants goes ‘it’s time to pull another rabbit out of the hat,’ and I said tell me what the rabbit is,” Benedict said. “They said ‘put Little Meg in and she’ll dribble to the corner.’ I figured let’s try it and she was exactly what we needed at that moment. It gave Kellie (Gillen) a little more energy to do it and we kept the ball in the corner the last three minutes of the game.”

Steinbach, Ava Mercier and Casey Sabolsky were all among the freshmen who rose to the occasion for LC on Friday.

“It’s exciting for me as a coach to see those younger players have learned and weren’t afraid to be themselves,” Benedict said.

Every time Gillen felt tired or drained after trying to make another run through three or four defenders, she knew where to look.

“Looking up and seeing pretty much your whole class, there’s nothing like it,” Gillen said. “Every time your foot is on the ball, you hear your named getting screamed, it’s so much motivation. Bree told us everything we felt like we had nothing else to give, look at the crowd and give a little more for them.”

LC brought the house in a sense, with most of the student body, plenty of teachers and administrators cramming the stands behind the Crusaders bench to urge on their classmates’ pursuit of history.

“You look over and know ‘this is why I’m playing,’” Boccella said. “It made me want to play harder.”

The players had an idea they were going to get support Friday, with teachers telling them in school during the week they were ready to call out themselves and drive up and most of the senior class just planning to not come in and make the trip. That didn’t need to happen, as the school rallied behind the team and filled the stands in Hershey.

It went beyond that as well, players getting social media videos of seven fan buses being loaded back home and last year’s seniors and other alumni putting together a video backing the team on its quest.

“Bree told us before the game, ‘when you’re dead, look up,’” Connelly said. “She told us they were here for a reason and we could do it and a lot of people believed in us.”

Aside from the trophy and medals, LC athletic director Mark Princehorn made sure to grab a match ball to bring home with the memories of the day.

“Soccer’s been such a good memory for us, not just the past four years but since we were little and to end it on such a good note just completes everything,” Connelly said.

“It made senior year like 10 times better,” Boccella said.

It was a run born of simple beginnings, just a team that enjoyed each other enough to want to make it last as long as possible. Along the way, Gillen said they decided they might as well win a state title to go with it and for a group that already made so much history, it added a final chapter.

“They’re obsessed with making history and as silly as that sounds, they just want to be remembered and be able to remember their time together,” Benedict said “Now they have a trophy they can point to and remember all the good times they had.”