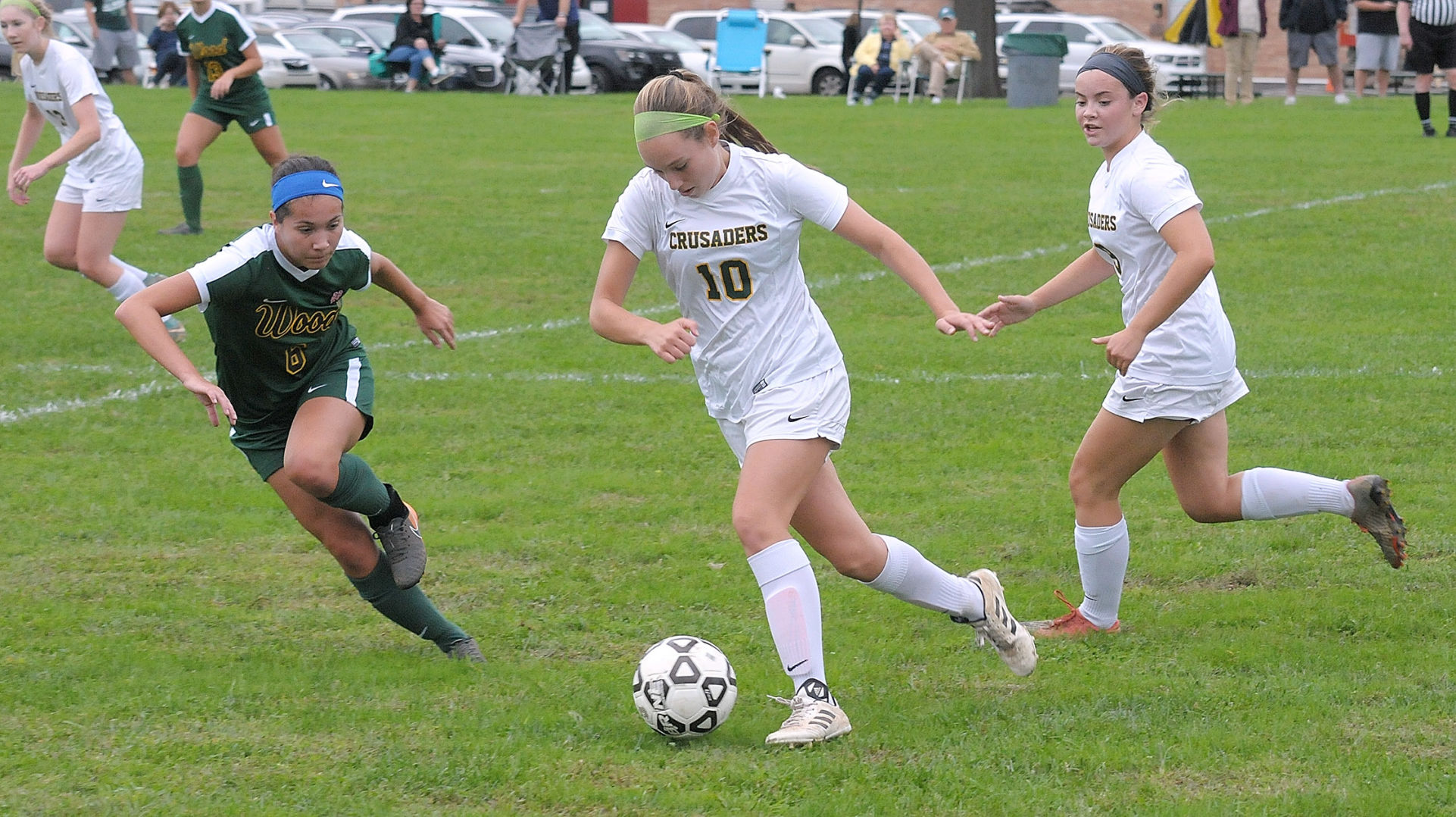 If there’s a prototype for what a state finalist soccer team looks like, the Lansdale Catholic girls soccer team is happily not it.

Senior Kellie Gillen couldn’t help but crack a smile as she was describing the almost mechanical way their PIAA 2A semifinal opponent Lake-Lehman was going through warm-ups without a word while she and her teammates were blasting music, dancing and doing very little productive in terms of soccer. There was no grand, sweeping goal of winning everything this year, just a team that wanted some more time together and to go farther than ever before.

The Crusaders checked both those boxes as they prepare for the program’s first state championship game against District 10’s Villa Maria at 11 a.m. Friday morning.

“I think we’ve had the most passion out of any of the other teams we’ve played,” Gillen said. “Playing other teams, you could feel they might be better on the ball, passing or combining but our hearts are just so into it.”

The team’s seven seniors all agreed Wednesday it was still a little surreal that they’re actually playing on the last day of the season. Friday’s final will more than likely be the last time any of them play soccer in a competitive setting but it was never a strong passion for the game that spurred their playoff push anyway.

Last year, they helped LC win its first-ever PCL title and advanced to the second round of states where they lost a one-sided game to Lewisburg. This fall’s group did come in wanting to repeat as PCL champions, but that sapped some of the enjoyment out of it and after falling to Archbishop Wood in the league semifinals, their focus changed.

“I’m glad we’ve gone the longest we possibly could with this group of girls because we’re just so close,” senior Brynn Maxwell said. “I think a lot of other teams would have said they were sick of the season and wanted to be done but we don’t ever want it to end.”

It’s certainly been a wild state playoff run for LC. The Crusaders rallied from a 2-0 deficit to top St. Basil in a shootout in the first round, then found a winner from Gillen to beat ELCO and finally get past the second round.

Against Lake-Lehman, the District 2 champion that brought a prolific offense into the match, LC again just found a way to keep the season alive.

“At the beginning of the season, we chose things we wanted our team to follow and one of the words was ‘resilience,’” senior defender Danielle Mehlmann said. “We never give up, we’re always fighting, we fight for each other and if we’re down 2-0, it just makes us more resilient that we’re going to come back.”

“Always being the underdogs helps too,” defender Julia Boccella said. “We’re not supposed to win these games. I think everyone underestimates us.”

LC coach Bree Benedict was considering driving the five-plus hours to watch Villa Maria take on North Catholic on Wednesday, but reconsidered. Her players had already accomplished what they wanted and there really wasn’t anything a scouting trip would do to change that.

Instead, the Crusaders had a lively and spirited recovery session Wednesday while continuing to enjoy the moment.

“We played every game in playoffs just to get another game with each other,” Mehlmann said. “We weren’t playing to get a trophy, we just wanted to be together longer.”

“Bree and (assistant coach) Janeen (McCarty) are always reminding us this is our senior year and there’s no other game guaranteed,” midfielder Taylor Connelly said. “They’re always saying there’s 40 minutes left, there’s 10 minutes left, they’re pushing us to sell out until it’s over.”

Gillen said at the start of the year, the players never set specific goals like winning a certain game or scoring X number of goals. Instead, they kept everything limited to team goals like repeating in the PCL or going further in the state tournament.

“It’s brought us seven closer together, we’re all best friends,” Maxwell said. “We text each other before every game ‘I’m not ready for it to end,’ even though we’re still going to see each other in the hallways the next day. It’s still hard for us to cope with it so we had to keep going.”

Connelly joked she doesn’t think of herself as a senior while Gillen added that there really isn’t a class divide within the team. The seniors have “adopted” junior Delaney Molettiere as the honorary eighth senior and there’s a feeling of including everyone regardless what year they are in school.

While the Crusaders would love to win Friday morning, they’re going into the state final with the same mindset they’ve had the past few weeks. Boccella said they expect Villa Maria to be good and to come at them strong but all they’re worried about is enjoying the day.

“Now it’s just about playing the last game of soccer we’ll ever play and doing it with our best friends,” senior Lauren Delpo said. “I think all any of us want is just to have fun.”

“Taylor sent us a text ‘this what I’m going to be talking about when I’m old and wrinkly,’” Gillen said while Connelly buried her face in her hands. “I think the program has changed so much from freshman to senior year, with new coaches, the way we play, all of it and I think we’re part of something really special.”

The team’s also gotten plenty of support behind them. Delpo said students that she’s never talked to and teachers she doesn’t have are congratulation her and the other players at every turn. They’ve had more than 10 teachers tell them they aren’t coming in Friday to go to the game and LC is planning to run several buses of students up to Hershey.

“Right before the second half of our last game, Bree just told us to have fun and that’s really the most important thing,” senior Sandra Hernandez said. “We really do love it and it’s the best part of our day. If you had a bad day, going to soccer just makes it so fun, everyone here is so happy and we’re just like sisters.”

Aside from their bond in each other, the seniors agreed their faith has helped bring them together. The team has prayed together on the bus ride home after each playoff win and Boccella said she made a small sign of the cross before Connelly’s game-winning corner kick against Lake Lehman.

“We have a team saying that God put us in this position because we can handle it,” Gillen said. “I think we’re all just really blessed.”

Regardless of outcome on Friday, LC’s done what had never been done before and this senior class has left a legacy none of them will ever forget.