One chance separates Conestoga and Pennridge in PIAA-4A semifinals 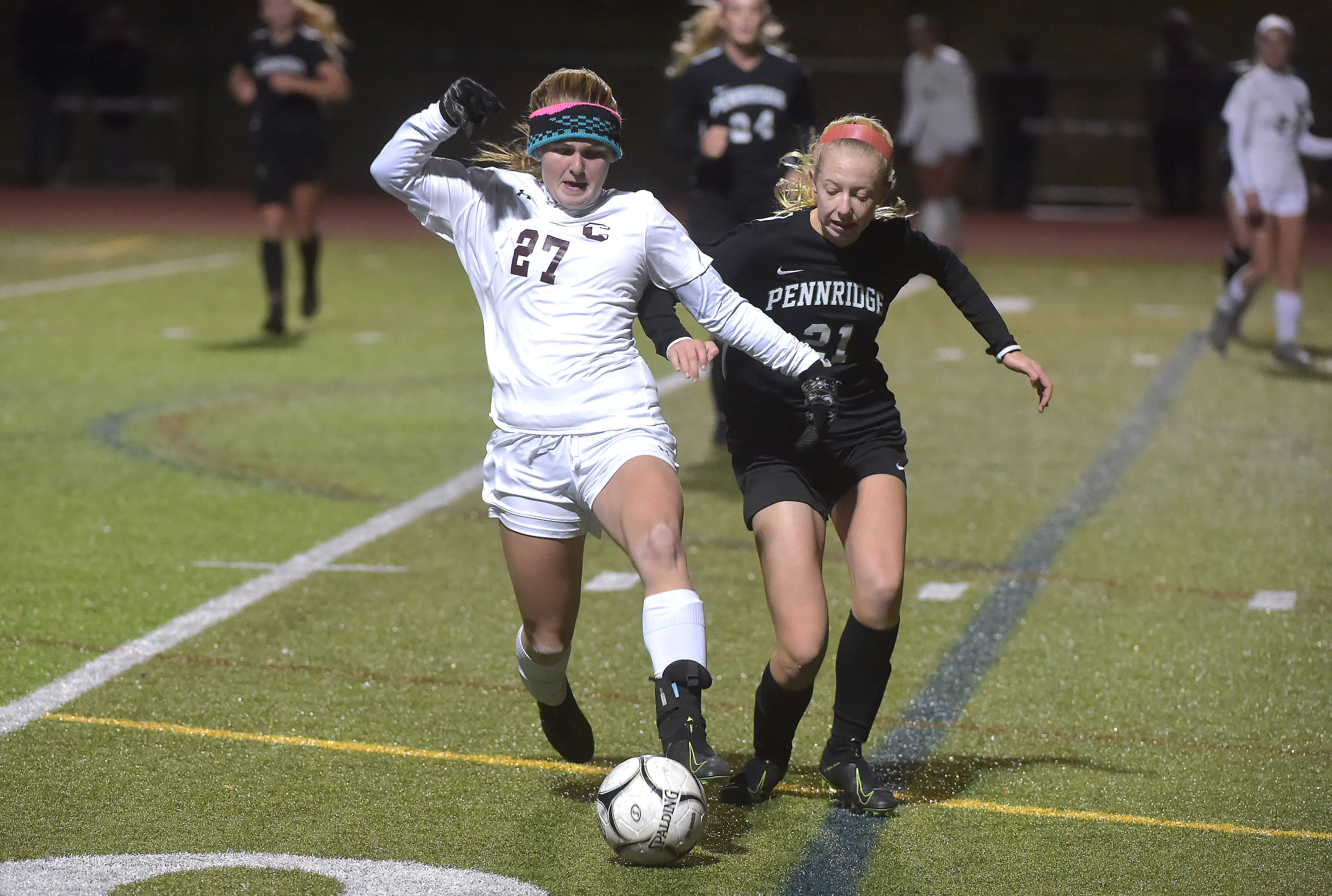 Conestoga's (27) Elli Mayock controls the ball in the second half ahead of Pennridge's (21) Zoe Sabol during their PIAA-4A semifinal on Tuesday, Nov. 12, 2019. (Pete Bannan/MediaNews Group)

WORCESTER >> The hesitation before Chance Hendricks’ answer said a lot.

The Pennridge senior knew she and her teammates had put together a tremendous season, but they had also fallen two wins shy of their ultimate goal. While the truth was there, Hendricks’ competitive instincts were still locked on the previous 80 minutes and the one opportunity that had decided the match.

Pennridge saw its season end Tuesday in a 1-0 loss to Conestoga in the PIAA 4A girls soccer semifinals at Methacton, denying the Rams a second straight trip to the state title game.

“It was a rough game, it was really back and forth and they’re definitely the best team we’ve played so far,” Hendricks said. “They posed a serious challenge, we had one little breakdown and they capitalized on their opportunity. It was something we couldn’t do.”

As two of the best teams not only in District 1 but the entire state, a meeting between the Rams and Pioneers seemed destined at some point. It made sense it came in, to date, the most important match of the season for both sides.

With an abundance of talented players on both sides of the field and the stakes at their highest, it also had the feel of a match that would come down to a single chance. In the first half, it was Pennridge with the edge, an early shot by Leah Malone the first of several chances that would go unfinished.

“I thought we came out really strong and could have finished a couple opportunities in the very beginning but just didn’t,” senior defender and co-captain Lauren McIntyre said. “That obviously turns into a really big factor.”

McIntyre, heading to Bloomsburg next year, was terrific defensively for the District I champion Rams and helped keep Conestoga standout Caitlin Donovan in check for most of the night. While the Pennridge defense was good, so was Conestoga’s.

The Pioneers, led by excellent center back Calista Courtney and Reese Henderson, were able to throw the Rams off their usual controlled passing. Conestoga got numbers behind the ball fast and Pennridge kicked away a lot of chances to connect and possess the ball.

“I felt like we didn’t stick to our usual style of play, we like to connect passes and their backs were really compact so we couldn’t get passes through them,” Hendricks said. “Maddie (Anderson) and I usually play the ball through and it didn’t really work. Later on we found our diagonal balls would get in but by then, it was a little too late.”

With so much attention going toward Donovan, Pioneers forward McKenzie Coleman created most of her team’s best chances in the early going. Conestoga started to seize control in the second half, with sub Elli Mayock helping spark her side.

Donovan only got one chance all game, but she made the most of it. The ball found her in a gap between the backline and midfield, allowing the senior to use her space, get the ball to her right foot and launch a shot from the edge of the box that senior keeper Meghan Kriney made a valiant effort to stop but found its way inside the post.

“If we let her get the ball, she was dangerous every single time so we tried to shut her down,” McIntyre said. “She’s a really strong player, holds onto the ball really well and dribbles fast with it so you can’t give her any space up top.”

Donovan’s strike came with 8:36 left and despite a furious charge by Pennridge, the Pioneers defense was able to hold the line and see out the result.

After losing in Hershey last year, the entire team but especially the five seniors made it their endgame to get back. It drove everything Pennridge did this season, leading them to a 22-2-1 record, a fourth straight SOL Continental title and the program’s first District I title since 2011.

It still didn’t alleviate the sting of Tuesday’s outcome.

“It was still one heck of a season and we’ll always remember going to Hershey last year,” Hendricks said after a slight pause. “That’s a good high school memory that we’ll always take with us but our ultimate goal was to get back to Hershey so I can’t say we accomplished everything we wanted.”

McIntyre added she was very proud of all the first-year starters and varsity players who filled out the lineup this season and helped carry the Rams to the final four.

Pennridge coach Audrey Anderson understands the result will probably hurt the team’s five seniors – Maddie Anderson, Hendricks, McIntyre, Kriney and Rachel Dudek – for a while just due to their competitive nature and all the effort they put in to trying to make consecutive state finals. At the same time, she felt the team’s success this year was largely due to their drive picking up the underclassmen.

“I don’t know that anyone would have honestly expected us to be here this season,” Anderson said. “As their coach, I’m proud of what this senior class was able to do. It’s heartbreaking and something you never to want do as a coach, you’re not prepared for the season to end but I know they’ll bounce back.”

Replacing the seniors, especially the midfield engine of Hendricks and Maddie Anderson, will be difficult but Pennridge has a lot of quality players coming back like juniors Maddie Angelo and Lindsey DeHaven and sophomores Leah Malone and Emily Kriney.

Tuesday was a bit too early to think about that, and their coach wasn’t too surprised the seniors and underclassmen were still trying to process that it had come to an end.

“That’s the nature of the beast, when you’re a competitor you never want to lose and you can’t always see what you accomplished,” Anderson said. “I think they’ll sit back and see what they were able to do, only giving up 10 goals in 25 games is huge, this was the best record the program has had in a long time.”