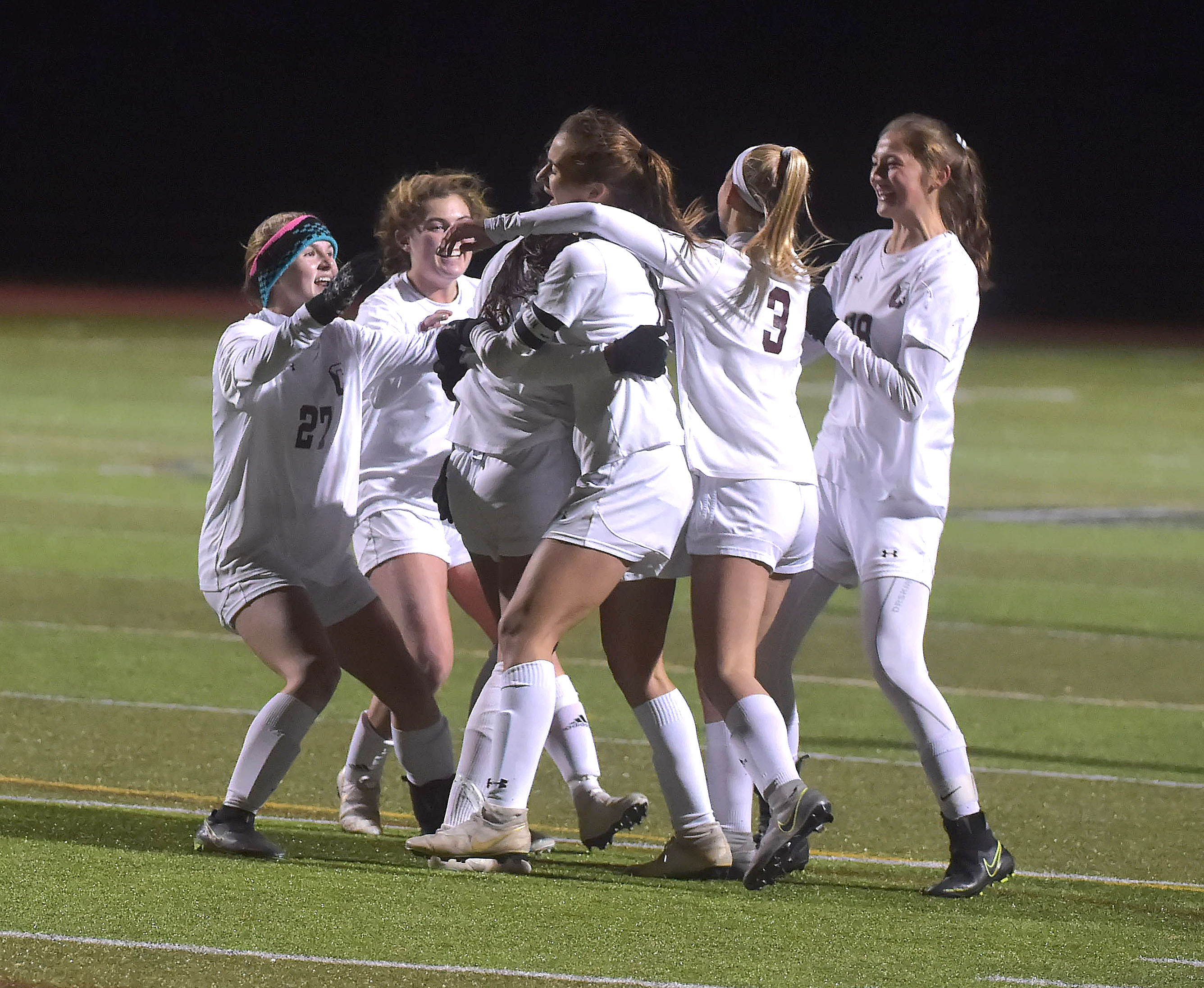 FAIRVIEW VILLAGE >> The Conestoga girls have played for the state soccer title before. In fact, the Pioneers won it all back in 2006 and again in 2008.

And even though ’Stoga has always been a consistent league and district power, success in the PIAA Playoffs has been elusive over the last decade, especially under current head coach Benjamin Wilson. That all changed big-time this fall, and on Friday the Pioneers earned their way into the state championship game, to be held Friday at Hersheypark Stadium.

“I am so excited, especially to be going to the finals with this team,” said senior co-captain Calista Courtney.

“This is all I’ve ever wanted for my high school career,” added fellow senior co-captain Caitlin Donovan.

Donovan scored the lone goal in the final 10 minutes of regulation to top reigning District 1 champion Pennridge, 1-0, in the state semifinals on a windy and frigid Tuesday evening at Methacton.

“This is my fourth year and our third time in states,” said head coach Benjamin Wilson. “And we hadn’t got past the first round until this year.

“For the girls it’s fun. For me it’s just a big relief. Last season we beat Pennridge and Souderton in the districts and then those two went on to play for the state title.

“We were bound to get here at some point and it’s great to see it all come together.”

Now 21-3 overall, ’Stoga will battle Boyertown for the crown. The two met during the regular season and the Bears prevailed in penalty kicks. Pennridge’s season ends with a 22-2-1 mark.

“Pennridge was by far the best team we’ve played this season,” Wilson said.

The No. 3 seed from District 1, the Pioneers have blossomed in PIAA Tournament action, beating the District 12, 7 and now 1 champions by a combined 10-0. It was Conestoga’s 12th shutout of the season.

“At the beginning of the season, we had basically a brand new back line and a lot of very good returning attacking players,” Wilson explained. “I thought unlike other seasons we would be an all-out offensive team, but as we got into the playoffs our back line really came alive. And in the last few games, we’ve given up nothing.”

In the 81st minute of a scoreless and very physical battle, the Pioneers finally got a prime scoring chance, and Donovan made it count. A shot by teammate McKenzie Coleman was blocked by a defender, but it bounced her way. She corralled it, dribbled right and unleashed a blast that Rams’ keeper Meghan Kriney got a piece of, but not enough to keep it from spinning into the net.

“I’ve scored a couple goals in the playoffs but I think that was the most important one,” Donovan said.

“It was a ricochet, and Caitlin is always moving and she is able to explode into spaces so quickly,” Wilson added. “She gets that momentum going forward and then just carries it through on the ball. We’ve seen goals like that all the time from her.”

For the final 8:36, ’Stoga held on. Or as Wilson termed it: “we managed the game from there.

“I said to the girls at halftime that we had to give up the all-out attack like we normally do. We needed to know when to defend as a team and just kind of choose our moments.

“We saw that getting the ball to Caitlin (Donovan) and McKenzie (Coleman) on top was working really well. We thought if we got the ball to them four or five times, eventually one of those chances was going to work, and sure enough it did.”

“Limiting the corner kicks in the postseason is important because those are where you give up goals,” Wilson said. “In previous seasons that’s how we were knocked out of states. It’s been a number on priority for us.”

Even though the Rams had the wind advantage, each side had four shots on goal in the first half. But the only really good scoring chance came when Pennridge’s Leah Malone launched a sailing shot from distance that bounced off the near post.

“I don’t think the wind or the cold played a factor,” Wilson said. “It certainly wasn’t as big of a factor as we thought it would be. The girls were so pumped and the game was so competitive there was just wasn’t any time to think about that type of thing.”

For the 11 seniors on the ’Stoga roster, there is one more game with the state title riding in the balance. And unlike each of the previous three seasons, nobody will be lamenting a quick exit in the state tournament.

“We’ve struggled to get over the hurdle in past seasons and once we won our first game in states (7-0 over Cardinal O’Hara) we kind of knew this was our year,” Donovan said.

“It seemed like every season we’d be at the team banquet looking back thinking we should have gone further in states,” Courtney agreed.