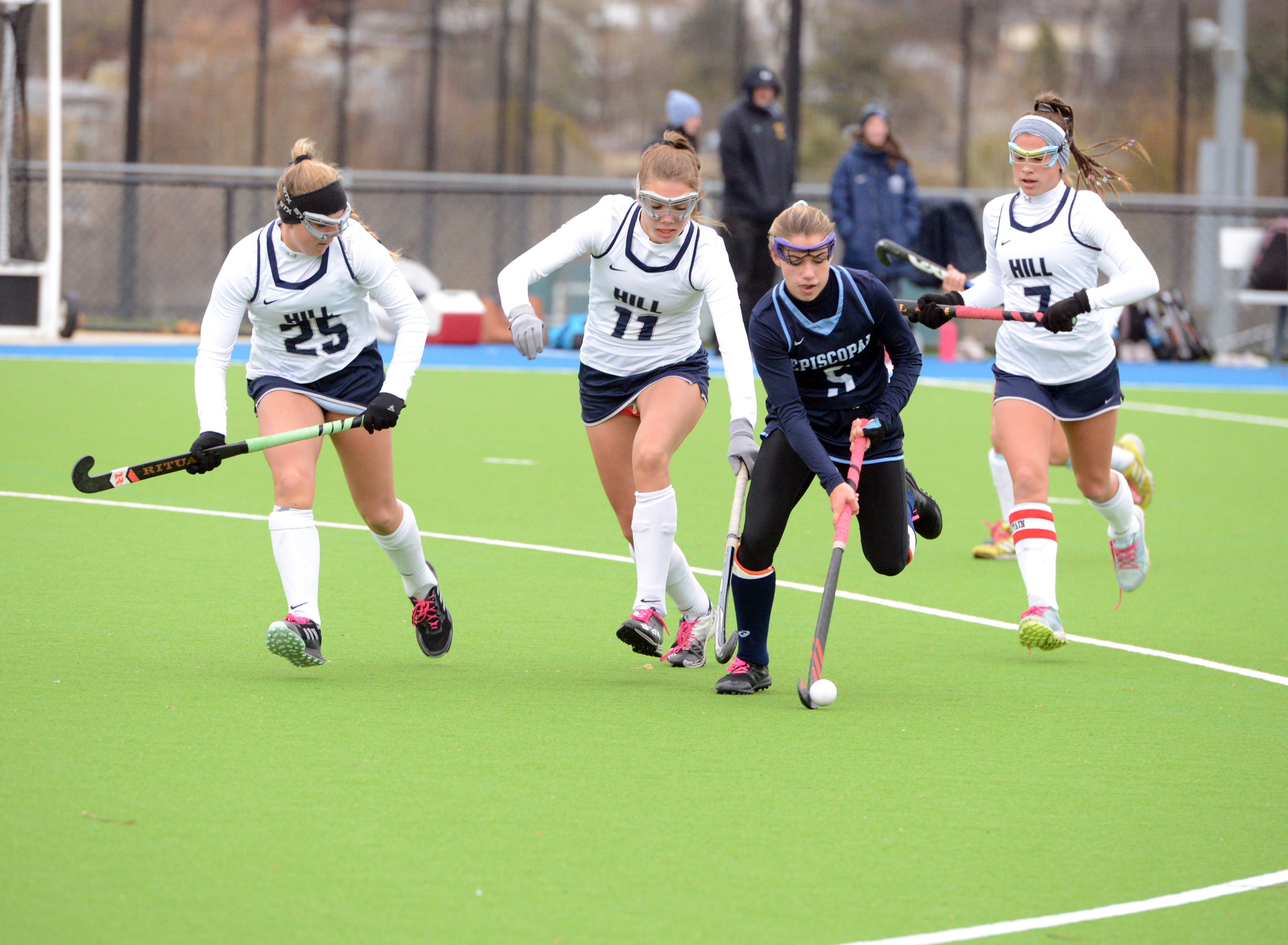 PLYMOUTH >> The Hill School field hockey team has tested itself against nationally ranked competition throughout the 2019 season.

Those types of contests were put together in order to prepare the Rams for Tuesday, as they faced reigning champion Episcopal Academy in the Pennsylvania Independent Schools Athletic Association championship game at The Proving Grounds.

Both ranked among the Top 12 teams in the country by Max Field Hockey, the two squads did not disappoint, putting on an entertaining championship bout.

Episcopal Academy erased two first-half deficits before striking for two goals early in the second half on the way to a 4-3 win over Hill School in coach Gina Buggy’s final game for their second straight PAISAA title.

“We were fully prepared for this game. It was a great game,” Hill School coach Jennifer Weissbach said. “We knew it was going to be a high-level game. Absolutely no regrets.”

While the EA program was making its fifth title game appearance since 2014, including championship wins in 2014, 2015 and 2018, Hill was getting its first championship experience.

Hill senior Alex Conway got the Rams on the board first, deflecting a shot by Logan Clouser into the net less than 10 minutes into the game. After EA sophomore Ashley Sessa, a Schwenksville native who played at Spring-Ford last season, tied the game two and a half minutes later, Josephine Palde once again gave Hill the lead, 2-1, with 9:12 to go in the first.

“It always sucks to not score first because normally when teams score first it gives them a head start,” Sessa said. “And then the other team starts to feel sorry for themselves and feel like, ‘Oh this game isn’t ours.’ But that is not our team.

“Our team is very strong, and that motivates us as a team to pick up the pace, get more energetic on the sideline, on the field. Get more aggressive, but not dirty. That’s just how EA is.”

Sessa responded to Palde’s score with a goal less than a minute later to tie the game 2-2 at halftime. It seemed to swing momentum EA’s way as the Churchwomen scored two early goals to start the second half.

Jackie Miller scored her first goal, assisted by Sessa, 75 seconds into the half and then put EA up 4-2 with another score, this time off an assist from Laura Null, with 23:02 left in the game.

“We were just pumped up to play,” Sessa said of the quick start in the second half. “We knew they were going to come out strong because it was tied. We wanted to come out even stronger.”

Palde found Kennedy Cliggett to pull the Rams within one, 4-3, with just more than 11 minutes to play. Hill had two more corner attempts shortly after, but EA goalie Gianna Cilluffo, who saved four shots Tuesday, and the Churchwomen defense kept away the equalizer.

Hill earned 10 corners, compared to eight for EA, and put 17 shots on goal in the game. Goalie Hayley Gable made six saves, including a big one down the stretch, to help give the Rams a chance to tie things until the end.

“It was two quick goals,” Weissbach said. “A few defensive let downs was ultimately the decider in the game, but I think we played hard, played well, controlled possession. I think we out-cornered them. Overall it was a great game.”

Josephine Palde puts Hill back up 2-1 with a little more than nine min to go in first. pic.twitter.com/o9YrG8ofDT

Hill, which has reached the PAISAA semifinals three times in the last four seasons, will be well-equipped to get back to the title game next season with just three seniors departing in Conway, Ashley Kling and Riley Bauer.

“We’re going to keep working hard and get better from this,” Weissbach said. “We’ll have a strong team next year, and we’ll look to build off the success of our season. We’ve had a great season, and I’m very proud of the girls for all the hard work we put in this year.”

Sessa spent her freshman season at Spring-Ford, where she earned first team all-area honors before transferring to Episcopal Academy before this school year.

While she’s had to sacrifice some time with friends and other leisure activities to make the 45-minute commute to and from the school, she’s happy how she ended up: with a PAISAA title to cap her sophomore season.

“I love Spring-Ford, been there my whole life, but transferring over here, it’s such a family,” Sessa said.