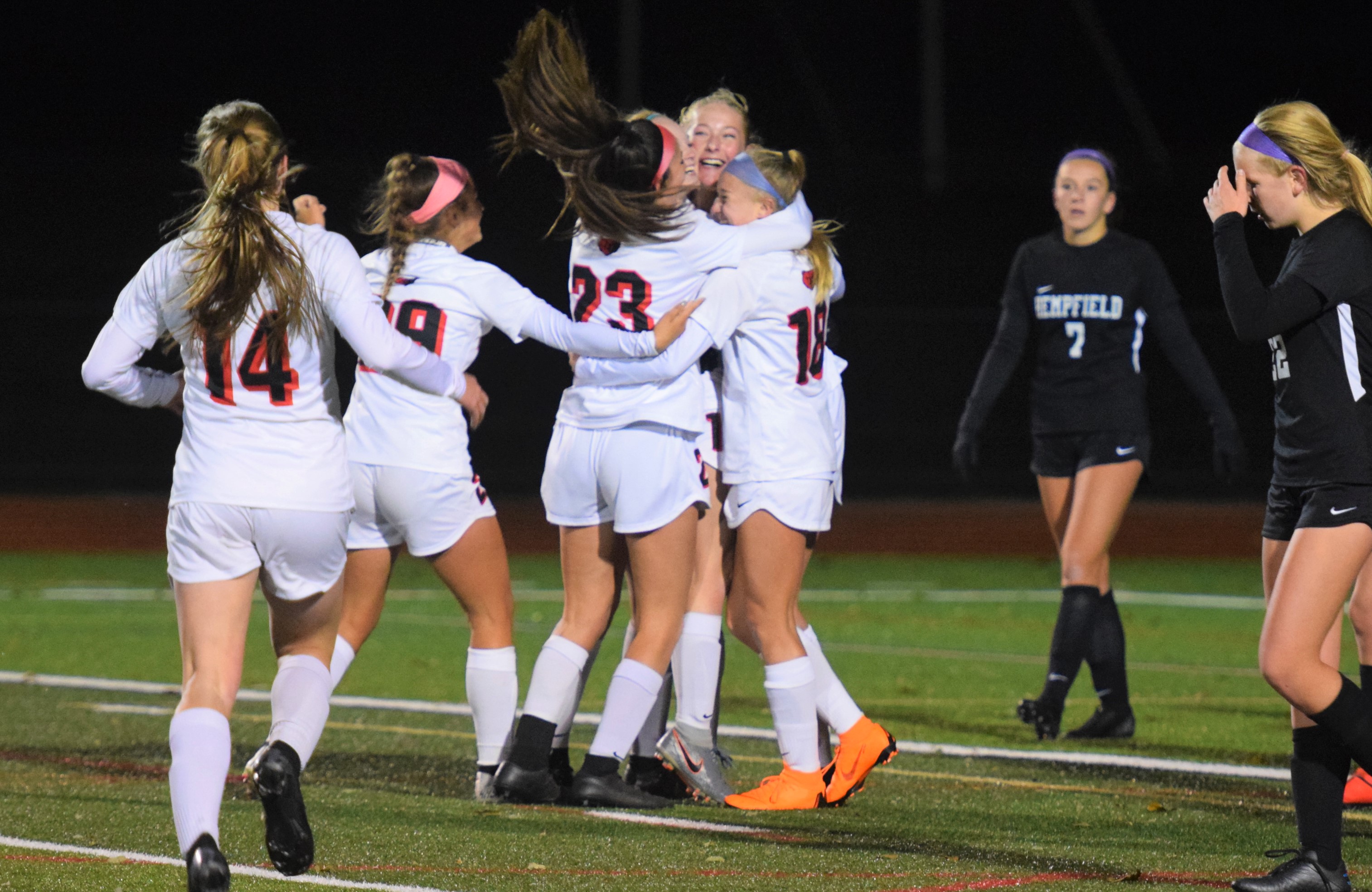 BRYN MAWR >> After nearly 76 minutes of scoreless soccer, Boyertown had a golden opportunity to finally break the ice in Tuesday night’s PIAA Class 4A girls soccer semifinal. The Bears took advantage of it with a well-executed corner kick and will play for the state championship after a 1-0 win over Hempfield at Harriton High School.

Camilla Kuever put in a header off a corner kick from Mikayla Moyer with 4:11 remaining in regulation play after a tight defensive battle with only occasional chances for either side. The Bears (25-2) will play for the title Friday at 4 p.m. at Hersheypark Stadium against the winner between Pennridge and Conestoga.

“It’s amazing, it’s crazy, it’s unbelievable,” said Moyer. “I knew at the beginning of the season that we’d be good, but I didn’t know we’d be this good. It’s a dream come true.”

“It was a really tough game,” said Kuever. “Hempfield is a really good team. I feel like that’s our thing. Scoring late, winning the game. We’re really excited.”

Boyertown’s Camilla Kuever (22) heads in the winning goal in the second half against Hempfield during a PIAA 4A semifinal Tuesday at Harriton. (Austin Hertzog – MediaNews Group)

Neither team created many scoring chances until the pace picked up late in the first half. Then District 3 champion Hempfield (18-4-1) put together a quick pair of corner kicks approaching the midway point of the second, resulting in a shot on goal and another try that was blocked.

District 1 runner-up Boyertown took over from there and only a pair of diving, one-handed saves by Black Knight goalkeeper Emileigh Antesberger kept them from taking the lead.

But the Bears continued to put on the pressure and Moyer’s corner kick from the right found Kuever, who headed it back the other way into the upper right corner of the goal.

“Just yesterday, we practiced it,” said Kuever. “The ball was great. Of course, I have an advantage with my height. That’s exactly how we wanted it.”

“A lot of these games come down to restarts,” said Boyertown coach Bill Goddard. “We executed, and the rest was history. Mikayla Moyer served a great ball to Camilla, and she did what she’s done all year, scoring a big goal.”

Defender Morgan Kline (17) and goalkeeper Mattie Gallagher hug as the run off the field after defeating Hempfield in a PIAA 4A semifinal Tuesday at Harriton. (Austin Hertzog – MediaNews Group)

Both Bear goalkeeper Matti Gallagher and Antesberger made five saves. Boyertown had a 4-3 advantage in corner kicks.

“Two very, very good teams,” said Goddard. “My hat’s off to Hempfield. We knew they were going to be stingy defensively. They’re as good defensively as anybody we’ve played all year. We made some adjustments at halftime. They finally kicked in the middle of the second half.”

“We needed to control the ball,” said Moyer. “We knew their midfield would be good. We had to make sure we didn’t make any big mistakes and just play the way we always play.”

“I feel like our defense did a really great job in this game,” Kuever added. “And our goalkeeper played a great game. I think we improved in the second half, making more scoring opportunities.”

Boyertown had made only one previous state appearance, winning in the first round and losing in the quarterfinals in 2013.

Moyer thinks the key to this year’s run is the way the Bears have learned to play as a team.

“The chemistry between every one of us is huge,” she said. “That’s probably the biggest aspect.”

Boyertown’s Kayley Mattis blocks the pass of a Hempfield player during their PIAA 4A semifinal Tuesday at Harriton. (Austin Hertzog – MediaNews Group)