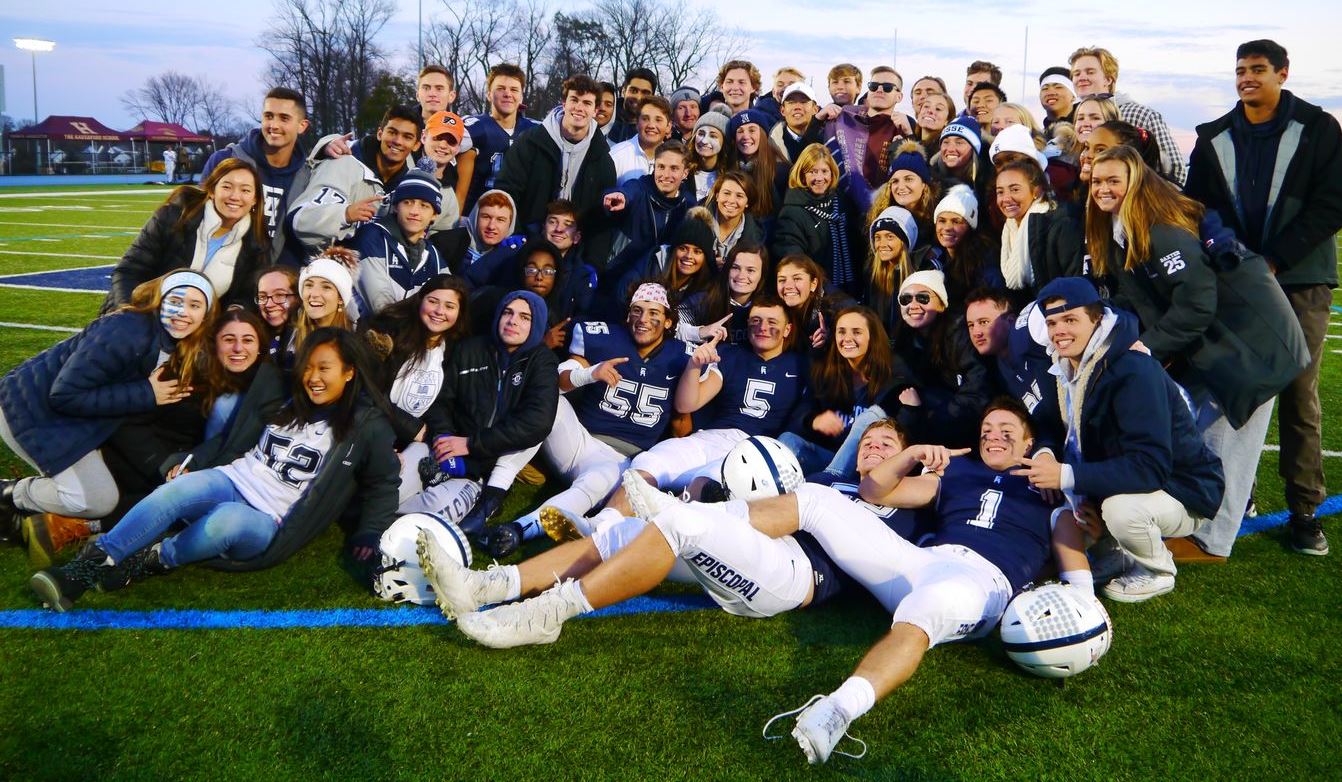 Newtown Square >> Last weekend was a banner one for Episcopal Academy, as the EA girls’ and boys’ teams won both the Banner and coveted Sweater against long-time rivals Agnes Irwin (girls) and Haverford School (boys).
“Everyone [at EA] shares in this success,” said Episcopal Academy Athletic Director Gina Buggy. “It has been a hugely successful fall season. Capping this off with winning back the Sweater and keeping the Banner creates incredible excitement for our school community.”
It was a whirlwind weekend, including nine contests and school spirit that culminated with an all-school Pep Rally Nov. 8. The results were as follows:
EA wins Banner
EA-Agnes Irwin Day Nov. 8 brought blustery winds and temperatures in the 30s, and the EA tennis (5-2), cross country (20-37), and field hockey (5-1) teams were victorious and secured the Banner with a 3-1 win over AIS.
Agnes Irwin won the soccer battle 1-0, getting a goal from Nicole Pansini in the first half. AIS goalie Amelia Leyden recorded 12 saves.
“It was a very exciting weekend for our entire community,” said EA girls’ tennis coach Whit Powell. “I am proud of the girls winning a tennis match in very difficult conditions. More importantly, I was impressed with how they handled themselves amongst a ‘non-tennis’ atmosphere and won, as they have all season, as a team.”
EA girls’ cross-cuntry coach Lauren Finnical said, “Our cross country team ran a strong race in cold and windy conditions. We have been working all season on running in packs, closing the gaps, and focusing on effort. Our runners executed that well on Friday. Winning the Banner and the Sweater is an awesome way to cap off the fall season.”
For the EA field hockey team (19-1-1, 9-0-1), Ashley Sessa scored twice, and Macy Szukics dished out two assists and scored one goal. EA goalie Gianna Cilluffo recorded five saves.
“Our spirited rivalry with AIS and Haverford did not disappoint,” said Buggy, who is also the EA field hockey head coach. “The field hockey team came out strong and put up four goals on the way to a 5-1 victory. The win capped off an undefeated Inter-Ac championship season. It was a total team effort in front of a large and enthusiastic crowd.”
EA wins Sweater
On EA-Haverford Day Nov. 9, the EA boys’ cross country team ran away with the first win of the day. EA was victorious over Haverford (24-32) with runners finishing in first, third, fifth, sixth and ninth places. The Fords won the golf match at Aronimink Golf Club, 148-152.
In water polo, Haverford School (27-1, 8-0) completed an undefeated Inter-Ac season, winning 18-6. Ryan LaRocca collected seven goals and three assists, and Jake LaRocca added three goals to pace the Fords. Dave Gabora pitched in with two goals, two assists and four steals.
In boys’ soccer, EA secured the next win of the day (1-0). It was the first time the boys’ soccer team has won on EA/Haverford/AIS Weekend since November 12, 2005 on EA’s Merion campus. Jackson Tuma put home a pass from Eddie Jones in the first half and that’s all the Churchmen (6-9-4 overall, 4-6 Inter-Ac) would need to win the soccer game, 1-0. Goalie Trevor Manion took care of the rest with eight saves for the shutout. Will Boyes made three saves in goal for the Fords, who would be taking on Kiski School Nov. 13 for the Pennsylvania Independent Schools Athletic Association (PAISAA) title.
“We knew that cross country had won and that golf was tight,” said EA boys’ soccer head coach David Knox. “But we didn’t want to know any other scores. The team remained focused, determined, disciplined and worked together for the win, outworking Haverford. The scene at the end with the students flooding the field was awesome for the seniors and the team to experience.”
EA’s football team earned a 38-28 win to determine the rights to the Sweater and this year’s Inter-Ac championship title.
“This was the second time in three years we have won the Sweater and our third consecutive win over Haverford in football,” said EA football head coach Todd Fairlie. “This was the culmination of all of our hard work. We played our best football of the year on Saturday.”
“Our faculty, administrators, plant personnel, and fans are instrumental in hosting and supporting this rivalry weekend,” said Buggy. “Everyone shares a part in winning the Banner and Sweater. It is team work at its best.”
“I’m especially happy for our seniors and for Ms. Buggy,” said Finnical.
“It was a thrilling weekend for EA,” said Buggy, who is retiring in June after 34 years at EA.