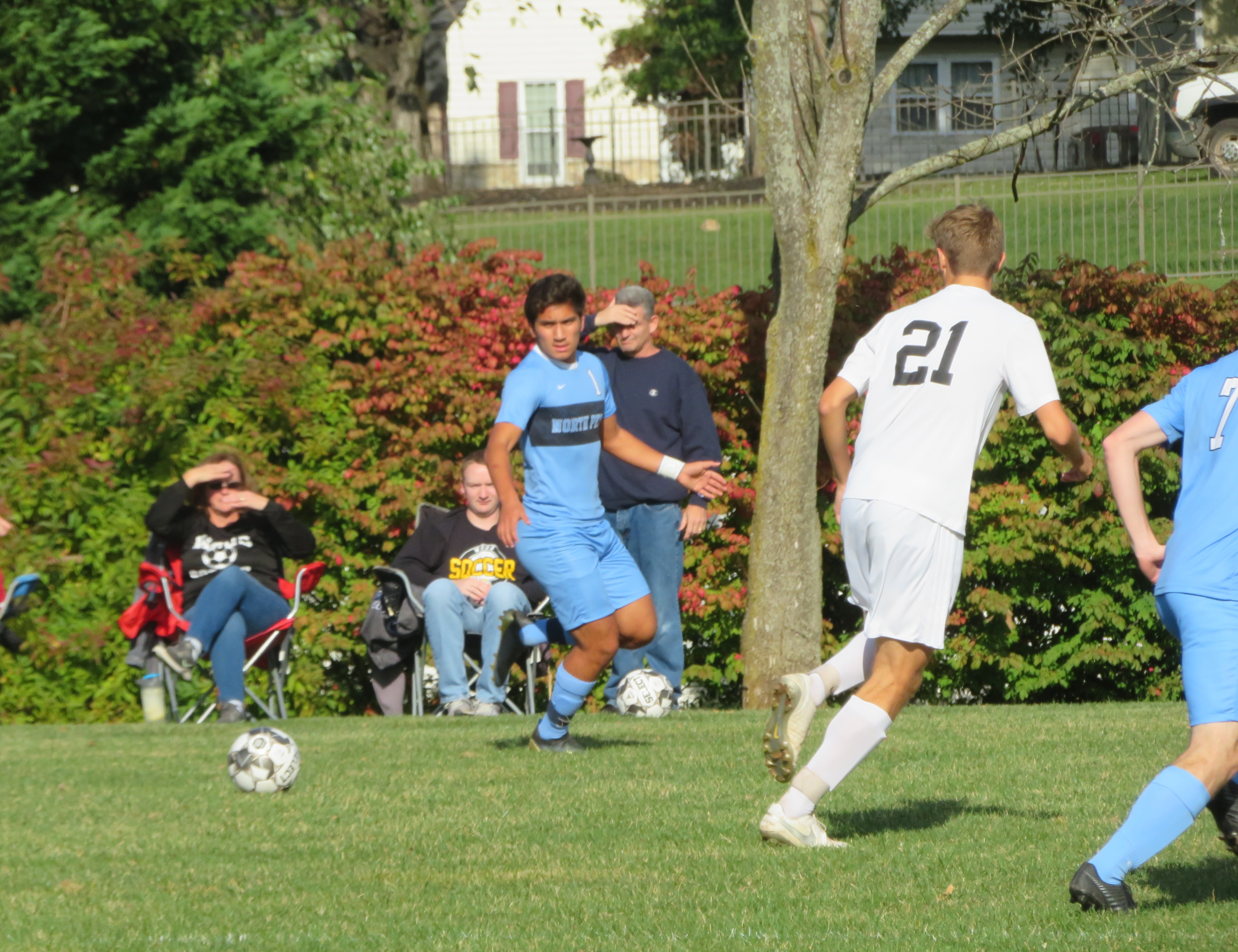 ROYERSFORD >> Ryan Stewart has scored two of the biggest goals of the season for North Penn and both have come against Conestoga.

The North Penn senior blasted in a close range finish after Josh Jones flicked on Carter Houlihan’s throw in with 9:27 left in overtime Saturday as the District 1 champion Knights downed the Pioneers for the second time in less than two weeks. Back in the district semifinals, it was a Stewart goal that provided the winning margin, a feat he duplicated in the state quarterfinals.

This one meant a bit more, giving the Knights a 2-1 overtime victory Saturday at Spring-Ford and sending North Penn to its first state semifinal appearance.

“We were getting a lot of crosses in all game and I knew eventually someone was going to miss and it was going to roll through,” Stewart said. “I just went and followed the path of the ball and it came right through to me.”

North Penn will face PCL and District 12 champion La Salle, a 2-0 winner over Lower Merion, in Tuesday’s semifinals. The Knights topped the Explorers this season by a 2-0 margin in late September.

Stewart, who managed to lose his shirt along the way, led a stampede of Knights players to the far sideline and their fan section to conclude an intense, physical and hotly contested match between two quality sides. Neither team wanted to go home for the year and they both played like it with ‘Stoga keeper Aidan Niggeman and North Penn goalkeeper Saywer Meade both making season-saving stops during regulation.

It was a tough ending for the Pioneers, but Conestoga coach David Zimmerman had no issues with the way his team performed on the frigid afternoon. While the name Conestoga and the red and white C crest invoke the idea of a powerhouse program, this was a team that did its growth during the season.

“I’m very proud of our guys’ effort and I told them you can sleep at night as long as you do everything possible and I feel like we did that,” Zimmerman said. “That team (North Penn) is strong all over the field, I can’t take anything away from them and I’d have to think they’re the best team in the state. We did all we could, they were just the better team.”

North Penn has thrived on early goals all season and the District 1 champions did it again Saturday. An early ball over the top found Houlihan with the senior forward able to settle it before pulling away from a defender and pocketing a shot in the back corner just seven minutes into the contest.

In another parallel, the goal was quite similar to the one Houlihan scored to tie the district semifinal just 64 seconds before Stewart won it. The similarities ended there, as this time it was Conestoga who would respond with a tying goal.

A deep throw for North Penn turned into elation for Conestoga when the Pioneers were able to clear the ball and set off a counterattack down the field. Junior Elijah Brown was able to carry the ball down the right flank and whipping a cross into the box.  Senior Nate Xu was able to get there first, chipping Meade to finish the run and tie the match with 30 minutes left in the opening half.

“He should have been marked but it was a counter so he wasn’t and I should have come out earlier,” Meade said. “He just flicked it over me. I just told the guys to keep their heads up and keep playing hard the whole game.”

Niggeman would finish with seven saves and took a lot of guesswork out of the equation with his ability to go up and snare free kicks out of the air, keeping Jones from be able to flick them around the box. The junior made five saves in the first half, the best a denial of a Houlihan header with six minutes left.

Conestoga ended the first half hot, controlling the last 10 minutes and nearly stealing a second goal off a well-taken header by Brown that was stopped by a diving Meade save with 1:24 on the clock. The two would meet again with almost the same amount of time left in the second half, this time with Meade making a diving save to his right to deny a 1-v-1 chance from Brown.

“It’s a lot of reaction and muscle memory pretty much,” Meade said. “It was hard with the Sun in my eyes too, on the header I could not see it until it came down so that was very reactionary. A lot of times, I don’t know the words for it but you just know what to do in the moment.”

“You have to finish,” Zimmerman said. “North Penn, they’re big and have some off the charts talented players that you don’t typically see more than one guy like that on a high school team. We didn’t play anyone better than them this year.”

The second half was quite feisty and the Knights drew a lot of corner kicks but Niggeman and his back line including Cael Willner, Simeon Dorsey, Matt Doble and Patrick Kelly did their job to get the ball out. It’s a senior heavy backline but the Pioneers mixed a lot of underclassmen into their lineup and bench that bode well going forward.

“We’re a relatively young team and looking at the trajectory of our season, we grew tremendously,” Zimmerman said. “If you had seen us at the beginning of the year compared to what we were able to do tonight, it was a significant difference. As a coach, that’s what you want to see and the whole point is to squeeze all you can out of a group of players.”

At the end of regulation, Houlihan gathered his team and delivered a fiery speech imploring them to start the extra period like they had started the first half. North Penn did just that, drawing two corners in the first five minutes before the deciding throw-in.

Houlihan didn’t rush the throw, sized things up and heaved it toward Jones at the top of the box. The 6-foot-4 junior flicked it on, with the ball hitting off a defender before the hard-charging Stewart came in and unleashed a half-volley that sailed into the net.

“We knew we had the advantage on set pieces just having Josh on the field and guys like Jamie (Stewart) and Jack Durkin, we knew we had height and the ability to win those,” Ryan Stewart said. “In the overtime we really wanted to make sure we go those opportunities instead of trying to rush it.”

For Stewart and the Knights, it was finding a way to survive the moments they weren’t at their best on Saturday.

“It’s incredible,” Stewart said. “I just try to do what I do best, get in the right position and find the goals.”