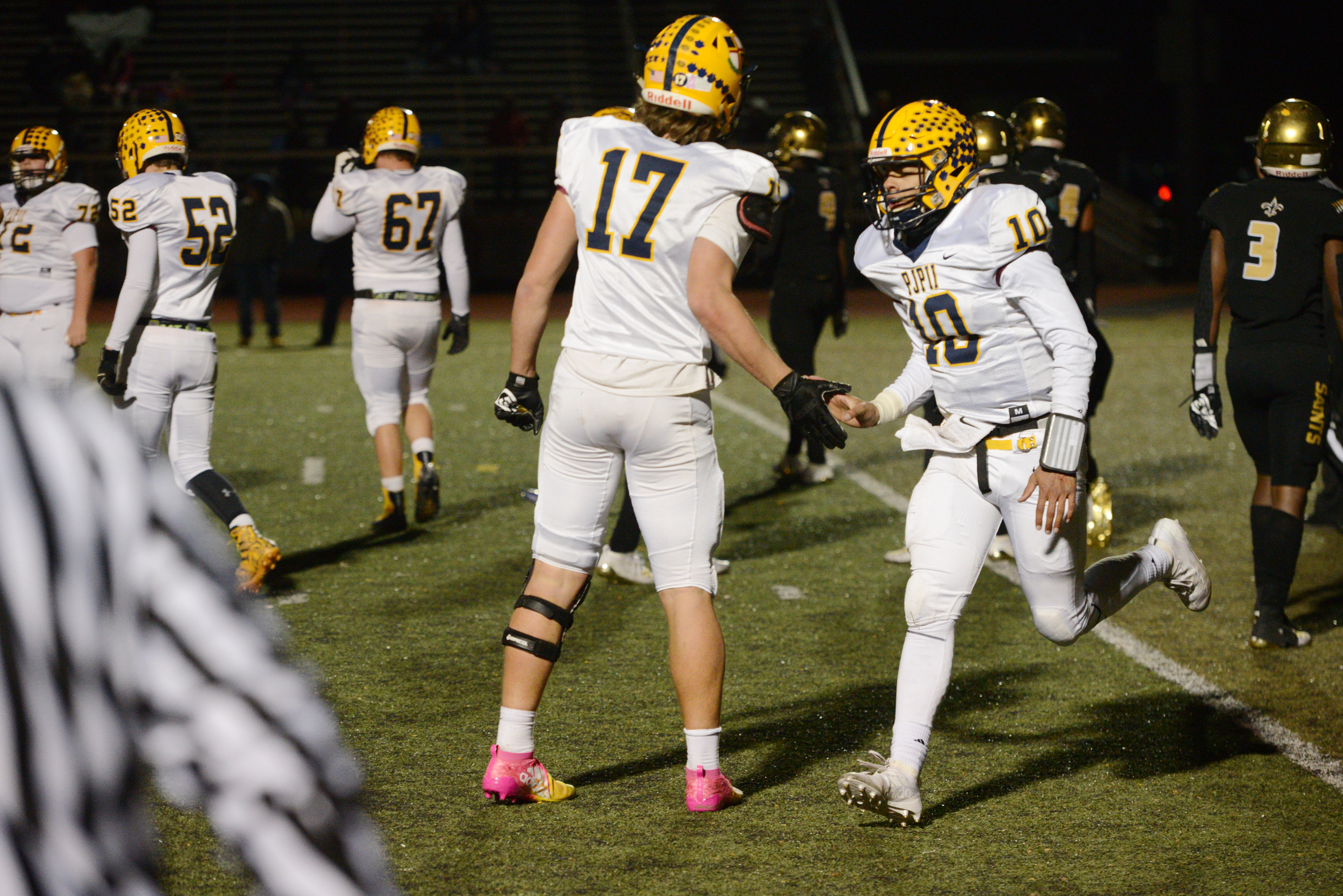 SOUTH PHILADELPHIA >> Andrew McDonald and Kamal Gray won a CYO championship as eighth graders for Visitation BVM before heading their different ways at the high school level — Gray to Archbishop Carroll and McDonald to Lansdale Catholic.

After their sophomore football seasons, Gray told McDonald he might be looking for a change, later letting him know that Pope John Paul II would be his next school.

While the reasons extended beyond the football field, a chance to reconnect with an old teammate and help finish off the building process at Pope John Paul II was an opportunity McDonald relished.

“I wanted a change,” McDonald said. “I felt like I wanted to help turn the program around.”

The group joined the likes of Justin Mitala, John Mattiola, Steve Skarbek and Mark Bowen, who were part of a 7-4 PJP team in 2017 that had gone winless just two years prior.

“To win this game, it’s big for not only us, but the whole school,” said Gray, the team’s senior quarterback. “We’re just happy we could bring it home, we could be the team to make that history.”

That transfer group’s contributions were on display Friday night: Anderson tallied two sacks and was one of the anchors with Dobrowolski on a PJP offensive line that dealt with a relentless Neumann-Goretti pass rush. McDonald led the Golden Panthers with 48 hard-earned yards rushing and added an 18-yard catch.

Walker kicked a 65-yard punt before recovering a fumble in the end zone along with catching two passes for 48 yards, the biggest a 27-yard completion on 3rd-and-16 with two minutes left in the game.

While Gray struggled to throw the ball down field Friday night, he ran in two touchdowns and hit Justin Kormos in stride for a 43-yard touchdown before completing what would end up being the game-winning two-point conversion to Skarbek with 1:32 left in the game.

Walker, Anderson, Dobrowolski and McDonald finished off the win with a defensive stop on an NG two-point conversion attempt with just more than a minute to play.

“Me, Sean, Dylan, Kamal and Andrew, we all came in two years ago,” Dobrowolski said. “A lot of us had known each other already, but we’ve really all come together and we really helped make this team.”

“They came in, they bought in,” PJP coach Rory Graver said. “We’re really fortunate all these guys are team first guys. They always put the team first. We have a really selfless senior class. It’s not about their numbers or their stats or anything like that. They’re just about winning.”

The wait for this moment felt a little longer for McDonald and Walker. McDonald missed most of his junior year, while Walker missed the entire 2018 season, both dealing with injuries.

Both have been difference-makers this season. Walker is tied for the area lead with 10 touchdown catches. McDonald has provided a dual threat out wide and out of the backfield, entering this past week ranked eighth in the area in receiving and 17th in rushing with 12 total touchdowns.

Walker said despite playing together for just two years, this group has gelled together quickly over the past two seasons because of a program-wide mission to do something special, like they did Friday night.

“On and off the field we try to maintain that bond, we try to maintain that brotherhood,” Walker said. “Any one of us will do anything for each other. Whether it’s putting our hearts out on the line on a fourth down, on a two-point conversion to win the game or whether it’s just helping each other out in school, with life. We’ve bonded from top to bottom, senior to freshman. I feel like we’re all really close.”

Pope John Paul II had four one-win seasons in its first five years before bottoming out with a winless campaign in 2015. Though they did not have to suffer through those difficult seasons, the PJP seniors are appreciative of the climb this program has taken.

Milestones like the first division title, first league championship game appearance, first 10-win season and first district championship in the school’s decade-long history have not been taken for granted.

“The program’s come from the bottom to the top,” McDonald said. “We didn’t expect this. No one did right? No one expected us to win, but we stayed with who we are … I couldn’t be more proud of this team.”

How does the milestone win compare to a CYO title?

“This is definitely bigger,” Dobrowolski said.

“They’re a big physical football team,” Graver said. “They’re really disciplined. They’re really well-coached. They like to run the ball, but they have a really accurate quarterback. Defensively, they’re fundamentally sound, they fly to the football. It’s going to be a really tough game, but being in the state playoffs, every team you play is going to be good, so we definitely have to be at our best.”

The story of the first two rounds of the Class 6A playoffs has been the upstart Fords of Haverford High. Most Central League fans would’ve believed the Fords were under-seeded in the No. 12 spot, but almost no one expected the domination exhibited through the first two rounds.

After dispatching of PAC champion and No. 5 seed Spring-Ford, 49-14 in the first round, Haverford was arguably more impressive in its quarterfinal win over No. 4 Downingtown East Saturday, racing to another lopsided first-half lead and coasting to a 35-12.

Trey Blair continued his torrid pace, running for two scores, passing for a third and returning a kickoff 95 yards for yet another score. Blair left early with a hip pointer, but expects to be 100 percent for next week’s showdown back at Kottemeyer Stadium with No. 1 Downingtown West. Haverford is enjoying a ten-game winning streak, allowing an average of only seven points per contest over that time.

The other side of the 6A bracket will feature another Central League vs. Ches-Mont matchup, after No. 3 Garnet Valley pulled away from Plymouth-Whitemarsh for a 56-21 victory Friday. Meanwhile, No. 7 Coatesville predictably outperformed their seeding, topping No. 2 Central Bucks West 41-24.

Garnet Valley and Coatesville will meet for the third straight year in the playoffs this coming Friday, with the Red Raiders having claimed the first two encounters.

It’s been a big postseason on the whole for the Ches-Mont, as the league also has two representatives in the Class 5A semifinals after No. 4 Kennett survived an overtime challenge, 20-14, from No. 5 Strath Haven on Friday. The Blue Demons, enjoying their best campaign in school history, will make one of the longest treks possible between two District One schools when they travel to No. 1 Cheltenham, who outlasted Unionville on Friday.

Meanwhile, No. 7 WC Rustin upended crosstown rival and No. 2 seed West Chester East on Friday, 14-7. The Golden Knights held District One’s leading rusher, Kyle Cichanowsky, to only 76 yards in the upset. Rustin advances to face No. 3 seed Academy Park in yet another rematch from the 2018 playoffs (Rustin prevailed, 42-6). Academy Park topped Del-Val rival Penn Wood in an 8-6 slugfest this past week.

Last but certainly not least, another Ches-Mont squad, Bishop Shanahan, emerged from a wide-open 4A bracket to claim the district title with a 35-0 shutout of No. 1 Upper Moreland on Friday. It was the second straight road victory for the Eagles, who ended Pottsgrove’s three-year reign atop the district last week.

Shanahan moves on to battle District 4 victors Jersey Shore in the first round of the PIAA 4A playoffs this Friday.