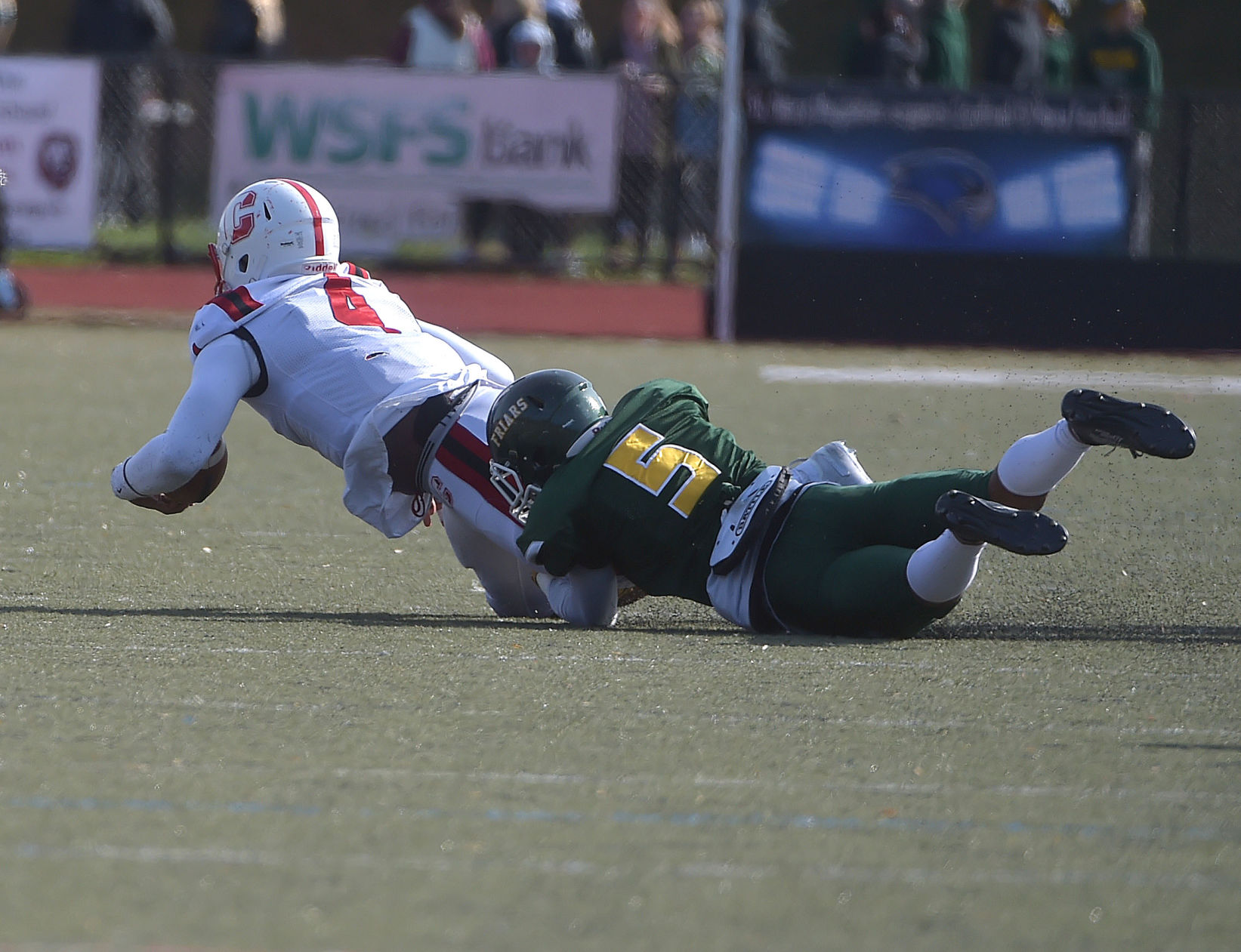 MARPLE — One year and one week ago, Bonner-Prendergast’s season came to an end at the hands of Archbishop Carroll. The Friars waited, they improved. They beat the Patriots in the regular season.

Saturday at Cardinal O’Hara, they got their revenge.

Amid enough twists and turns to suffice a film script, Bonner-Prendergast downed Carroll 35-20 in the District 12 Class 4A semifinals. The Friars advance to the district title game next week against Imhotep Charter.

Bonner-Prendergast quarterback Kyle Lazer picks his way through the Archbishop Carroll defense in the first half Saturday in a District 12 Class 4A semifinal game between the teams at Cardinal O’Hara High. (Pete Bannan/MediaNews Group)

“Last season, it was horrible, I’m keeping it honest,” linebacker/running back Oscar Uduma said. “It just felt (great), coming back to beat them twice. On the same field we lost to them last year. It just feels like a different type of enjoyment.”

Uduma would know. The senior caught the winning touchdown, a six-yard slant from Kyle Lazer late in the fourth quarter. His interception a few possessions earlier, in a roundabout way, set the whole thing up.

Carroll (6-6), coming off a goal-line stand, was driving for the lead early in the fourth. Uduma stepped in front of a screen pass and ripped off a 25-yard return the other way. Then he fumbled. Carroll recovered and got a fresh set of downs. The drive went nowhere, it punted. But, a low snap caused Nick Lamey to catch the ball on a knee. The punt never happened.

Bonner-Prendergast got a short field. It got to the 1-yard line. It was stuffed twice. It moved backward on a false start. Then, finally, Lazer hit Uduma on fourth down. Phew.

“It means a whole lot,” Lazer said. “Last two years have been rough, and I was here since the last two years. We always knew we had the talent, we just needed to work hard at it. And this season goes to show, we put the work in, we’re ready to go.”

Uduma called for the ball. He knew the play was going to be there. This was something that’s been practiced time and time again. Lazer, who tossed three touchdowns, didn’t hesitate.

“I knew he was going to be wide open,” he said.

Then it was on the defense. Russell Minor-Shaw gave them fits in the first half. It was his first game fully back since a September ankle injury. So, the Friars adjusted. They wanted to keep the athletic quarterback in front of them.

In the second half, Bonner-Prendergast had two interceptions and yielded one score on a drive extended by a roughing the kicker penalty.

“We switched it up, put one of our fastest d-ends in the middle of the three (technique), so if he did break out, he wouldn’t be able to run away from all three of us,” said Uduma, referring to teammates Mason Peterson and Nasim Rhodes-Nelson. “He can’t run away from us, he couldn’t run away from us.”

B-P 35, Carroll 20. :42 4q. Mason Peterson with the exclamation point. 20-yard TD run. Carroll turned it over on downs on the previous possession. Friars can celebrate a PCL 4A title #delcofootball pic.twitter.com/p9ETnQapnD

Carroll turned the ball over on downs after Uduma’s touchdown. Peterson (111 yards) responded with a 20-yard touchdown run for the exclamation point. Less than a minute after that, Bonner-Prendergast was celebrating.

This was not lost on coach Jack Muldoon. His team survived a bad fourth quarter trick play and a bad late first-half squib kick. They are now a fully grown program with a signature victory.

Archbishop Carroll’s Malachi Hansen scores as Bonner-Prendergast’s Charles Ingram can’t get to him in the first half. (Pete Bannan/MediaNews Group)

“It means a lot that the kids see this, that the school gets this,” Muldoon explained. “We have a pretty rich history, it’s just in the last few years haven’t been able to get really kind of get over the top. Now, we are.”

When Muldoon took over, there were 33 kids in the program. Now there are 83. Now Bonner-Prendergast has a Freshmen team. Now, after four wins over the past two seasons, the program has its first playoff win since 2013.

The offensive and defensive lines made it happen. Muldoon knew he had the skill position talent all along. The trenches would take time to develop. Well, they developed.

“We can put pressure on the quarterback, and that kid’s a really, really good quarterback,” Muldoon said with a reference to Minor-Shaw. “I’m sure being like that, give the kid credit. He hung in there. Tough as they came.”

Minor-Shaw passed for 214 yards and three touchdowns – a 35-yarder to Malachi Hansen, a 10-yarder to Nick Lamey and a 29-yarder to Mike Dempsey. He answered Lazer’s two long first half scores to Rhodes-Nelson to make it a 14-14 game at halftime.

Carroll scored on the opening drive of the second half, but that was it. Gaven Pagan-Hunt’s interception and subsequent return set up Armon Mapp’s seven-yard touchdown run late in the third quarter. A fumble on the ensuing kickoff yielded that Carroll goal line stand, which then paved the way for Uduma’s theatrics.

Bonner-Prendergast’s reward for this victory is a date with the class of the Public League. Imhotep Charter (7-4) was a state finalist last year and won the thing in 2015. It will be a challenge.

“This week’s going to be a pretty good week of practice,” Lazer said. “We’re ready.”

Carroll had one victory in 2016, three in 2017 and five last year. That upward progression is encouraging. Still, last week, the Patriots won their first playoff game in over a decade.