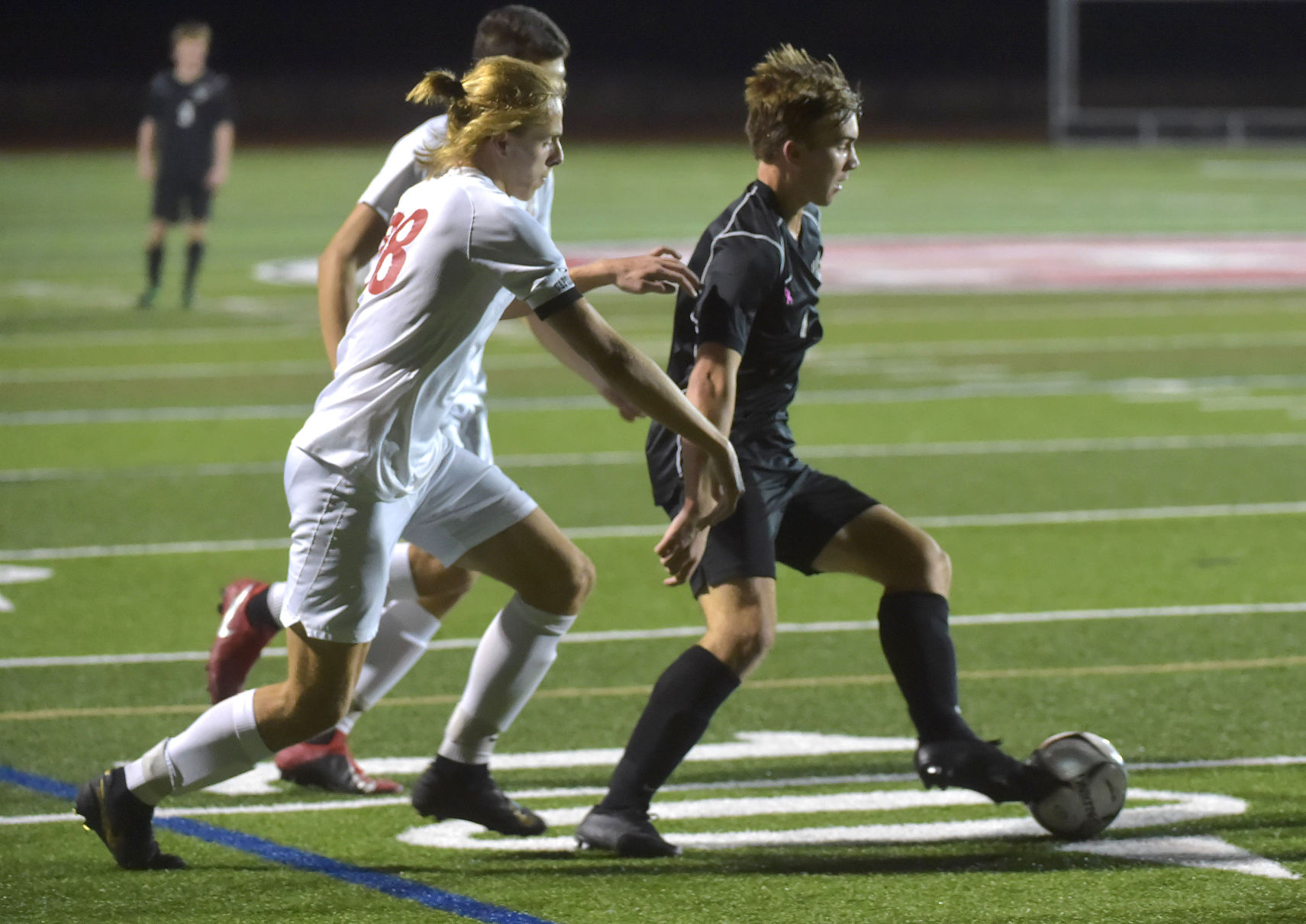 Strath Haven's Peter Boerth, right, seen taking on a pair of Susquehannock defenders in Tuesday's opening round states game, had a goal and an assist Saturday as Strath Haven beat Selinsgrove, 3-0, in the PIAA Class 3A quarterfinals. (Pete Bannan/MediaNews Group)

SOUTH LEBANON – With a laugh and a playful shot to the stomach, John Francis left his teammates in the dust.

There were 20 minutes left in Saturday afternoon’s game, and a trio of black-jerseyed Strath Haven attackers queued at the halfway line to be subbed in. As they waited, a Selinsgrove player hit the turf, needing to come off injured. The Seals replaced one player, allowing Strath Haven to replace one.

So off like a dart went Francis, leaving his two teammates to wait for the next whistle to get their turn at the Seals backline.

The two Panthers Francis left waiting on the touchline had a hand in the opening goal Saturday. And each of the three that would come off registered a goal or an assist.

For a team that has jelled in recent weeks, it was another comprehensive performance, the District 1 champion downing District 2 champ Selinsgrove, 3-0, in the PIAA Class 3A quarterfinals at Cedar Crest High School.

When all goes to plan for Strath Haven, its cohesive veteran backline and the midfield trio of Jake Hooper, Emmet Young and Andrew Lowman never leave the field. So the spark is injected from the bench via the front three, rotating in two platoons. When both are producing goals, as they did Saturday, they’re hard to stop.

“That’s the great thing about our team,” Tim Wright said. “There’s goals everywhere around the team, in the second unit, in the first unit, the midfield helps out. We like to think that everyone can contribute in their own ways, and it happened today.”

Strath Haven bested Wood, 3-2, last year to get to the state final, where the Panthers lost to West Allegheny … which was eliminated Saturday by Lower Dauphin.

After a sluggish start, the second platoon provided a jolt. Quinn Vandellos’ original shot in the 24th minute was saved by Cole Catherman. But Wright was on the rebound, supplying a clinical finish to put Haven ahead.

After halftime, the starters reasserted themselves with two goals in seven minutes. Young found Peter Boerth on a run down the left channel at what seemed to be too sharp an angle. But the starting center forward whistled a shot on the perfect line to beat Catherman and make it 2-0.

Three minutes later, the starting trio of Boerth, Ethan Birch and Salvatore Kaufman played tic-tac-toe in combining on the third. Boerth settled a long ball from defense and played square to Kaufman, who centered to Birch for a delightful chip that carried over the retreating Catherman and in.

“I knew it was going in,” Birch said. “I just didn’t know if the keeper was going to hit it over or not.”

With the return to health by Francis, coach Ryan O’Neill has the luxury of rotating what are essentially hockey lines up top, starting Birch-Boerth-Kaufman, then subbing in Vandellos-Francis-Wright. It’s helped build chemistry that has translated into goals.

“It’s nice to have a rhythm,” Wright said. “Both John and Quinn are great team players, so we’re able to work well together. And Quinn kind of helped lead to my goal. And we know how each other is going to play, and it’s really nice to have that stability in terms of knowing who you’re going to play with.”

Francis scored the game-winner in overtime of the District 1 semifinal against Bishop Shanahan, after Birch had the late equalizer. Vandellos got Haven on the board in the district final before Boerth drew the decisive overtime penalty, converted by Young.

The first-round states win was fueled by midfield goals from Young and Lowman. But Saturday’s division of labor illustrates how adept the Panthers are at showing different looks and fresh legs with little drop-off in quality.

“It’s great,” Birch said. “Whenever I need a breather or anything, I can come out and I can trust them to get the job done until I can come back on.”

“If your team’s not playing well, try to come in, change some things,” Wright said. “Obviously you’re bringing your own unique style as well as adding to what the team is trying to do.”

Haven’s midfield dominance helped it control the game, save for one blip at the end of the first half. In that brief lapse, Charlie Shankweiler provided three of his five saves, charging off his line to take a ball off the foot of forward Nick Ritter near the penalty spot, then aggressively running out to snuff a shot by Kyle Ruhl in the final minute.

Other than that, though, the midfield and defense made it a fairly sedate day.

“They definitely make it a lot easier because when we win the first head balls, they pick up the second and third balls,” center back Harris Hardy said. “And they also just hold really well and are solid in front of us.”

Haven had the better chances even while up three goals. Wright clattered a shot off the bar in the chaos of a long throw. Young clipped the crossbar from outside the box, he and Lowman firing away.

The one-way traffic got Haven one step closer to its preseason objective.