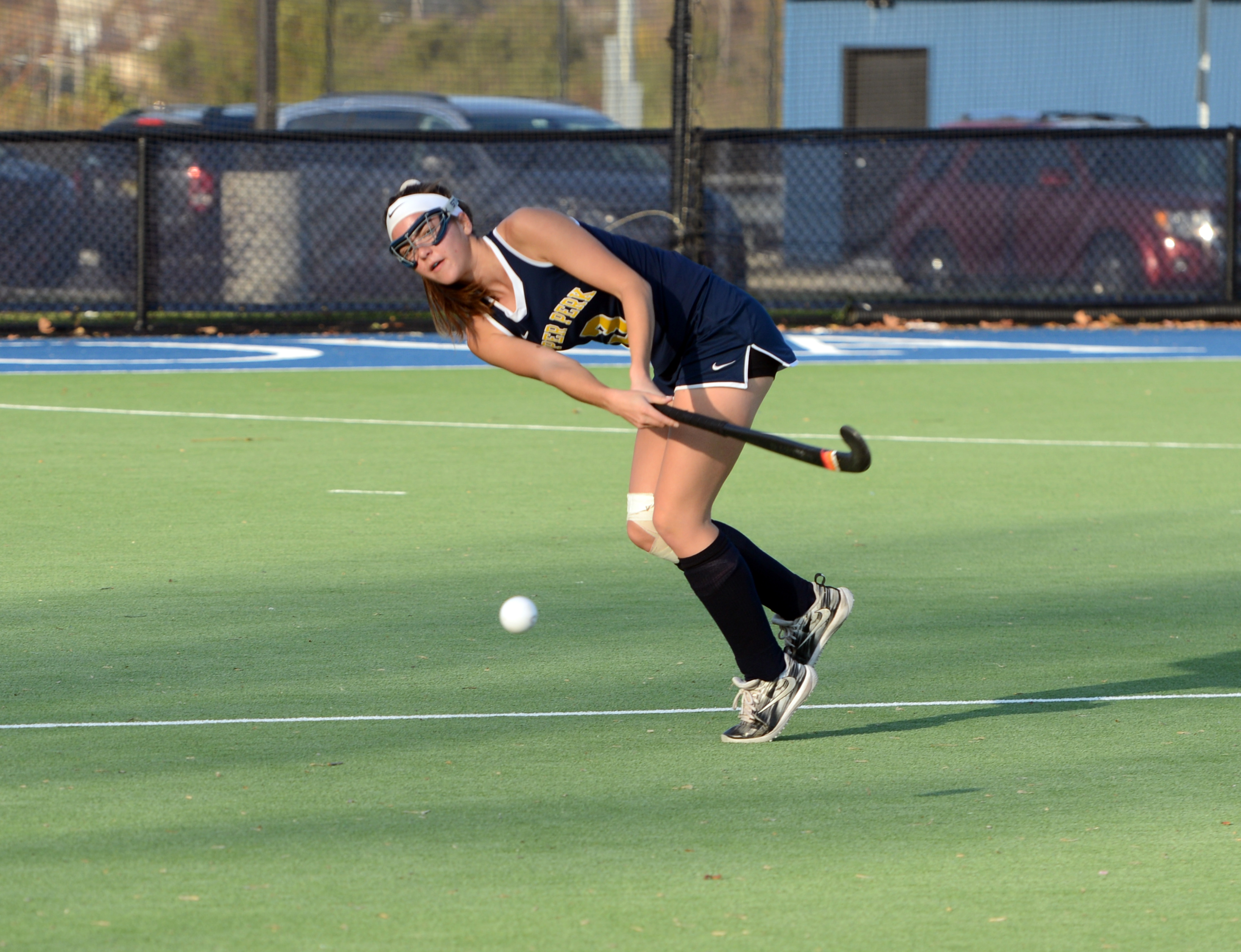 GEIGERTOWN >> The back of Kent Harshman’s jacket speaks volumes about the recent championship legacy of Palmyra since Y2K began.

State championships in 2004 and 2014, and state finalists three times in the last four years. Nine District 3 titles to boot.

“All that says,” Harshman said with a laugh, “is I’m older than dirt.”

Perhaps. But his program is in position to add another year to the embroidery.

The Cougars moved one step up the postseason title ladder Saturday by shutting out Upper Perkiomen, 2-0, in a PIAA Class 2A quarterfinal at Twin Valley. While they head to Tuesday’s semifinal round against Twin Valley — a 3-0 winner in other quarterfinal action — the Indians saw their memorable 2019 season end against the District 3 champion.

A pair of Lauren Wadas goals proved to be sufficient for Palmyra to move on. The Cougars’ tough defense made the production stand up, allowing UP to just one shot and seven corners for the game … in comparison the Cougars’ 12, nine of which they got in the first half.

“I think when you reach state level, you have to play your best game,” UP coach Jamie Warren said. “We didn’t do that.”

The Indians, coming off Tuesday’s opening round state win over Archbishop Carroll, weren’t able to answer Palmyra’s ball control or numerous defensive steals and blocks. The Cougars controlled play at UP’s end of the field for the first 10 minutes, with the Tribe able to get into the other territory only a handful of times in the early going.

“We were on our heels at the start,” Warren said, “but we were able to work it off. We needed to be more confident.”

Palmyra’s confidence got a boost from Wadas’ first goal, off a corner at the 12:44 mark of the first half. It added insurance at 4:05, Wadas again converting a corner shot by Mia Julian.

That was all goalie Katie Knol would require while stopping UP’s lone shot to secure the shutout.

“Our back forward on defense were good today,” Harshaman said. “I give Upper Perk credit. They played excellent defense, stopping our rushers.”

The Indians’ best opportunity to get on the scoreboard came around the midpoint of the second half, when they drew four corners in succession. In each instance, Palmyra was able to extinguish the threats.

“We teach leadership and skills through our players being involved in the Weed whacker (youth) program,” Harshman said. “We always say each year we’re reloading, not rebuilding.”

Upper Perk had on direct try inside the final minute of the first half, but that and a corner shot were stopped. Its second-half recovery was marked by drawing six corners and getting control of the action around the 2:30 mark in the game.

“We don’t get to the second round (of states) very often,” Warren noted. “We could have done better.”

The Indians finished at 18-6 in the 2019 season that saw them sweep through the Pioneer Athletic Conference’s Frontier Division schedule, then win the PAC’s Final Four playoff championship before going runner-up in the District 1-2A tournament.

“We had an excellent run since PACs,” Warren said. “We played at a high level, and with confidence.”

NOTES >> In addition to Julian, Palmyra’s Abby Mateer was credited with an assist on Wadas’ first goal. … Lynnsi Joyce had six saves in goal for UP, all coming in the first half.