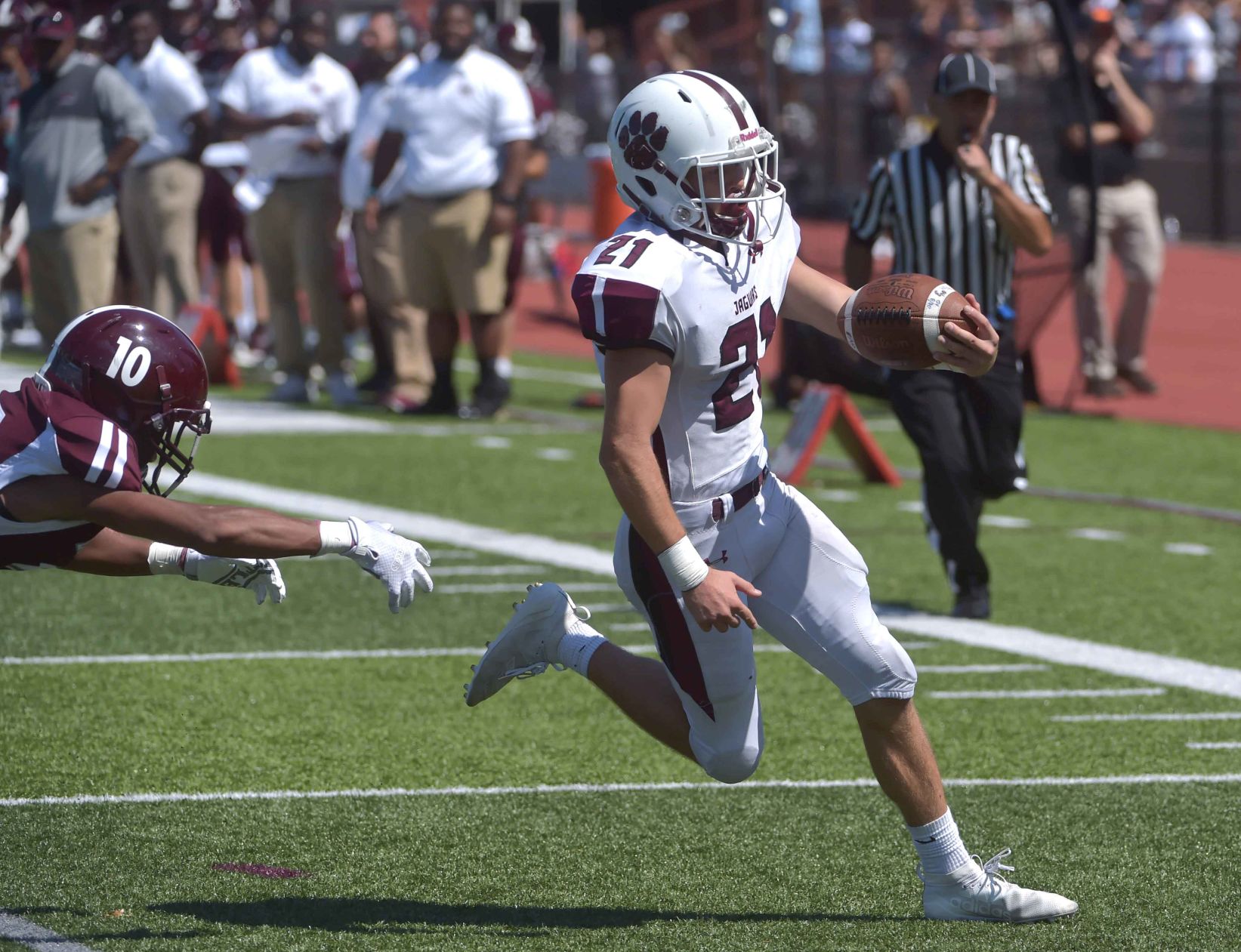 Garnet Valley's Greg Reynolds, seen in a win over Lower Merion in September, scored five times Friday night in a 56-21 win over Plymouth Whitemarsh in the District 1 Class 6A quarterfinals. (Pete Bannan/MediaNews Group)

CONCORD — Greg Reynolds had a good idea that it could be a special night Friday when he slipped through an off-guard gap large enough to fit a school bus and roared 53 yards to the end zone.

Jake Morin got the feeling when he was wrapped up on the play by a passel of bamboozled Plymouth Whitemarsh tacklers who thought he had the ball instead of his free-running teammate.

There’s that West Coast, razzle dazzle we all know Garnet Valley for. Gallagher to Reece Malek for 41 yards on third and 16. PW sideline just got quiet.
35-14 GV. 8:26 left 3Q. pic.twitter.com/Vxd3PwdxXx

“It was awesome,” Morin said. “I’m making the fake and I just hear the roar from the crowd and I hear Greg break one. It’s an amazing feeling, and I just know our offensive line is doing a great job of opening great holes for us.”

“I got to see how their defense reacted to all the running I do,” Reynolds said. “And I think that was the one I kind of hit it on.”

37 yard punt return by Morin to the 6. Jags in business. pic.twitter.com/q2noc1BT0q

Morin did the work between the tackles, bulling his way to 63 yards on 16 carries without breaking a big gainer, as he usually does. But that was fine for two reasons. First, Reynolds supplied the big plays in abundance. Second, Morin found myriad ways to impact that game.

Against PW (9-2), which utilizes a similar run-based attack, many of the blocking and option cues were familiar to the Jags. That made for a streamlined but intensive week on the practice field for the scout team to prep Reynolds and company.

The result was 357 rushing yards on 50 carries. Morin and Evan Fenster added one-yard touchdowns to provide seven scores on the ground.

“During the week, the scout team, they go 100 percent the whole entire time showing us what Plymouth Whitemarsh’s defense looks like,” Reynolds said. “So when we get out to the field, everything flows so well and I’m able to get a better read on everything.”

Morin made his presence felt in other phases of the game. The biggest came midway through the second quarter, with the game tied at 14, when he fielded a punt near midfield on a bounce, gained the edge to find a well-constructed Garnet wall and dashed 37 yards to a first-and-goal. Two plays later, he was into pay dirt on a one-yard dive.

It was part and parcel of a dominant day by the Jags’ special-teams units. Bryce Stansfield was 8-for-8 on extra points. He punted once, a booming 50-yarder that buried the Colonials at the 1, setting up the end-zone punt that Morin returned to the red zone. In the fourth, Stansfield made the read on a fake punt and gained nine yards on fourth-and-6 to set up Reynolds’ fifth score four snaps later.

“Our offense and defense do a great job of pounding and doing their job,” Morin said. “But to make a play on special teams, that’s going to change the outcome of the game.”

Morin also did plenty on the defensive end. By and large, the Jags bottled up the Colonials’ potent run game, save for one long Dresnin score. They completely nullified the pass, with Larry McLaughlin going 4-for-10 for 41 yards, two of the completions for negative yards. McLaughlin was sacked six times.

Morin was one of the main perpetrators, with 2.5 tackles for loss, using his powerful, low-to-the-ground burst to get upfield off the edge.

“Having Jake on the field is spectacular,” lineman Alex Westburg said. “The kid has a motor that never stops going. I’ll ask him on the sidelines, ‘you alright, you tired?’ and he’s like, ‘not at all.’ He’ll go out on the field and I’m 100 percent safe and I know that he’s going to do his job and he’s the type of player that will come up with a big play for us.”

Again, the scheme echoes between the teams were pertinent. Though PW utilizes more pre-snap motion and sweeps instead of Garnet Valley’s straight-ahead style, there were similarities to exploit.

PW gained 267 yards on 40 carries. Dresnin ran for touchdowns of one and 76 yards on the way to 157 yards, and Mike Paciello added an 18-yard score. But the interior-line push of Westburg and Mitchell Mesaros got the better of them. Ryan Saunders picked up a fumble in the first half, ending a promising PW drive and setting up Reynolds third score, the 44-yarder, for a 28-14 halftime lead.

Quarterback Ryan Gallagher, who missed last week’s game, returned to the lineup and was 3-for-3 through the air, all on third down, for 84 yards. That included a 41-yard wheel-route hookup with Reece Malek on third-and-16 in the third that put Garnet Valley up 35-14 and took the air out of the PW sideline.

On both sides of the ball, it was the kind of comprehensive performance that the Jags have come to expect this time of year.

“We always think about, we’ve got to get our offense back on the field, we’ve got to make stops,” Westburg said. “And we all come together as a defense and we all work as hard as we can to make that stop. And it affects our offense. They both feed off each other from that and it just keeps going.”