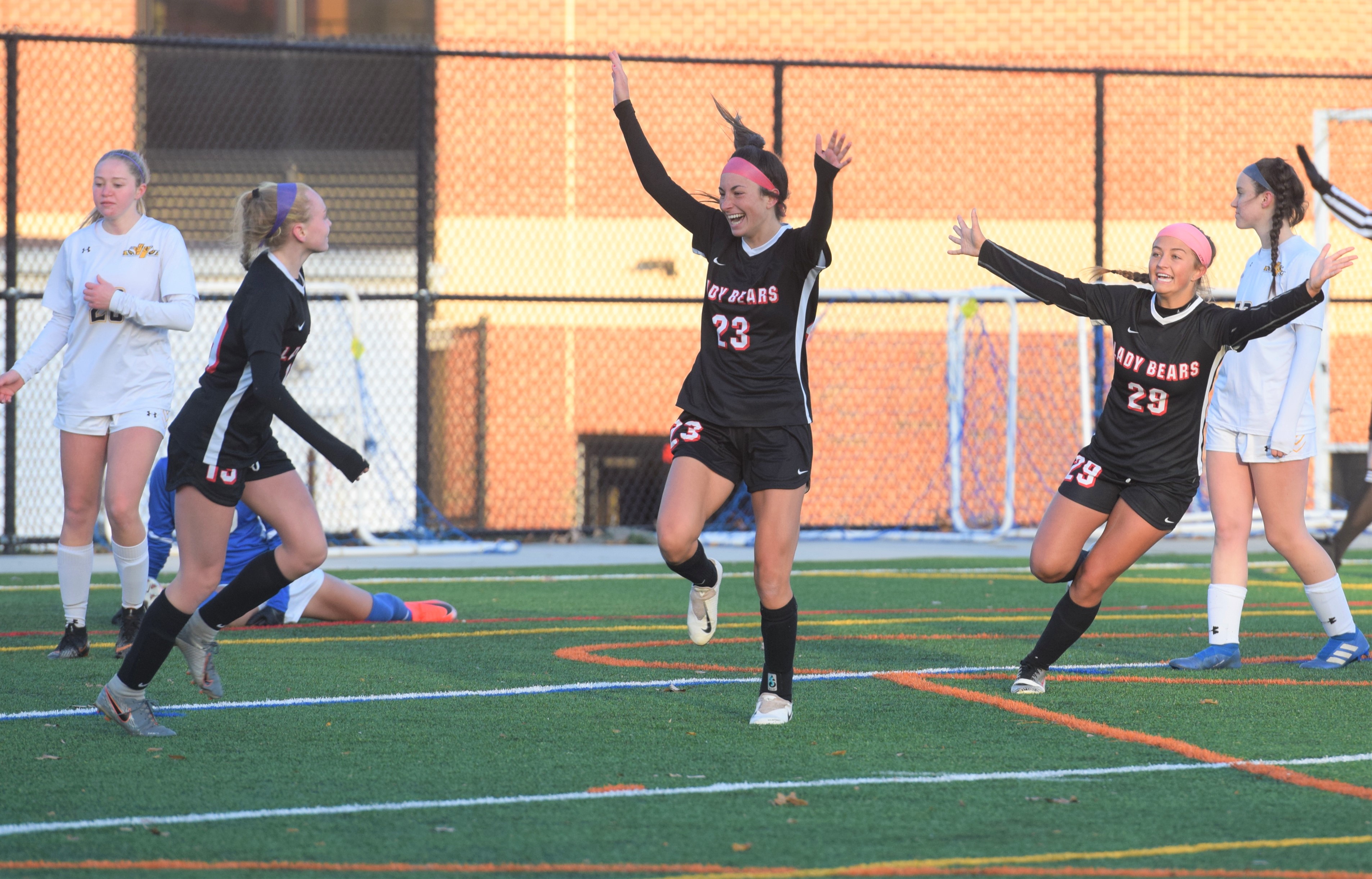 NEW KINGSTON >> After taking on 40 straight minutes of pressure and looking fortunate to reach overtime, the Boyertown girls soccer team should have been down and out. If it was a boxing match, the referees might have called a TKO.

But the Bears were still on their feet and Camilla Kuever was surprisingly confident.

“If we would get into overtime, I don’t know, I had a feeling we would win,” the standout junior midfielder said. “We have Sam.”

With junior forward Samantha Goffice on their side, the Bears had reason to believe.

The belief was rewarded in the 97th minute when Kuever passed to Goffice’s feet with her back toward goal just inside the penalty area and with a spin to her left and a strike with her left the Bears emerged victorious over District 7 champion North Allegheny 3-2 in overtime in a PIAA Class 4A quarterfinal Saturday at Cumberland Valley.

Samantha Devlin, center facing right, is congratulated after scoring a goal in the first half against North Allegheny. (Austin Hertzog – MediaNews Group)

Boyertown (22-2) advanced to face District 3 champion Hempfield – a 1-0 winner over District 10’s McDowell Saturday – in the state semifinals on Tuesday at a site and time to be determined.

The game-winner was Goffice’s second goal of the game after she and freshman Samantha Devlin scored five minutes apart in the middle of the first half to stake Boyertown a 2-1 lead after an own goal forced by North Allegheny’s Ava Ruppersberger gave the Tigers a lead in the 8th minute.
Sarah Schupansky tied the game 2-2 in the 62nd minute, North Allegheny’s reward for a dominant second half.

But in a game between two high-quality sides both worthy of being in the final 8 of the state, the determined play of Boyertown’s leaders won the day.
Senior goalkeeper Mattie Gallagher put on a superb 11-save performance with her back four of Mikayla Moyer, Morgan Kline, Courtney Actis and Emma Elwell playing scrappy defense against one of the best front 6s in the state led by Schupansky (Pitt commit), Emma Bundy (Duquesne commit), Ruppersberger and Hannah Kirkpatrick for the Tigers.

Meanwhile, Kuever put on a tireless and resilient display while being focused on by the North Allegheny midfield.

“I don’t think we’ll ever face a player as good as she is,” Gallagher said of the Bears’ impressive exchange student from Germany. “We’re lucky that she’s on our team. And we’re lucky to call her a friend, too.

“I don’t think I’ll play with someone as talented and hard-working as her.”

Kuever was complemented in the midfield by Maddie Monka, Emma Beidler and Karly Sheahan.

After her stunning two-goal cameo in the Bears’ comeback 2-1 win over Nazareth in the first round, Goffice persevered on a sprained ankle to again lift the Bears.

“She makes a huge difference in our team. She has pain and she still plays through it and fights for the team,” Kuever said. “It’s great to have a player like her.”

North Allegheny was deserving of its 1-0 lead that came via an own goal after Ruppersberger got open on the left side and drove a ball across goal that was deflected off of Moyer and into the near side. The Tigers looked poised to pounce again but Gallagher made her save of the day on a kick save one-versus-one with Bundy to keep it a one-goal game in the 17th minute.

“I’m standing there watching it and I’m thinking, ‘Oh my god, they’re going to score on us.’ And then Mattie saved it and I was like, ‘How did she save that!?’” Goffice said. “I think it pumps up the whole team. We knew with her there’s a sense of security in the back so even if (the defense) gets beat, we know they have to go through her first.”

The lift came five minutes later when Devlin forced a defensive error in the space behind the back line and knocked the ball into an open goal to level it. Less than five minutes later, a poor goal kick went right to Goffice who took two touches and finished for the 2-1 lead.

With the wind and sun now at their back, the Tigers owned the second half while the Bears couldn’t muster a shot. Schupansky’s tying goal was struck well with her left foot from the edge of the area in the 62nd minute and the Tigers looked the likelier winner the rest of regulation.

“But we always find our way back to each other and play as a family.”

The Bears got the wind and sun at their back in overtime and played like it, all leading to Goffice’s game-winner.

Now enjoying the deepest run in program history, it’s all become bigger than just one team’s quest for the Bears.

“We’re such a close team. We play for each other, we play for our community and the community supports us. We came to school today and there were posters everywhere,” Gallagher said.

“It’s so weird to think of ourselves as role models to younger kids because we look up to other people and now they look up to us,” Goffice said. “It’s really cool.”

And deserved too, after a performance worthy of a state semifinalist.