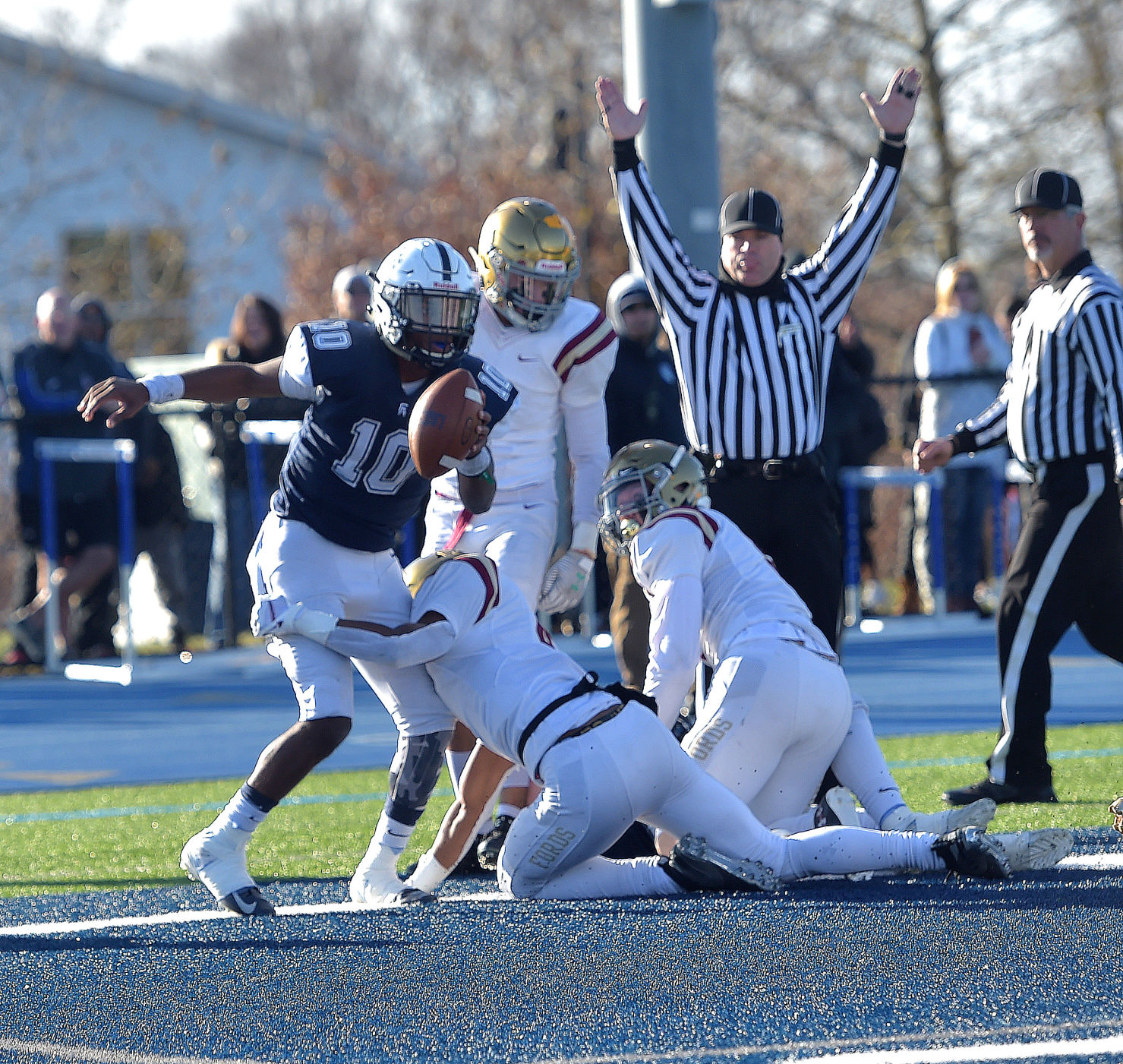 Episcopal quarterback Marcus McDaniel scores his third touchdown of the first half against Haverford School Saturday. McDaniel and the Fords were well on their way to a 38-28 win to clinch the Inter-Ac League title. (Pete Bannan/MediaNews Group)

NEWTOWN SQUARE — It was a thoughtful Maurcus McDaniel who paused before answering a question about the tradition involved in the football rivalry between Episcopal Academy and The Haverford School.

“You wonder what the freshmen, sophomores and juniors might be thinking,” McDaniel said. “You know what it means to you when you are a senior and get to play in this game.”

McDaniel did all he could to make sure that the 110th meeting of the two Inter-Ac League contenders would wind up with the home team celebrating as the sun set over Newbold Smith Field Saturday afternoon.

The amazing senior quarterback carried the ball 24 times for 118 yards and ran for three touchdowns in the first half, was 9-for-12 for 143 yards passing, and came very close to picking off a Fords pass in the end zone as the Churchmen clinched first place in the Inter-Ac by virtue of a 38-28 decision over the Fords (6-4, 3-2).

Junior Malcolm Folk (19 carries, 93 yards) and senior Matt Bush (15 carries, 84 yards) joined McDaniel in getting most of the rushing assignments for EA (9-1, 4-1). Both had a touchdown on the ground in the second half and Folk’s scoring run with 6:02 to play gave Episcopal a 31-14 lead.

Haverford School scored through the air less than a minute later and added its final TD in the last minute of the fourth quarter after a 33-yard Bush run set up his short touchdown carry.

Episcopal had an eight-game winning streak snapped with an overtime loss at Germantown Academy last weekend and spent the week trying to forget it.

“We worked hard all week,” McDaniel said. “We knew we still had to face a very good football team, and we wanted to be as prepared as we could. We had to execute and do our jobs. You realize what the atmosphere is going to be for a game like this. We wanted to move the ball and then do what we could to stop them.”

When the visiting Fords couldn’t move the ball on their first possession, EA needed only five plays to open the scoring. A 12-yard McDaniel to Folk connection put the ball at the Haverford School 22, and on second down McDaniel ran 21 yards to the end zone.

Dante Perri (16-for-27 passing for 304 yards and four touchdowns) found Jake Spencer with a short toss, and Spencer’s ability to break tackles turned the play into a 40-yard TD.

McDaniel engineered another EA scoring drive, with a nine-yard Bush run and a horse-collar tackle making it necessary for McDaniel to run only one yard for his second touchdown.

Brandon Cox recovered a fumble for the home team and McDaniel took his team 79 yards in 14 plays to another score, which he got with a 10-yard run 1:47 before halftime.

Haverford School’s Mekhi Ajose-Williamson, 24, losses a fumble in the second quarter as Episcopal defenders, from left, Brandon Cox, Paul McLaughlin and Bo Aldridge converge on him. The ball was recovered by Episcopal. (Pete Bannan/MediaNews Group)

Max Pasternack’s 22-yard field goal gave the Churchmen a 17-point lead five minutes into the second half, but Perri replied with a 68-yard Haverford School drive that concluded with his eight-yard scoring pass to Chris Sims.

Dom Minicozzi sniffed out a Haverford School third-down play for a three-yard loss, and McDaniel was on his way to a 12-play drive that covered 60 yards and ended with Folk’s five-yard scoring run after a 20-yard completion to Bush.

“Our lines knew we had to play at a high level,” Minicozzi said. “We worked hard to give our offense tough looks at practice so they would be prepared.

“This has been great. It seems like I was just starting playing (varsity) and watching what this game meant to our seniors back then.”

It was only one minute and six seconds after Perri’s 20-yard scoring pass to Matt McKenna that Bush got his fifth carry in a row and scored. The drive began when EA’s Brian Virbitsky fell on a short Fords kickoff.

“This was everything we wanted it to be,” Bush said of winning a championship in his last game in an Episcopal uniform. “It means so much for the seniors, and we were playing for all of those guys who played before us.

“We thought we could run against them, and did what we had to do to make that possible.”

EA head coach Todd Fairlie was happy that his 13 senior players went out on top.

“We knew we had to take care of the ball,” Fairlie said. “If we did that, there were things we knew we could do.”

“We lost our first league game to Springside Chestnut Hill and we could have folded it up right there,” Murphy said. “We battled back and had the chance to win the league title today.

“(EA) is a very good football team. Give them credit. They played a great game today, and we just didn’t play the way we wanted to.”