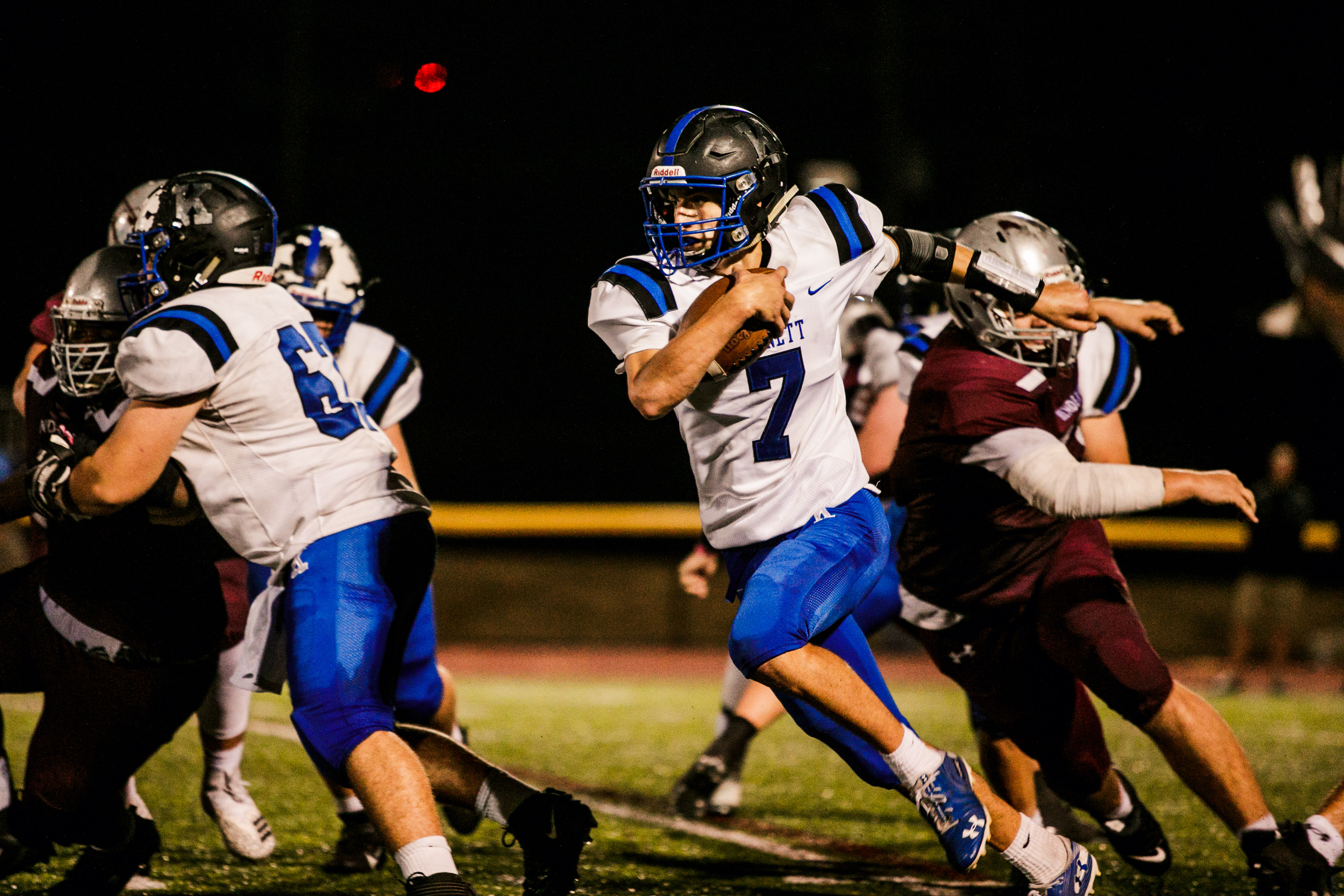 KENNETT SQUARE >> One is a debutante, playing at level previously unattainable. The other, a program with a long list of accomplishments, was looking to reach a height it hasn’t since 2011.

On Kennett’s first posession of overtime, quarterback Sam Forte scampered in from 10 yards out for the winning score to lift fourth-seeded Blue Demons to a 20-14 victory over No. 5 Strath Haven in the quarterfinals of the District 1 Class 5A football playoffs Friday.

The Blue Demons (10-1) advance into the semifinals for the first time in school history, and will travel to top-seeded Cheltenham next Friday.

“This is crazy. This is awesome,” said Forte. “But we’re not satisfied. We want more.”

Strath Haven got the ball first in the extra session and tried to use its wing-T to get the lead. From the 10, John Prochniak and Ibrahim Pio carried the ball three times between them to get to the 1.

On fourth down, Prochniak plowed into the line, and when the mass of humanity untangled, he was determined to be inches short.

“We had our best player with the ball into the line, but we just didn’t get it,” said Strath Haven coach Kevin Clancy.

The Blue Demons, however, celebrated a defensive stop that will be remembered for years to come.

“We were getting gashed up the middle all night,” said Kennett coach Lance Frazier. “I was yelling at our safety Luke Good to pinch, and he stuck his head in, along with three or four others, to make the stop.”

It didn’t take Kennett long to go for the win. Forte rolled right, found some room, then shimmied his way into the end zone to send the players and the chilled home fans into euphoria.

“I ran to the sideline, and cut up and saw green and I got in,” said Forte. “It was just the best feeling.”

The game was expected to be a battle of defenses, but it didn’t start that way. Kennett took the opening kickoff and went 70 yards on just five plays. Consecutive runs of 27 and 21 runs by Garrett Cox and Forte put the Blue Demons in position. Forte then hit Patrissi in the left corner of the end zone for the opening score.

Strath Haven answered right back after Matt Shuler’s kickoff return gave them the ball after the Kennett 44. They methodically marched to the 10 where Prochniak broke free through the middle to tie the game.

Kennett retook the lead as Kalen Frazier made a fingertip catch in the back right corner of the end zone for a 24-yard TD.

Then, the Panthers answered again following another long, sustained march. Prochniak cashed in by bulling in from the three to tie the score at 14-14.

But, just when it looked like it might be an offensive shootout, the defenses rose up and shut the door. The two teams combined for four straight turnovers — three Panthers fumbles and a Kennett interception — between late in the second and mid third quarters.

“The turnovers were big,” said Clancy. “They were as good as advertised. We knew we had to stop Cox and Forte, they’re good players. But, this doesn’t diminish what our guys did during the season, I’m proud of them.”

Late in the fourth, Strath Haven set off on a game-winning drive, but it almost ended before it began. Jack Ryder was hit trying to pass and appeared to fumble as Kennett fell on the loose ball, but it was called an incomplete pass and the drive lived on.

The Panthers eventually got the ball to the Kennett 24, but Emmet Young’s 41-yard field goal fell short on the next-to-last play of regulation.

Kennett now continues its dream season, and Frazier refuses to accept all of the credit for the turnaround.

“This is not just personal,” he said. “The staff deserves the credit and the collective support of the students, the administration and the community. This is a celebration for them.”