Coatesville runs past Central Bucks West in District 1-6A quarterfinals 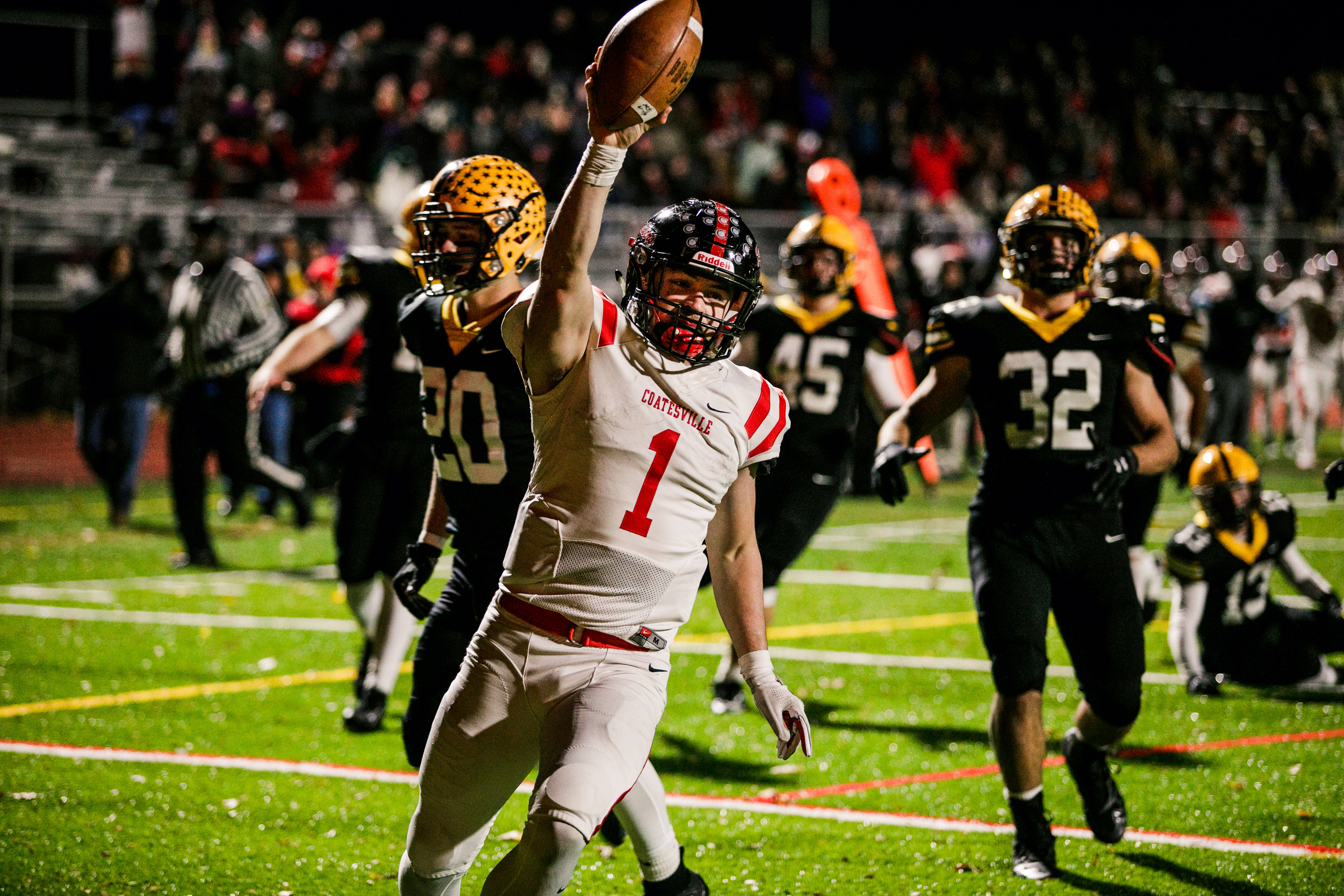 DOYLESTOWN >> Coatesville felt there was room to roam.

“The last couple weeks, it felt like teams were begging us to run the football,” Red Raiders coach Matt Ortega said. “That’s what happened tonight. And hopefully that’s gonna make us a tough team to beat in the future. We’re really excited to get that running game going to complement the passing game.”

Coatesville ran away to a commanding victory in the District 1-6A Quarterfinals, rallying past Central Bucks West 41-24 to go marching onto the semis.

“The past three weeks, we passed for over 300 yards,” quarterback Ricky Ortega said. “We had to have games where we could rush too. We had to pound the ball and show them we can do that too.”

Coatesville’s Dapree Bryant looks back during a 69-yard touchdown run in the third quarter. (Nate Heckenberger – For MediaNews Group)

“That’s gonna be big for us too because other teams can’t just key on me,” Ricky Ortega said of Bryant. “You put him in the backfield and that opens up things. They’re gonna crowd the box and that can open up long passes.”

West led 7-0 early, on a three-yard run by Josh Jackson.

But then the third quarter belonged to No. 10 Coatesville.

The Red Raiders scored on back-to-back possessions, as Ricky Ortega sprinted in from 14 yards on a draw and Bryant ran for a 69-yard TD out of the Wildcat to push the Red Raiders into a 27-17 lead.

With its defense getting much more penetration in the second half, shutting West out in the third quarter and for much of the fourth, the Red Raider offense put the game out of reach.

Ricky Ortega audibled to a deep shot along the left sideline, hitting Artie Burgess – who had beat single coverage – in stride for a 34-17 cushion. Ruttman’s 22-yard score further padded the lead.

“They’re a very good football team,” Bucks coach Rob Rowan said. “(Bryant and Ortega) are great players and they’re in a system that supports those two.”

Plenty to be proud Of

The No. 2 Bucks saw their season come to a close, but it was a remarkable season at that, with 10 wins against just two losses.

“Immensely proud of them,” Rowan said. “We were down to dressing 33 guys for the past four weeks. They re-established the standard of what’s acceptable here moving forward.”

Jack Fallon rushed for 179 yards and quarterback Jack Neri had 18 yards and two TD’s. He also threw for 110 yards.

“They’re a great program,” Matt Ortega said. “They have good kids and a good coach. Our kids came out in the second half, we made the adjustments, we got the stops and our offense made it happen.”

Said Matt Ortega of moving forward, with a game at Garnet Valley next week: “We’re gonna come in week in and week out trying to defend that district title.”