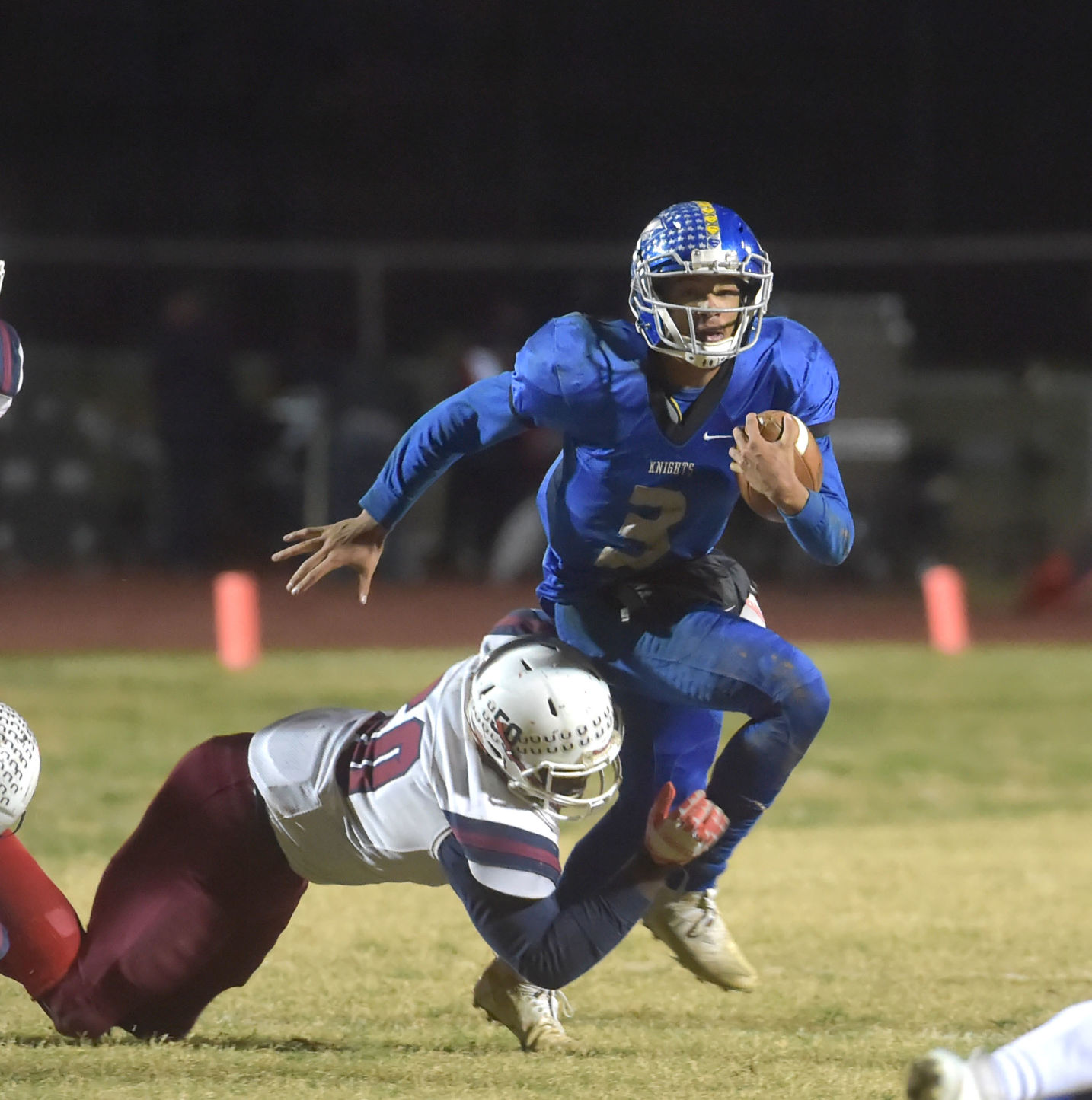 Academy Park's Barry Brown runs for a first down in the fourth quarter to help nail down the Knights' 8-6 victory over Penn Wood in a District 1 Class 5A quarterfinal playoff game Friday evening at Knight Park. (PETE BANNAN - MEDIANEWS GROUP)

SHARON HILL — Nothing could have prepared Barry Brown for the news he received earlier this week.

Many of the Academy Park football players, notably the senior class, were friends or acquaintances with Aasiyah Bey, who lost her long battle with cancer on the eve of AP’s District 1 Class 5A quarterfinal game with Penn Wood.

Brown, the Knights’ starting quarterback, had forged a friendship with Bey that began in grade school.

Fighting tears, Brown talked about his departed friend after Academy Park edged Penn Wood, 8-6, Friday at Knight Park. The third-seeded Knights will host No. 7 West Chester Rustin in next week’s semifinal round.

“We tried to use it as motivation, to remember Aasiyah,” Brown said. “She was like a sister to me. Since we were in fifth grade, her and her brother and me were always together; we grew up together.”

AP’s best win of the season was its toughest for a variety of reasons. The offenses were dreadful, but the defenses came to play. There were too many penalties and the game, at times, moved at a snail’s pace.

Brown knew he had to keep things together. He had a team to lead and despite the adversity, both on and off the field, he succeeded. Playing in memory of Aasiyah spurred Brown and the Knights to victory.

“She fought to live, every day,” Brown said. “She fought cancer three times and won twice.”

Bey was a member of the Del Val League champion girls tennis team and participated in the District 1 Doubles Tournament in 2018.

“This whole game was about her,” junior lineman Isaiah Rogers said. “I didn’t know her as well as (Brown), but my heart goes out to her and her family.”

AP’s only touchdown came on its first offensive snap following a botched punt attempt by Penn Wood. With the ball at the 1-yard line, Brown received the snap out of the shotgun and plunged across the goal line. He connected with Malik Johnson on the two-point conversion pass to give the Knights an 8-0 lead, just 69 seconds into regulation.

A fumble by AP’s Eric Willis, who was pressed into duty at running back due to several injuries, was recovered by Penn Wood defensive back Elijah Gleplay, who sprinted 50 yards to the end zone with five minutes left in the first quarter. The Patriots (7-4) failed to convert the two-point play and, wouldn’t you know, neither team would sniff the end zone the rest of the way.

“I love this team, man,” Brown said. “There’s nothing I wouldn’t do for them.”

Brown made a few spectacular plays with his feet and connected with Eric Willis on three passes for 73 yards. He added 64 yards rushing on 20 carries.

But the real story was the defensive performance of the Knights and Patriots, both traded blows all night. AP’s defensive front dominated, especially linemen Rogers, Xavier Newman and Skylar White, who made life extremely difficult for All-Delco quarterback Desman Johnson (5-for-17, 59 yards, two interceptions). Johnson was sacked twice and flushed out of the pocket on multiple occasions. In the teams’ regular-season meeting, a 21-6 Academy Park win, Johnson was able to use his feet to extend Penn Wood drives and keep his team alive. That was not the case Friday night.

“We wanted to keep him scared, keep him scrambling and keep him inside,” Rogers said. “We tried to eliminate the big play.”

Penn Wood had a prime chance to go in front in the fourth quarter, but penalties and ineffectiveness set the Patriots back … over and over again. A second-and-three at the Academy Park 47-yard line became a third-and-seven and then a fourth-and-forever.

Johnson, who received little help from his wide receivers, could do nothing but throw Hail Marys or hold onto the ball for too long. Jordin Jones had 33 yards on five carries and Malik Brooks made three receptions for 22 yards. AP’s defense held the Patriots to a paltry 90 yards of offense. Penn Wood racked up 152 yards in penalties.

“We changed some things on the defense, to keep us fluent and to give some different looks,” Rogers said. “We made some adjustments that worked to our benefit.”

Academy Park struggled to move the ball without its leading rusher, Devon Covert, and top wide receiver Alphonso Hayes, who were two of several starters missing in action due to injuries..

“It’s mostly ankles, shins, or both … things like that. We hope to get them back, but I don’t know,” coach Jason Vosheski said.

Brown and the Knights will keep playing, both to honor their classmate and friend, Aasiyah, and to win a district title for the first time since 2016. Next week they look to get revenge on Rustin, which eliminated the Knights in last year’s quarterfinal round.

“They took us out last year and we’re coming to take them out this year,” Brown said.