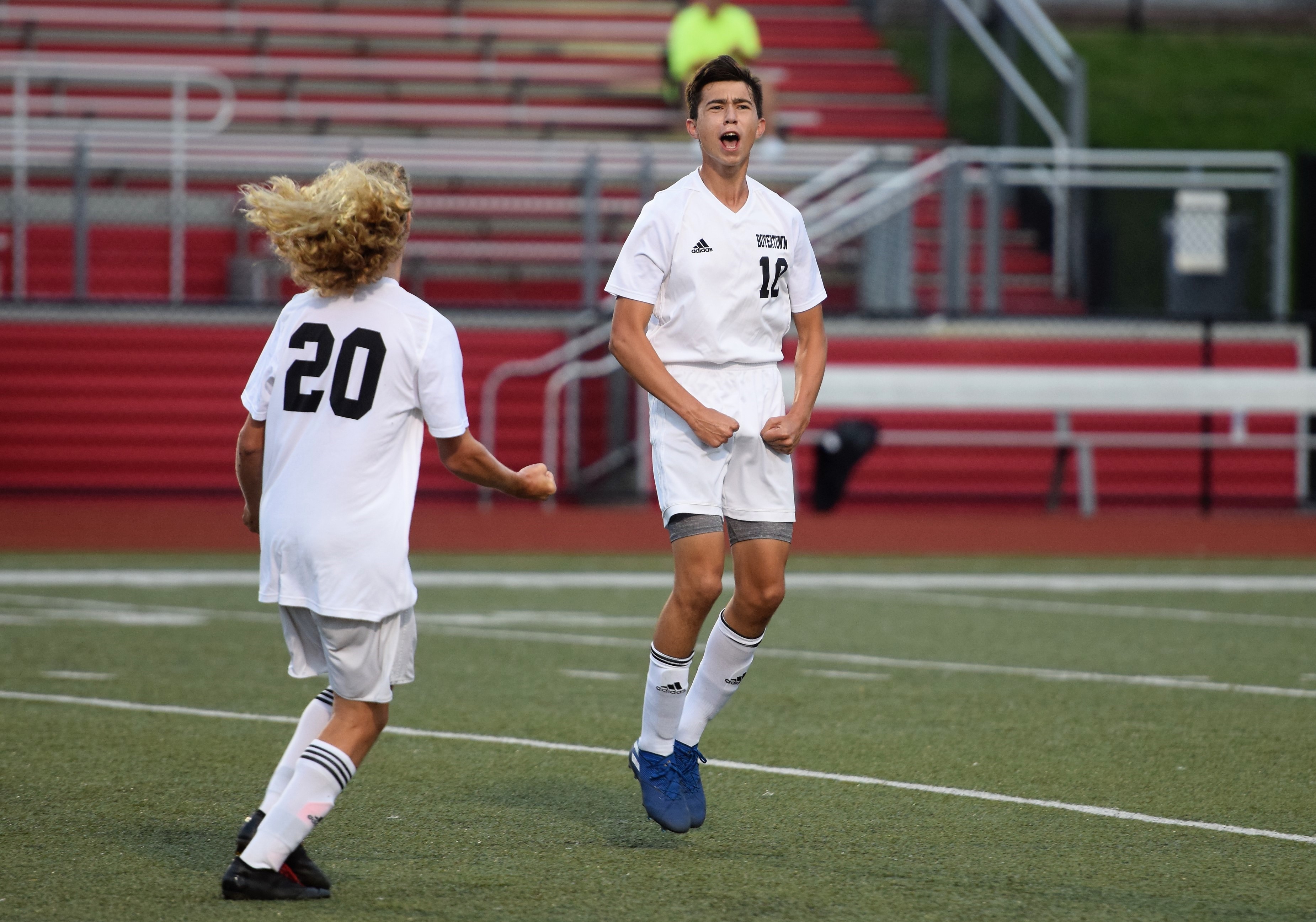 BERNVILLE >> The Boyertown boys soccer team took another step further than any other in program history Saturday afternoon with a 3-0 win over Palmyra in a PIAA Class 4A quarterfinal at Tulpehocken High School.

Dimitri Randjelovic had a goal and an assist and Beckett Wenger and Matt Selders also scored for the Bears (22-2-2), who had never even won a District 1 contest before this season. Boyertown will face Central Bucks West, a 1-0 winner over Mt. Lebanon, in a Tuesday state semifinal at a time and place to be determined.

“These kids are doing well for themselves,” said Boyertown coach Mark Chambers. “You can’t beat being one of four teams left.”

“It feels amazing,” said Randjelovic. “Such team effort out there.”

The District 1 runner-up Bears got on the board four minutes into the match when Nick Willson crossed a pass to Randjelovic for a medium-range blast into the left corner.

Palmyra (18-3-2), the fourth-place team from District 3, possessed the ball in the midfield much of the rest of the half, but Bear goalkeeper Mason Kurtz (9 saves) made four steps to maintain the slim margin.

“I think the first half was book-ended by decent play,” Chambers said of his team’s effort. “They (the Cougars) possessed through the midfield. We told them to just keep your shape, maintain your marks.”

The Bears scored again eight minutes into the second half when Randjelovic pushed a pass to Beckett Wenger for a spinning shot and score.

The Cougars had a chance to get close midway through the second half when Joshua Mark found open space near the top of the box for a hard shot, but Kurtz was right there to make the save. Palmyra had another good opportunity not too long after that when a shot that was just wide to the left of the goal was deflected over the goal line. But Kurtz came through with another save on a shot by Nick Carroll.

The Bears wrapped it up when Selders scored off a pass from Landon Wenger with 9:41 to go.

“We possessed pretty well,” said Randjelovic, who nearly scored again on a shot that ricocheted off the right post and crossbar. “Getting it to Nick (Willson), who created a lot of chances.”

“We got back to how we wanted to play,” said Chambers. “Possession in the midfield, get dangerous up front. We definitely created some chances today. Palmyra is a very good team.”

Palmyra had the only two corner kicks on the afternoon and put more shots on goal than the Bears. But most of those tries by the Cougars were handled easily by Kurtz.

Next, the Bears will face a CB West team that finished fifth in District 1, losing 2-1 in the quarterfinals to Lower Merion, which then fell 1-0 to Boyertown in the semifinals.

“Every game in the playoffs is a big game for us,” Chambers added. “We talked about it in practice. We treat them just like any other game.”