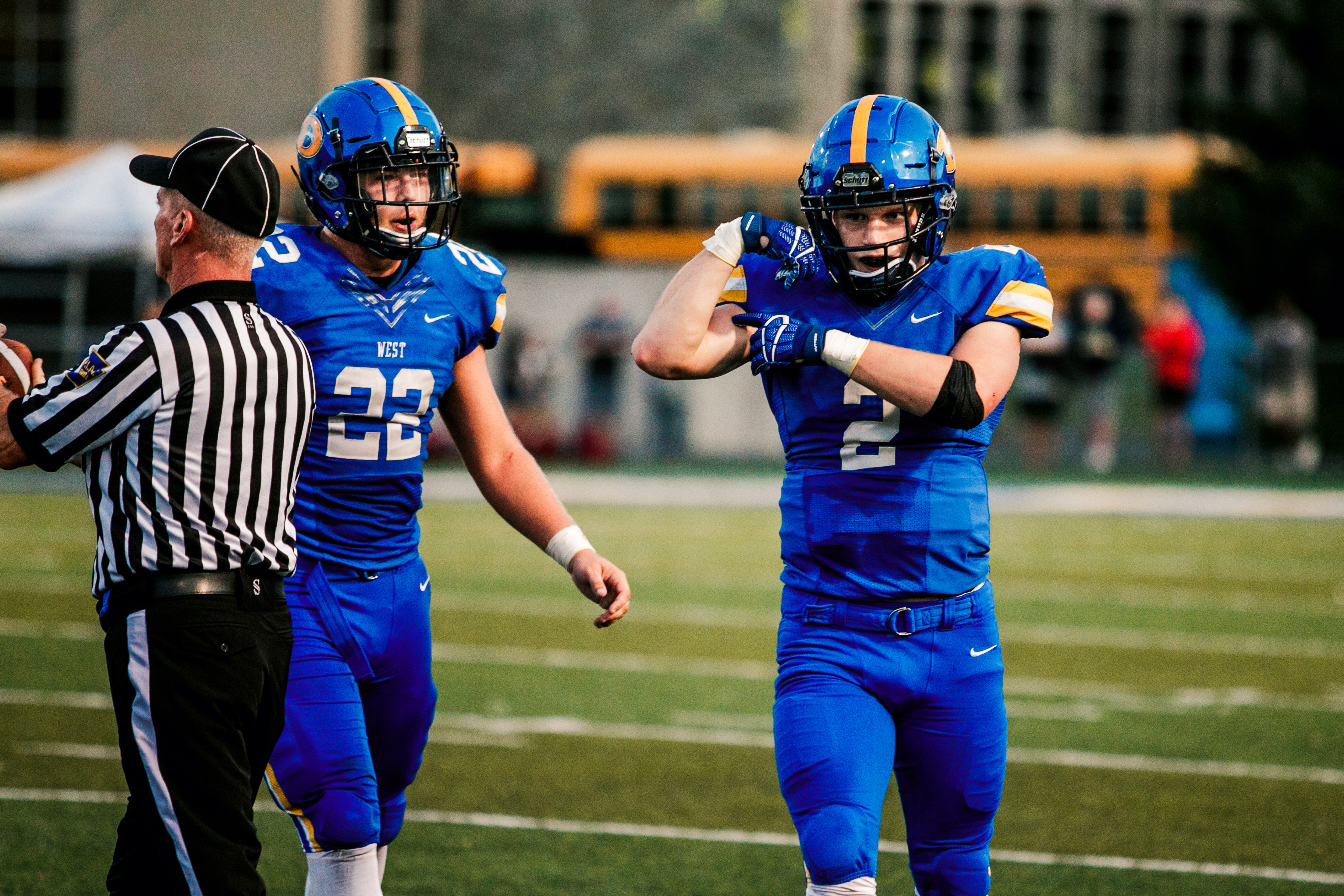 Bad weather prevented Hale from making the trek from snowy Bloomsburg to attend Friday’s District 1 6A Quarterfinal clash at Downingtown West, but his considerable influence permeated the proceedings at Kottmeyer Stadium, which ended with the Whippets prevailing 40-31.

Whippets’ receivers coach, Bill Hess, played for Hale at West Chester University. Steve Mitten and Mike Hancock are defensive assistants on head coach Mike Milano’s staff. They are, respectively, the son and grandson of Bob Mitten, who was the head coach at WCU when Hale was a star defensive end in the 1960s.

Lots of connections — and it’s not just with the home team. On the opposite side of the field, North Penn coach Dick Beck was recruited by Hale and wound up playing football at Temple with Hale’s son Roman.

The most obvious association, however, was wearing No. 6 for Downingtown West: Hale’s grandson Maximus (Max) Hale. A senior, he is an All-Ches-Mont defensive lineman for the Whippets, who improve to 11-1 and advance to the district quarterfinals to take on either archrival Downingtown East or Haverford.

“Our goal at the beginning of the season was be the best Downingtown West team ever, and now we are one win away,” Max said.

On Friday, just like he’s done all season, Hale was a two-way contributor registering nine tackles (five solo), chipped in three runs for 17 yards and was often the lead blocker for tailback Tariq Lewis, who scored four touchdowns on runs of 50-, 40-, 23- and 18-yards.

“Max is tough, but he’s controlled,” said Danny, 72, in a phone interview. “He’s like me — I used to love blindsiding quarterbacks. But the game’s changed today. I would definitely be getting some flags out there.

“He’s got a special talent – a God-given gift – and he is making the most of it.”

Just like his grandfather, Max stars at the defensive end position. He was moved there from linebacker just before his junior seasons due to an injury situation, and has been there ever since.

“He just fell in love with it,” Danny said.

“There is just a lot more action on the line and I don’t like pass coverage much,” Max added. “I like getting to hit someone every play.”

The fifth of 11 kids to parents Roman and Jen, Max is one of Danny’s 18 grandchildren. When Hale retired in 2012, one of the main reasons he cited was to be able to see more of his grandkids.

“I have 10 siblings and seven other cousins,” Max said. “It’s crazy how much stuff he gets to. He’ll drive four hours a night just to make one of our games and get back to his house. He is definitely committed to his grandkids.”

One grandson is a wrestler at Bloomsburg, several granddaughters are into field hockey, there is Max with football and wrestling, and then there are a slew of younger ones who Danny calls ‘rug rats,’ who sure look like they are headed toward athletics.

“I am very blessed with all of my grandchildren,” he said.

“This is my seventh year away from coaching and we’re at 21 grandchildren and great-grandchildren. And it seems like they are all involved in something, other than the newborns.”

Despite all of the successes in football, Max says he is a wrestler at heart. He was the runner-up at states at 170-pounds last spring, going 41-3. He recently verbally committed to attend Penn, where he will wrestle.

At 6-foot, 190-pounds, he is a bit undersized for a defensive end, but he makes up for it with a motor that never stops and the kind of toughness and relentlessness that you would expect from a Hale. Danny calls it ‘quicks and toughs.’

When asked if he sees a bit of himself in Max, Danny said: “I do. He is quick and he can bring it. But I want to see him use his hands a little more with the way some of those big linemen grab him.”

“I’ll go up to Bloomsburg with him and there will be a bunch of people come up and talk to him,” Max recalled. “We’ll go to a Dunkin’ Donuts and three guys will approach him.

“We’ve been up to some Bloomsburg games and his name is on the stadium. You see that and you think, ‘that’s pretty cool.’”

Always a football coach, Danny wants to help Max anyway he can, but he doesn’t want to overstep his bounds.

“He doesn’t get into it too much but he will definitely give me some tips,” Max said. “And when you have a legend as a grandfather, it’s hard not to ask him questions.”

Danny acknowledges that he consciously holds back but still gets a few ‘subtleties’ in. He picks his spots.

“You don’t want to be that grandfather who picks apart everything,” he said. “When I can, I chose my words well with Max. But I don’t criticize. I will say something to Roman, ‘mention this here if you get a chance.’

“I am very proud of Max and I am excited for him.”