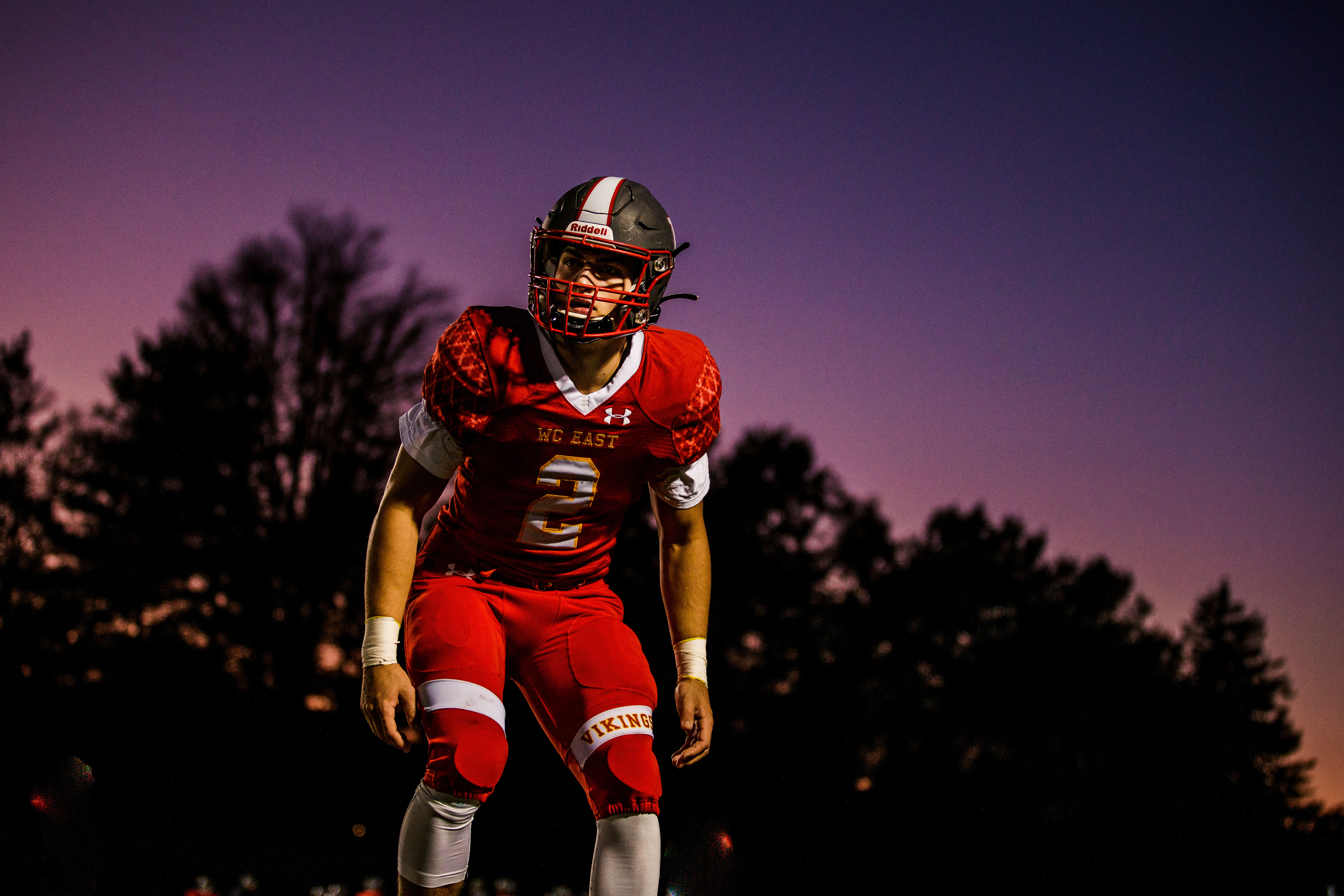 Some of the best memories of West Chester East football reside in the minds of those in West Chester Rustin’s coaching room.

Carroll’s last year was 2006, after another Vikings’ league title led by Fred Maldonado, but across town, Rustin got its start, led by St. Clair, who got his first shot as a head coach. Timko joined in 2008 as offensive line coach.

Rustin becoming the third high school in the West Chester district surely had an adverse affect on East, thinning out the talent. For a decade after the ’06 run, the Vikings missed the playoffs, while Rustin thrived, winning a district title and becoming a postseason mainstay.

Now, though, East has won two straight after losing the previous 10 matchups against Rustin, and for the first time ever, both teams advanced to the second round and will meet in the District 1-5A playoffs.

Three weeks ago East defeated Rustin, 27-7, to clinch the Ches-Mont American Division title, with the Vikings (9-2) holding the Golden Knights (8-3) to 129 yards.

The Vikings will look to do much of the same, feeding their star running back, Kyle Cichanowsky, who went over 2,000 yards for the season last week. Joey Wileczek, who missed the first contest, is back to share some of the load while averaging 10.9 yards per carry this season.

Both teams were very businesslike last week, with No. 2 East discarding West Chester Henderson, 38-6, and No. 7 Rustin overcoming Upper Dublin, 23-0.

The Knights, who average 262.1 rush yards a game, have to find a way to move the chains and hit on a couple play action passes (they had zero passing yards the first game), to keep East honest.

Here is a look at the other six local contests:

Why the Whippets can win: Last week’s come-from-behind win over Pennsbury was further proof of what we’ve learned about the Whippets this season: they are resilient and they make great halftime adjustments. West has played six 6A playoff teams (Garnet Valley, Central Bucks South, Perkiomen Valley, Downingtown East, Coatesville and Pennsbury) this season, and had close first quarters against all of them. The average score for the Whippets after one was 8-7.5, in favor of West. The average halftime score was 16.8-13, West. West went 5-1 in those games by an average outcome of 42.5-24.7, and even in its loss to Coatesville, West scored twice in the third to erase a 13-point deficit. The moral of the story? Score early and score often against the Whippets, because they are going to get their points sooner or later.

Why the Knights can win: History is on North Penn’s side. Since Dick Beck became head coach in 2002, North Penn is 7-0 against Downingtown team in the postseason. His team has beaten Downingtown once, East three times and West three times. The most recent result was last fall when the Knights knocked West out in the semifinals at Kottmeyer Stadium. North Penn always reloads and becomes more formidable by playoff time, and after a rare two-game losing streak during league play last month, the Knights racked up over 400 yards on the ground last week against CB South. Seeing Pennsbury carve up West’s defense on the ground last week will have North Penn believing it can do the same.

Why the Cougars can win: They won by four touchdowns a week ago and didn’t play their best game, likely eliminating any chance of sniffing themselves. Junior running back Stanley Bryant is emerging as a star, running for 426 yards and six touchdowns the last two weeks. With Spencer Uggla out, Bryant has been up to the task. Haverford has not played as physical as an offensive line as East’s, maybe all season, but at least not since Garnet Valley in week two. The Cougars have gone three games without turning the ball over and are now plus-nine in turnover ratio on the season.

Why the Fords can win: As everyone in Delco, as well as Spring-Ford, know, the answer here is Trey Blair. The Buffalo commit does it all for the Fords. He leads Delco in rushing, as a quarterback, with 1,574 yards and 20 TDs and doubles as defensive back who picked off his school record 13th career pass last week. Haverford started the season 0-2, but has won nine straight. The Fords have outscored opponents 372-58 during that win streak. Haverford is hot and if the game stays tight, Blair just might be the biggest difference-maker on the field.

Why the Red Raiders can win: Coatesville’s athleticism is something CB West hasn’t seen this season, and if you put any stock in the common opponent formula, the Bucks lost, in the regular season, to a Souderton team that the Raiders beat 49-18 last week. Quarterback Ricky Ortega went over 12,000 yards of offense for his career, passing and rushing, and his 6.7 yards per carry last week was his highest since week five. If he’s getting healthier and more agile, it’s only going to make it harder to stop a team who scored seven TDs in just under nine minutes of game time last week.

Why the Bucks can win: They are big up front and will try to use their wing-T offense to dictate tempo and keep Coatesville’s offense off the field. Physical, grinding play is the formula for beating Coatesville, but it’s a matter of doing it for 48 minutes, because the Raiders are going to score. For as underwhelming as CB West’s loss to Souderton looks, its win over North Penn is a good one. The Bucks forced three fumbles in that game and aggressively look for the strip. Coatesville is minus-two in turnovers in its two losses and plus-six in its eight wins.

Why the Blue Demons can win: Kennett hasn’t given up a touchdown in 15 quarters of football. That’s a pretty good recipe for success. On their four-game win streak, the Blue Demons have forced 12 turnovers, while giving up only four. Strath Haven is as run-centered a team as you will find, and that plays into the strength of Kennett, who gives up just 108.4 rush yards per game. Having QB Sam Forte and running back Garrett Cox gives Kennett diversity on offense, which could be the difference between two hard-nosed squads.

Why the Panthers can win: Their styles are a little different, but Kennett and Strath Haven win by doing the same things — run the ball and defend. The Panthers didn’t blow the doors off of 5-5 Upper Merion last week, but they were also in no danger of losing with their defensive prowess. Against the best two defenses the Blue Demons faced this year, West Chester East and West Chester Rustin, they scored 26 total points. One would suspect Strath Haven can keep it a low-scoring battle and let longtime coach Kevin Clancey work his magic late.

Why the Indians can win: This is what Unionville is built for. The Indians are 4-1 in road playoff games since 2017, including a dominant 28-10 win over Marple Newtown last week. Run games and defense always travel well, and running back Connor Schilling has 404 rush yards and nine TDs the last two weeks. Unionville hasn’t turned the ball over during its current three-game win streak and has created seven turnovers in that stretch. Cheltenham has not been tested like Unionville has this season. The Panthers’ lone loss was to Abington, a first-round loser in 6A, and its best win was over Plymouth Whitemarsh, who beat Abington last week.

Why the Panthers can win: Just because they seems like somewhat of an unknown outside of Montgomery County, doesn’t mean the Panthers aren’t formidable. Much of the core that knocked off WC East in the first round last year is back. Cheltenham has some size up front and athletes at the skill positions. It will be difficult for Unionville to keep them contained. The Indians struggled against teams — WC East, Kennett, Coatesville, Rustin — that had superior athleticism.

Why the Eagles can win: The District 1-4A title is on the line for Shanahan, and appears to be ripe for the taking. The Eagles scored a season-high 56 points last year, good for about one-fifth of their total points this season. Quarterback Cooper Jordan and running back Brandon Choi are hitting their strides in their first year of starting. Upper Moreland doesn’t score a lot (20.2 points per game) and give up almost as much (17.2), and the Golden Bears were the only win for Sun Valley this fall.

Why the Golden Bears can win: After losing three straight games to end the regular season, Upper Moreland righted the ship last week with a convincing win over Springfield (Montco). The Bears, like Shanahan, is young at the skill positions, but sophomore QB Byron Hopkins ran for a season-high 156 yards and three TDs last week.