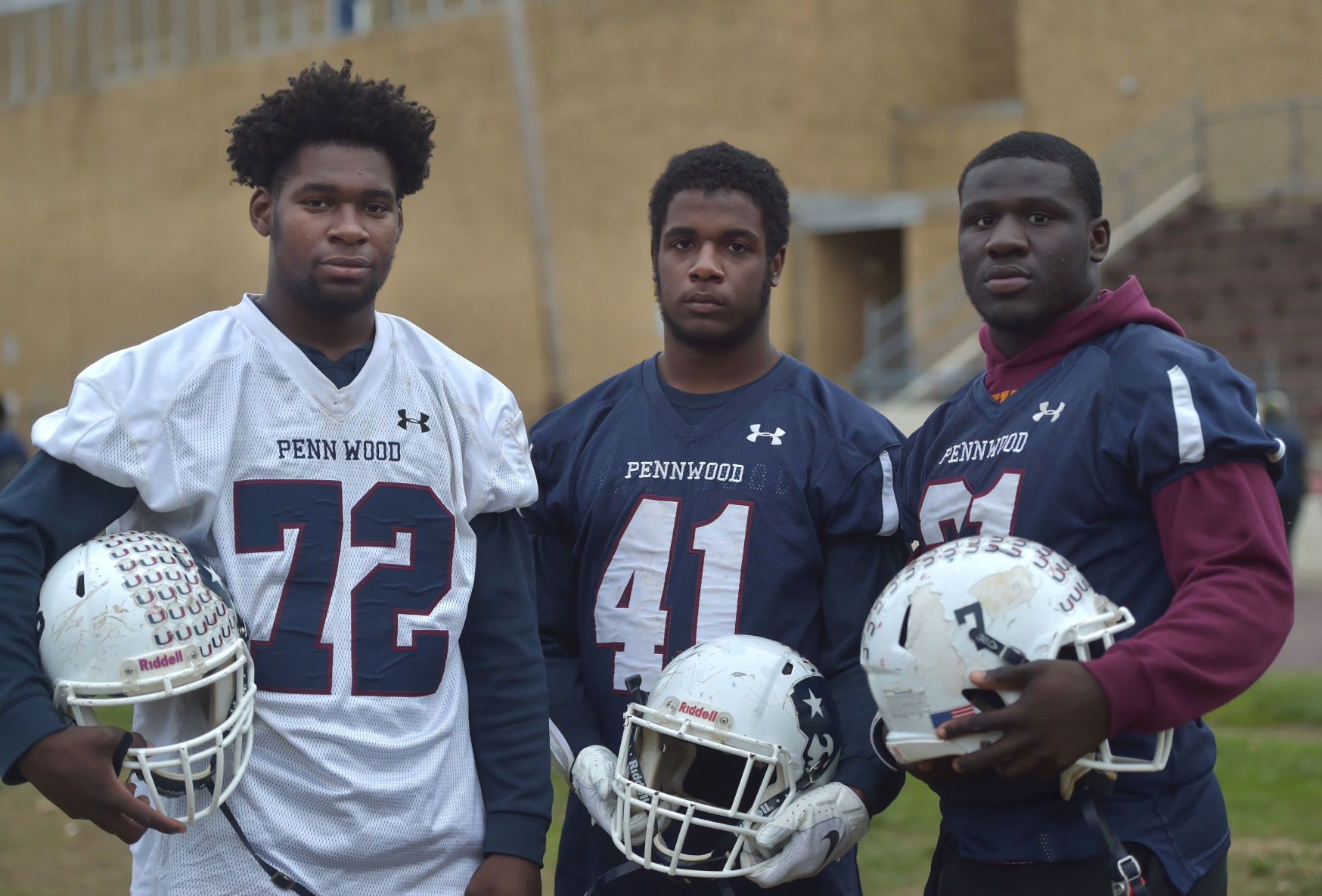 Penn Wood's leaders on defense — from left Jacquez Mabin, Christian Suber and Rob Dahn — are looking to avenge a regular-season loss when they travel to Academy Park Friday in the second round of the District 1 Class 5A playoffs. (PETE BANNAN — MEDIANEWS GROUP)

One year after a surprise loss to West Chester Rustin in the District 1 Class 5A semifinals, the Patriots have unfinished business in 2019.

But first they must conquer Academy Park in the quarterfinal round Friday night in a meeting of Del Val League co-champions. Kickoff is 7 p.m. at Knight Park.

“I don’t want to be average, I don’t want to go home early,” Mabin said. “We just have to execute and we have to dominate on both sides of the ball.”

Senior linebacker Rob Dahn knows the Patriots have to bring the intensity and play smart football, which they struggled to accomplish the first time around against AP, a 21-6 Knights win.

“In practice we are more physical and we communicate really well, and I feel as though that’s going to carry over into the game,” Dahn said. “We have to know our assignments, know where to line up and know where to attack. We have to be more disciplined … and we can’t jump offsides and give them better opportunities.”

The Patriots (7-3) know all too well about AP’s high-powered offense, led by athletic senior quarterback Barry Brown, who completed 8 of 13 passes for 175 yards and two touchdowns in the Knights’ 26-0 win over Oxford last week. Brown also had a 30-yard scoring run and finished with 77 yards on 16 carries. He is one of three quarterbacks in Delco this season with more than 1,000 yards passing and running.

“I feel like if we can stop him, they can’t do anything,” senior lineman Christian Suber said. “We know he’s their best guy.”

“It will take away a lot if we can stop him,” Dahn added. “He sets up their run game and their pass game.”

The Knights (9-2) won in convincing fashion despite an uneven performance on offense, which can be attributed to the solid effort of Dahn, Mabin, Suber and the stingy Penn Wood defense. The Patriots limited AP’s offense to 33 yards and zero first downs in the first half. In the second half, though, the Knights took control at the line of scrimmage, running the ball 20 times for 94 yards.

“We can’t make the same mistakes again,” Mabin said. “We just got to be better. We can’t let (Brown) get any running room and we have to collapse the pocket as best as we can.”

The winner of No. 6 Penn Wood and No. 3 Academy Park plays either No. 2 West Chester East or seventh-seeded Rustin in the semifinals.

“We want to play Rustin again, get our revenge, but we have to (beat) Academy Park first,” Mabin said. “That’s all that matters to us now.”

In another Class 5A quarterfinal:

The Panthers (9-2) scored all of their points in the final quarter to defeat No. 12 Upper Merion, 21-6. John Prochniak ran for 152 yards and flourished at linebacker alongside his brother, Aiden. Quarterback Jack Ryder ran for two scores and threw a 21-yard touchdown pass to Jaris Adams.

The Blue Demons (10-1) earned their first District 1 playoff win in program history with a 31-0 rout of 13th-seeded Chichester. Quarterback Sam Forte was 7-for-13 for 136 yards and a touchdown, while adding 81 yards on 11 carries. Garrett Cox is the second-leading rusher in Chester County with 1,518 yards and 20 TDs.

The Colonials (9-1) enjoyed their first district playoff victory in 20 years with a 56-42 upset of No. 6 Abington. Like Garnet Valley, the Colonials operate out of a run-first offense. Senior running back Brian Dresin stole the show with 312 yards on the ground.

Defensively, the Fords have allowed only 130 yards per game during the course of the nine-game winning streak and have held opponents to 58 total points. A

But D-East is no ordinary opponent. Stanley Bryant ran for 256 yards and N.J. Cogliati amassed 176 yards in East’s 55-27 rout of Perkiomen Valley. Junior tackle Caelan Krasley (6-3, 300) is a standout on the offensive line for the Cougars, who are averaging 35 points a game.

The Fords and Cougars play Saturday night at Kottmeyer Stadium.

AROUND THE COUNTY >> Archbishop Carroll (6-5) and Bonner-Prendergast meet Saturday at Cardinal O’Hara in the District 12 Class 4A semifinals. Kickoff is noon. The winner will play either Imhotep Charter or Bartram at a neutral site next week… Haverford School (7-3) and Episcopal Academy (8-1) play for the Inter-Ac League championship Saturday. Kickoff is 2 p.m. at Smith Field. The Churchmen haven’t won the title since 2012 and the Fords are looking to win the crown for the first time since 2015.