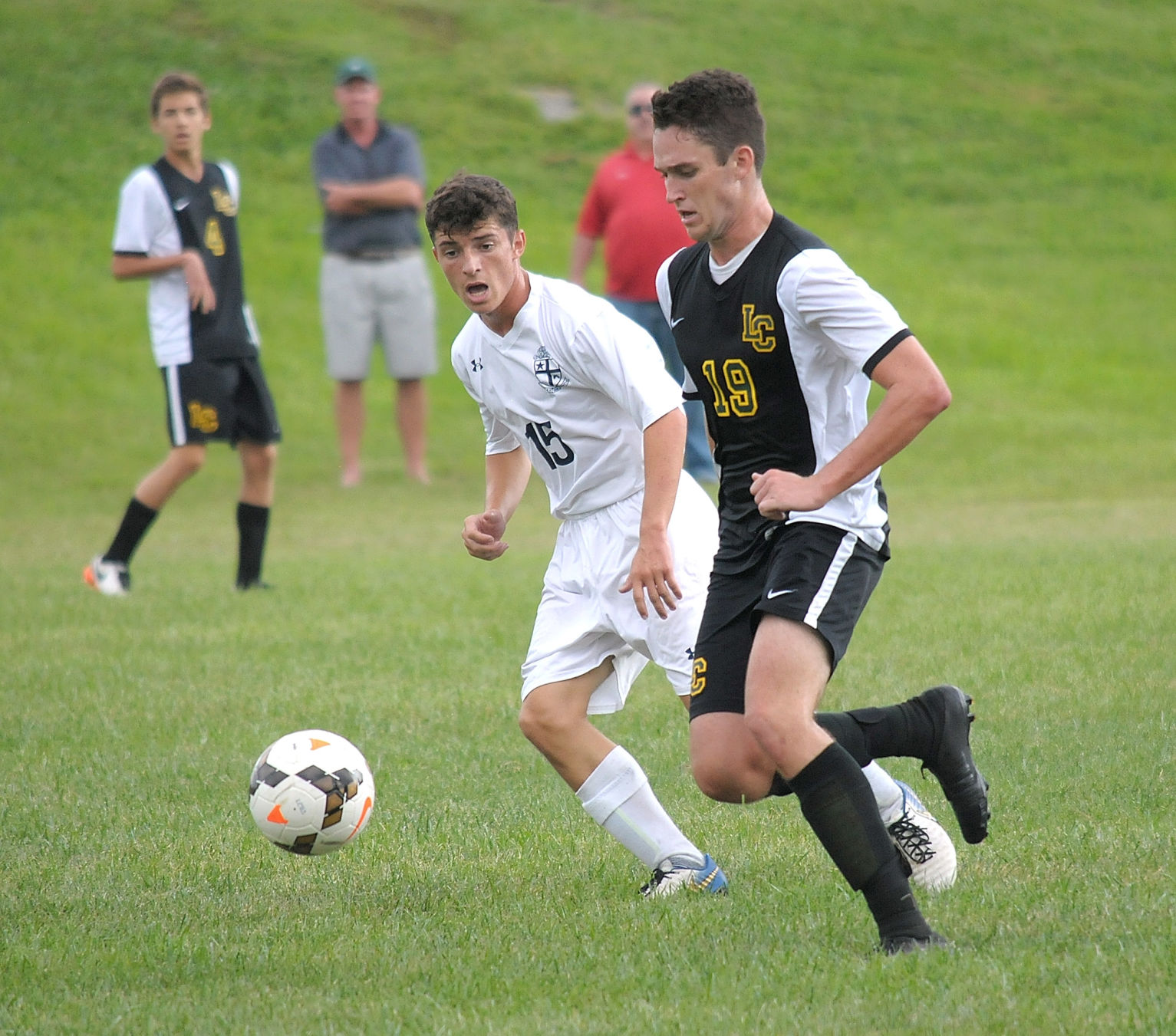 MARPLE >> The third time is the charm.

First, it was beating New Hope-Solebury in the District 1/12 2A final for the first time in three tries. That needed a shootout from the penalty spot to decide.

Then, it was beating state playoff nemesis Lancaster Mennonite for the first time in three tries. That needed a shootout from the penalty spot to decide.

While Lansdale Catholic’s boys soccer team doesn’t have a second round jinx to break in a third try this weekend, they’re just happy they can think about playing this weekend after picking up a hard-earned victory over the Blazers with a 4-3 shootout win following a 1-1 double overtime draw in Tuesday’s Class 2A state playoff opener at Cardinal O’Hara.

“We can always rely on our defense and our PKs have been awesome,” LC senior co-captain Sean Cole said. “We finished four in both sets and Kellen (Ward) is a great goalie so we can always trust him when we get there. Once we get gassed, we’re not going to sub too much so it comes down to knowing our strengths and weaknesses.”

Cole had himself a game against the District 3 runner-up side. The senior midfielder had the size and strength to mix it up with the Blazers big and physical athletes in the middle, he scored LC’s only goal in regulation and it was his shootout kick that provided the winning margin.

LC coach Casey Farrell wasn’t surprised, saying the midfielder “doesn’t have an off button” and adding Cole’s motor gave the Crusaders plenty of push at times in a match where they were tested and pressured plenty. The scoreline hadn’t favored LC the prior two years with Mennonite winning 5-1 in 2017 and 3-0 last year.

Ward, the team’s outstanding junior keeper, played in the state loss last year but dealt with injuries in the run-up. He’s more than made up for the lost time this fall and made five saves during regulation and overtime along with several other crucial plays.

“My defense is great and all year they’ve been playing great which makes my job easy,” Ward said. “They were running nonstop, letting people run into them. They took a lot of hits but they do it all for the team.”

Lancaster Mennonite had the stronger chances early but LC’s defense held. Farrell noted a critical component of that was the offense getting over some early panic and putting its inventiveness and creativity to good use.

When things have gone wrong for LC this season, it’s usually from a lack of scoring and resultant panic to try and force something to happen. While the Blazers provided a hard-charging opponent, the Crusaders didn’t get knocked off their game.

Late in the first half, the team’s determination and drive paid off with a goal. Corey Toburen, who was excellent defensively all game, whipped a line-drive throw in to the box, which Matt McDougal drove on frame. The initial shot was saved, but as the keeper bobbled it, Cole powered in and booted the loose ball home with 2:45 left on the clock.

“Corey was doing a great job getting those throws in so it’s up to us to crash the keeper,” Cole said. “Matt McDougal put a good, hard shot on the keeper, he couldn’t settle it and I was just lucky enough to be there. My teammates earned that goal, I was just the one there to finish it.”

LC’s lead didn’t last long. In an unusual sequence, Ward was called for a foul to give Mennonite a PK with no time left on the clock. Cameron Hoober would convert the penalty but instead of disparaging LC, the Crusaders took it in stride.

“It’s been that way, myself, Evan (Senour), Jimmy (Alff) and a couple of the other seniors, we were laughing and saying ‘that couldn’t have happened five seconds later?,” Cole said. “You have to keep it light at times. You’re so serious and so into the game, you have to take a step back and realize you’re playing for fun too and that’s how we win games.”

Farrell felt the response was just perfect for the strides his group has made.

“A month ago, we would have been torn apart,” Farrell said. “I think it comes down to having been there before, we’ve had all these scenarios and we’ve been through it and knew what was going to get us out of it.”

Ward had saved a pair of PKs in the last shootout and whether that had an impact or not, the first two Mennonite shooters blasted their efforts off the woodwork. Ward, for his part, used his long frame as best he could to try and throw off the shooters.

“That is a big part of it, trying to take up the net and get in their head before they even shoot,” Ward said.

LC, which shot second, converted its first three attempts from the spot. Following a miss on the third try, Cole stepped up with the chance to send his squad through.

“You try not to think about it as much as you can,” Cole said. “I was nervous, I think we were all nervous and I’d bet they were all nervous. Even the player on our team who missed, he was the one that won it for us last game. It comes down to not thinking and just putting the ball in the back of the net and getting the job done.”

LC will face District 4 champion Lewisburg, a 4-0 winner Tuesday, in Saturday’s second round. It’s the first time since 2016 the Crusaders have played past the first round and they’re not content to be done yet.

“They know how to battle back, they know how to handle adversity and it’s an honor to coach them,” Farrell said. “We haven’t (won the first round) in a while, so it feels good to do that.”