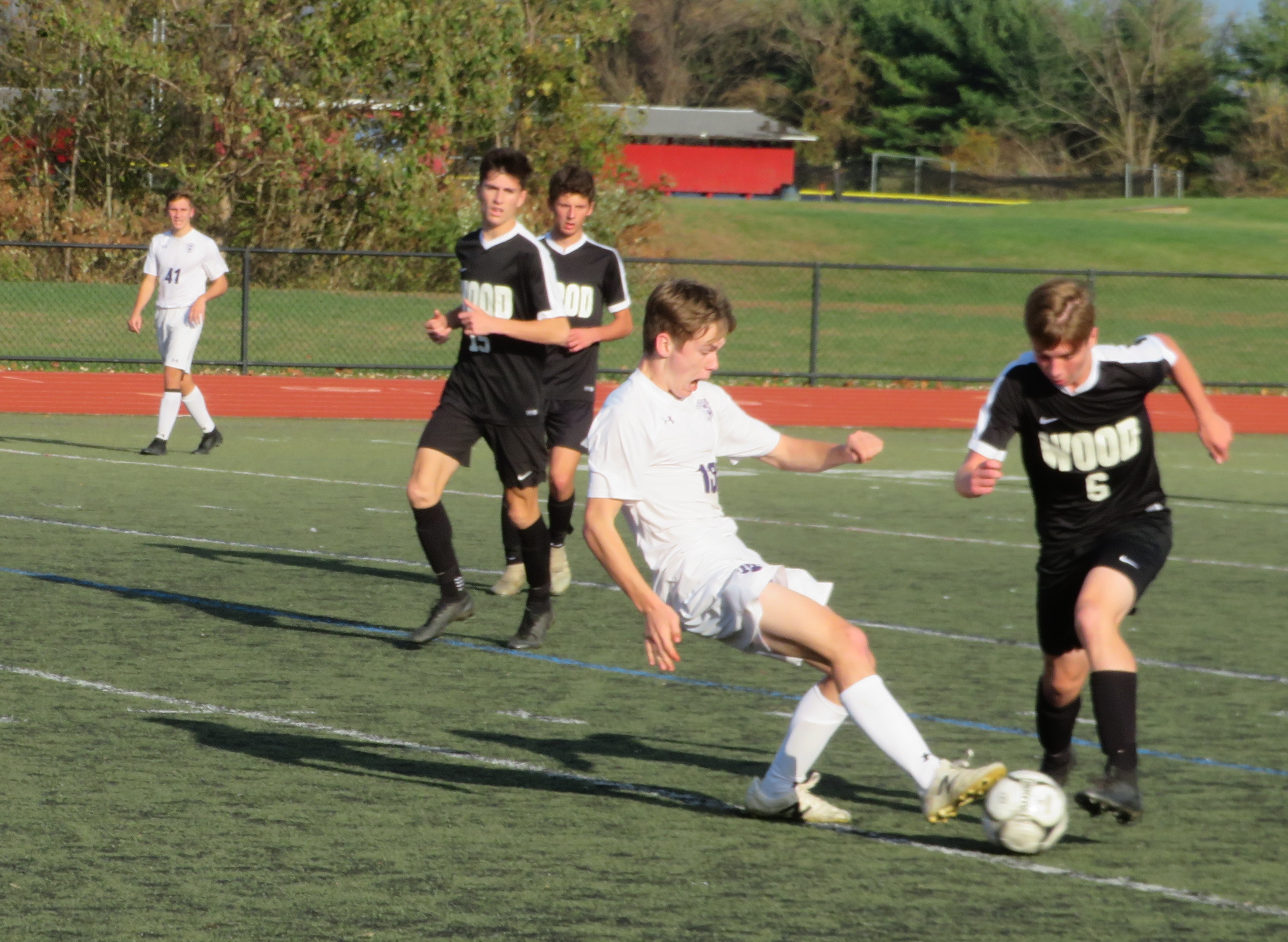 MARPLE >> Ryan Morgan heard the cries for him to shoot coming from the bench in the first half.

The Archbishop Wood senior knew he’d been too wasteful at times in the half, taking an extra touch or looking to get that perfect attempt instead of just blasting away. In a scoreless tie against a Northern York team that had threatened his team, Morgan knew it was time to get aggressive.

Morgan went on to win a corner that led to a goal, scored a goal on a rocket blast and assisted another as Wood topped Northern 3-0 in the opening round of the PIAA 3A boys soccer tournament Tuesday at Cardinal O’Hara.

“Coming into the year, I think a lot of people thought we were rebuilding but from the start, I never believed that,” Morgan, who was named First Team All-Catholic on Tuesday, said. “We’re here to win and here to stay. I see our team going far and I don’t see us going anywhere but forward.”

The District 3 runner-up Polar Bears were the better side early in the match and had three shots on goal in the first 13 minutes before Wood could even find its footing. Luckily for the Vikings, who won their state playoff opener for the third straight season, their defense has been quite firm of late and didn’t yield an early tally.

Northern had some quality players up top and in the midfield that had Wood playing a lot of long balls without intent and contesting too much in the air. Senior defender Matt Murphy, who scored the opening goal, felt like the key to settling in was playing with more composure.

“We had to settle down, play ball on the ground and to feet and we started to make the runs off of that and played as a team,” Murphy said. “The guy up top was very good at bringing it down out of the air and looking for the guys outside so we talked about marking them and not letting their guys run free.”

Northern keeper John White had a terrific game with eight saves but the most pivotal defensive play of the opening half came from Damon Troutman, who was able to clear a ball from Lou Daniele off the goal line following a corner kick.

After finding their footing, Wood slowly but surely asserted control over the proceedings and by half, felt like a goal was coming. Morgan, buoyed by the calls to fire away, also came into the second half looking to make something happen.

A shot from deep by center back Dom Petruzzelli won a corner, but Matt Haub’s service wasn’t quite able to find Murphy. Murphy wasn’t deterred and eagerly awaited the next chance at a corner.

He got one a few minutes later after Morgan made a run up the right, cut all the way across the box and fired a shot that White made a superb play on to palm out for a corner. Lining up for the corner, Murphy was determined to put this one away.

“On the first corner, I missed it by a little bit, I just wasn’t far enough back,” Murphy said. “The next one, I was there, the ball was there and it went in.”

Murphy soared at the far post, thumping the ball down, off White and through a defender’s legs for the opening goal with 24 minutes to play.

It was all Wood after that, with the Vikings going on to record an 11-5 advantage in shots on goal and a 7-1 edge on corners.

Morgan extended the lead to 2-0 with 16:51 left on a brilliantly-hit shot from about 25 yards out that scorched past everyone and rippled the back of the net. Admiring the effort, Morgan gave a brief arms-extended celebration before his teammates arrived.

“I had a few shots I should have taken instead of taking an extra touch and we talked about it at halftime,” Morgan said. “They were all screaming to shoot and when I looked, it was perfect bounce so I hit it as hard as I could and I know how to put it on frame.”

Wood, which reached the PIAA semifinals each of the last two seasons, had a different approach getting to states this fall. The Vikings played a rugged nonleague schedule that didn’t come with many wins but helped sharpen the squad for the PCL season and postseason.

Murphy, who missed time with a foot injury, found new life as a fullback after starting the year in the middle and his move helped facilitate a stronger back five. Likewise, the team got better at playing out of the back, moving through the midfielders and stretching teams, all aspects it put to work on Tuesday.

Morgan finished his day with a clipped-in assist to Shane Collier in the final seconds of the match after the two worked a good passing sequence to break down Northern’s defensive unit.

Right now, all that matters to the Vikings is the next few days of practice and getting a chance to earn a few more this weekend.