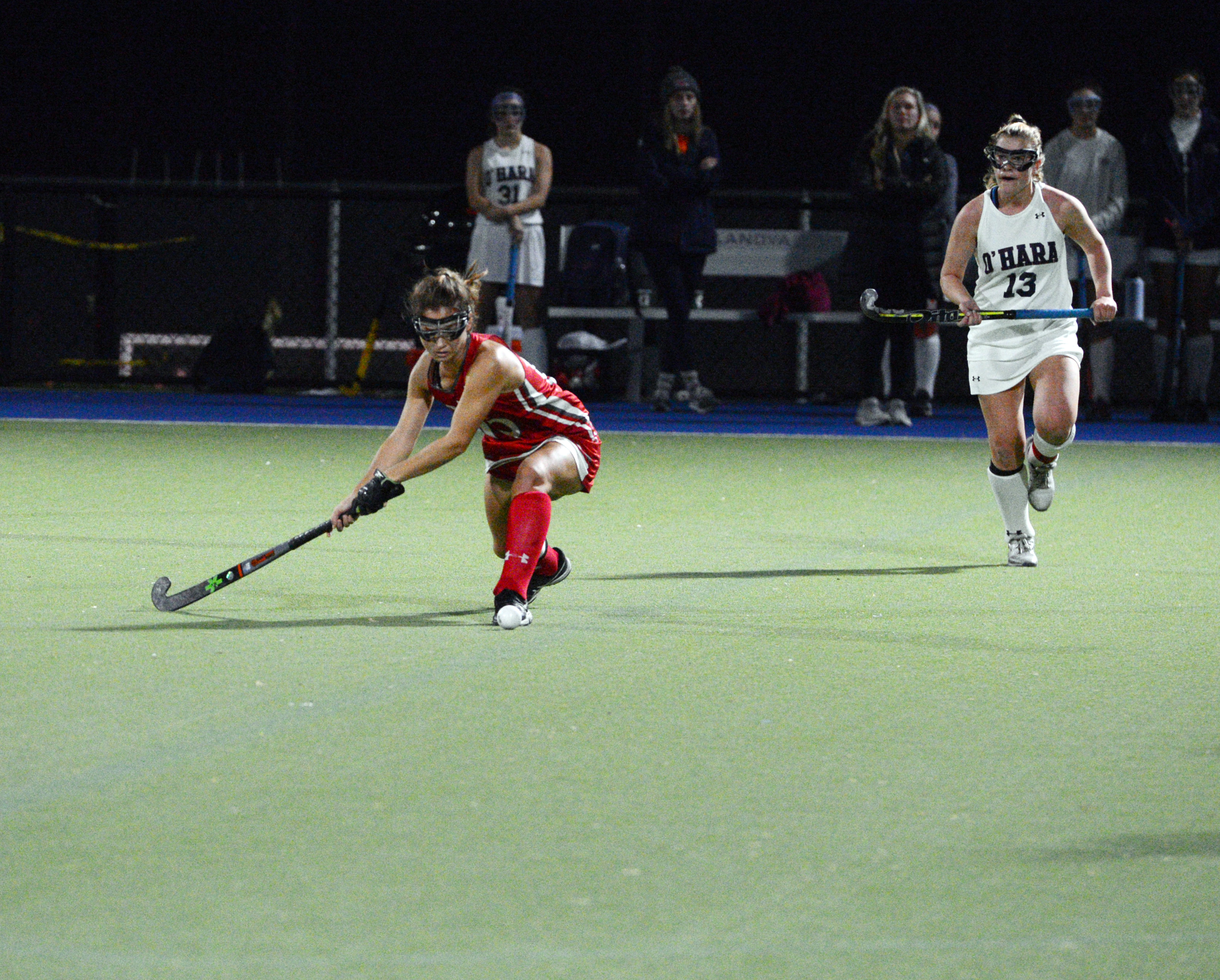 PLYMOUTH >> While making appearances in three of the previous six seasons, Owen J. Roberts did not have a state playoff victory before the 2017 campaign.

The Wildcats made history in 2017, defeating Cardinal O’Hara for its first PIAA win.

OJR and its 11 seniors added another piece of school history, again against the Lions, in the second round of the PIAA Class 3A Tournament on Tuesday at The Proving Grounds in Conshohocken.

Owen J. Roberts knocked off District 12 champion Cardinal O’Hara, 4-0, to win its second state playoff game in three years. The Wildcats will play the winner of Emmaus and Garnet Valley in the next round.

“We’re rebuilding this team this year,” senior Jenna Kirby said. “We’re very young. It’s exciting for them to get their first win and just keep on going. We don’t want the season to be over.”

The Wildcats nearly added another PIAA win last season, but they fell to eventual state champion Hershey, 2-1, in overtime in the first round of the state playoffs.

The first-round defeat was something OJR thought about the this offseason and part of the reason why the Wildcats’ senior class made it their objective to get back to the second round of the PIAA tournament this season.

“We were with the state champs,” senior defender Rory Cahill said. “We went into overtime, and there was one goal from sending us to the second round. Coming out and playing this game, we definitely had that in the back of our heads that we want to make it to the second round and win.”

Despite a 2-0 halftime lead provided by goals from Raina Smolij (assisted by Kirby) and Kirby (assisted by Rylee Laloup), the Wildcats had last year’s loss in the back of their minds throughout Tuesday’s contest.

They kept the pressure on in the second half. Laloup added an unassisted goal with 20:22 left in the game, and Julia Lamb found Olivia Leclaire in front with 4:21 left to finish off the victory.

“It lit a fire under our butts to keep going,” Kirby said. “We did not want that to happen to us again this year. That definitely pushed us in this game, like we can’t have that happen.”

OJR converts on its fifth corner. Raina Smolij with the goal. 1-0 with 14:58 left in first. pic.twitter.com/DKgrZudbnh

Owen J. Roberts was the aggressor from the start of Tuesday’s contest, putting two shots on goal in the game’s first two minutes. The Wildcats earned five corners before Smolij broke through for the team’s first goal of a corner with 14:48 to go in the first half.

OJR won 14 corners compared to one for Cardinal O’Hara in the game, leading to 17 shots on goal. The stellar play from O’Hara goalkeeper Gianna Travia and her defense kept the Wildcats from pulling away until late.

Travia, who let up just one goal in the Catholic League regular-season play, made 10 saves, including a handful of diving stops. Michela Favazza, Sami Randazzo and Emma Shallow all added defensive saves as well on what looked to be surefire OJR scores.

“Our girls defensively played really well against them,” Cardinal O’Hara coach Jenna Spaeder said. “They played a heck of a game back there.”

Jenna Kirby puts OJR up 2-0 with 7:47 left in first. pic.twitter.com/OjuATl7PdI

After making appearances in each of the last eight seasons, O’Hara is still looking for its first PIAA win since its first state playoff game in 2008. Next year, they’ll try again without Randazzo, Travia and senior forwards Sara Grassi and Katie Shallow, all first team All-PCL selections.

There was still plenty to celebrate from O’Hara’s 2019 campaign. The Lions finished off an undefeated Catholic League season with a 3-2 overtime win over Archbishop Carroll in the PCL title game.

“We went undefeated in the Catholic League. It was great,” Spaeder said. “We had a great season. We had a lot of good seniors who we’re going to miss a lot next year, but we’re going to definitely prepare and get ready for next year.”

Aside from a postgame chest bump between Laloup and senior goalie Cayden Jarvis, the OJR celebration was rather subdued after Tuesday’s state playoff win. The Wildcats have goals of making even more history down the line.

“We lost a lot of people last year, but we definitely deserve this win,” senior defender Rory Cahill said. “We played our hearts out.”