Orvieto sets the tone to lead Villa Maria over O’Hara 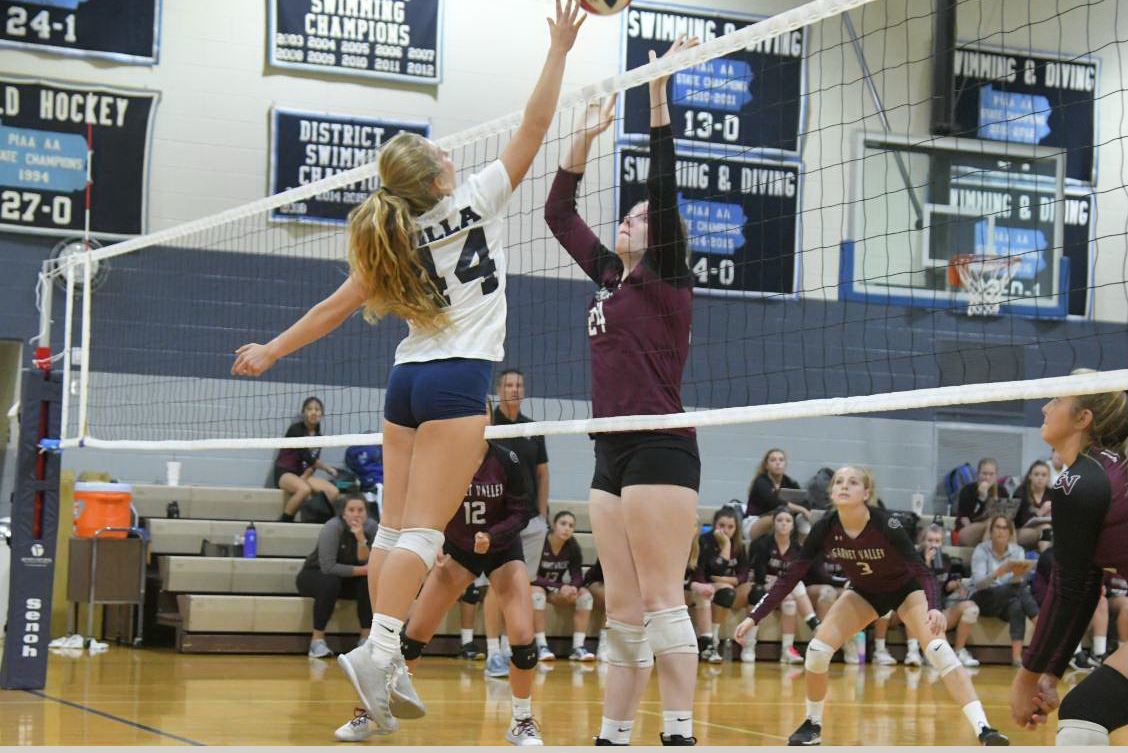 Alivia Orvieto, left, in action against Garnet Valley earlier this season, paced Villa Maria to a 3-0 victory Tuesday over Cardinal O'Hara in the opening round of the PIAA Class 3A girls volleyball tournament. (DFM File)

UPPER DARBY — Before the season started, Villa Maria volleyball coach Peggy Evans planned to use junior Erin Keaveney as her setter and then Evans had a change of heart.

Keaveney was too good as an outside hitter to move to setter. So Evans turned to senior Alivia Orvieto, who had been the Hurricanes’ libero for the last three years.

It turned out to be the perfect move as Villa Maria is headed to the PIAA Class 3A quarterfinals for the second year in a row following a 3-0 victory over Cardinal O’Hara Tuesday at Bonner-Prendergast.

Orvieto handed out 27 assists and controlled the tempo from the start in the 25-11, 25-20, 25-22 victory that sets up a match with District 11 champ Southern Lehigh, a 3-1 winner over West York, at a site and time to be determined Saturday.

Cardinal O’Hara’s Lauren Garvey, in action against Strath Haven earlier in the season, collected six kills and seven digs as the Lions dropped a 3-0 decision to Villa Maria in the opening round of the PIAA Class 3A volleyball tournament. (Pete Bannan/MediaNews Group)

“We were in search of somebody to run our offense and Alivia stepped up,” Evans said. “She’s a coach’s dream. She’s played so well and sacrificed any awards and accolades that she would get as a libero for the team. She would do whatever it takes for the team.”

That’s what leaders do and the switch from libero was not a difficult one for Orvieto, who will play beach volleyball at Florida Atlantic University.

“For beach volleyball we have to pass, set and hit, so I was already well versed in setting for outdoors. So when I switched, it was more training the exact positions for the sets for each hitter that I had to get the ball to,” Orvieto said. “It took a few weeks into the season to do that. We definitely weren’t as together as we are now.”

Orvieto was in sync with her hitters and that proved to be too much for the Lions. Keaveney showed she belongs at outside hitter. She finished with 14 kills and eight blocks. Fellow junior and outside hitter Alessia Giannandrea added seven kills. Giannandrea, Olivia Karkenney, Amelia Collins and Gabriele Konrad were a force at the net on defense, too.

Libero Ava Goryl paced that defensive effort with nine digs, but it was Orvieto who set the tone for the Hurricanes right from the start. He had an assist and an ace to help Villa Maria (19-3) jump out to a 6-0 lead in the first set. That advantage eventually grew to 20-5 before the Lions made a late run to make it respectable.

“Our team thrives on our energy and how we’re playing in the moment so however we start that’s usually the momentum we finish with,” Orvieto said. “In a game of this magnitude we knew that we had to start strong to finish strong.”

As for the slow start on O’Hara’s part, senior outside hitter Lauren Garvey had an explanation for that

“We didn’t believe that we could win and then we realized we could play with them and we started to pick up our momentum and played the way we know we can play,” Garvey said

O’Hara did regroup and made a game of it in the final two sets behind the play of Garvey (six kills, seven digs), Reagan Hickey (five kills, 11 digs) and sophomore Bridget McGuinn (five kills) . The Lions never had the lead in the second set, but did make the Hurricanes work late to pull out the five-point victory.

Orvieto was key down the stretch. She had a kill to give Villa Maria a two-point lead, a block and an assist before a hitting error put the Lions in a 2-0 hole.

The Lions finally got their first lead of the match in the third set and was up 9-8 at one point, but could not put together the run they needed to swing the momentum in their favor.

“That’s what I just got done telling them,” Collins said. “From halfway through the first (set) on we game them a battle. They’re the No. 6 ranked team in the state (in Class 3A by the Pennsylvania Volleyball Coaches Association) for a reason. They play tremendous defense. Balls don’t hit the floor … I feel sorry for Southern Lehigh or West York.”