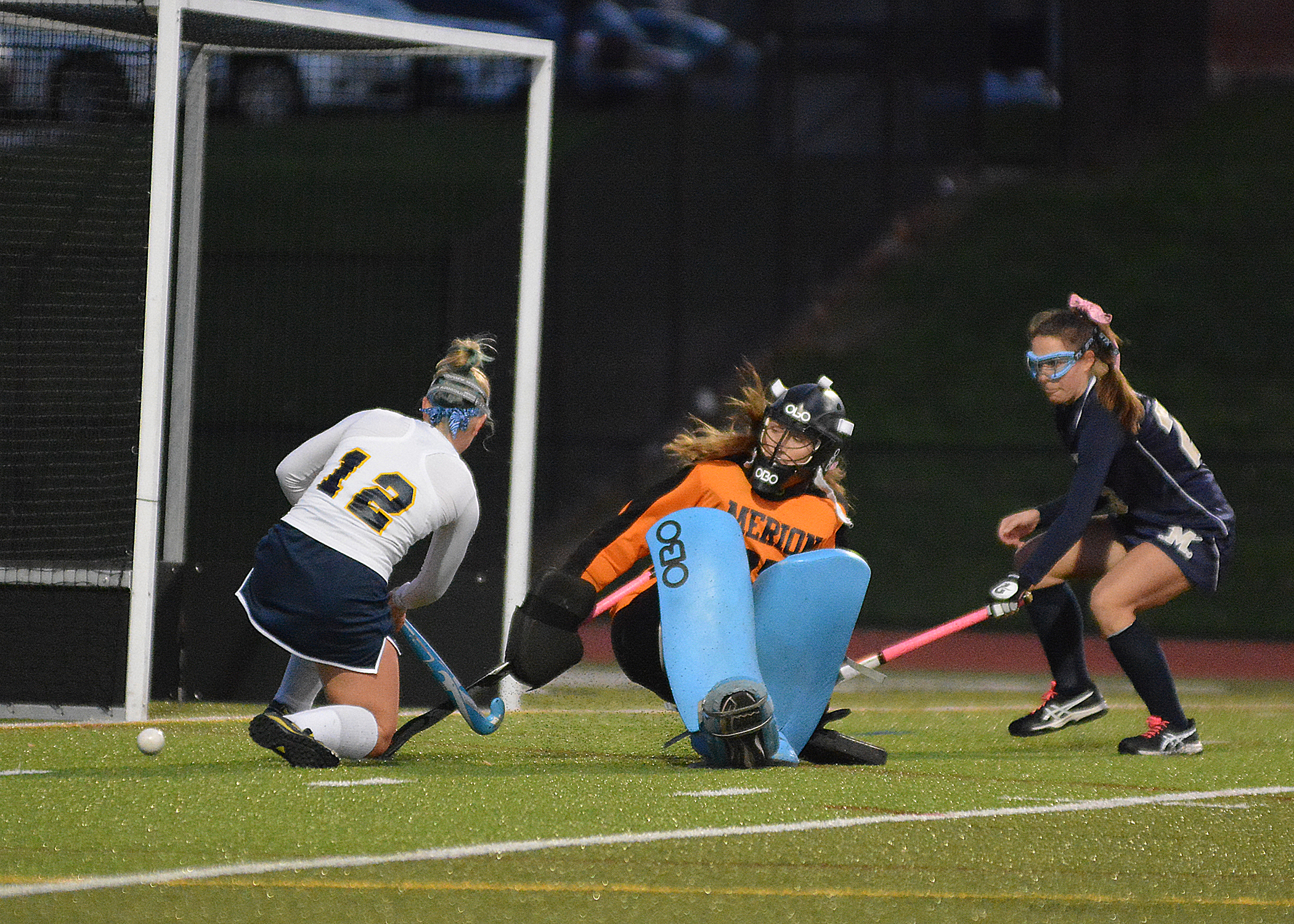 EAGLEVILLE—it was everything you could want in a district title game. It was close, tough competition. The final outcome came with literally no time remaining. And the game even included some controversy that included a crazy couple of minutes that saw both teams’ starting goalies carded each earning a two-minute penalty.

But in the end, No. 5 Merion Mercy came up with an overtime goal to top No. 3 Upper Perkiomen by a score of 4-3 for the District 1, Class 2A championship.

“This was a really good high school field hockey game between two good teams,” said Upper Perk coach Jamie Warren. “I though both teams played really good, aggressive field hockey, and even though we didn’t get the outcome we wanted, we’re still going to play in states next week, and maybe still have a chance to play for a title in a couple weeks.”

Merion Mercy got on the board first, with Victoria Arra putting a pass on the stick of Emily Hawk, who slammed it home for the 1-0 lead. But the Indians answered back within two minutes when AiYi Young converted a corner to tie the game at 1-1.

The Indians grabbed their first lead of the game with a goal at the 12-minute mark, with Young picking up an assist on a goal from Bella Carpenter, but it was short-lived as Merion answered right back on a goal from Grace Lopresti. The game went to the break at 2-2.

Both defenses began to pick up their play in the second half, and no scoring game until just about midway through the half when Upper Perk was awarded a penalty corner. The Indians inserted to Young at the top of the circle, who took things on herself, and slammed home the long-range shot for a 3-2 Upper Per advanantage, and time ticking down.

Merion Mercy tied it with just under ten minutes to play when Hawk scored her second goal of the game, and then things got weird.

With Merion pressing hard in front of the cage, Upper Perk goalie Linnsy Joyce got a stick lodged in her glove, and was given a card and a two-minute penalty. The Indians were allowed to sub in another goalie, but had to play shorthanded.

On the ensuing penalty corner, back-up goalie Carly Eidle picked up a save.

“We played a lot of subs today, and they all made plays for us,” said Warren. “Knowing we can rely on those players is going to help a great deal as we move on in states.”

Then, not thirty seconds later, the Merion Mercy goalie was tagged with a card and a penalty, leaving both teams shorthanded and with back-up goalies.

“I’m still not clear why that wasn’t a penalty stroke,” said Warren. “She took out our player long before getting the ball. I don’t usually like to talk about officiating, but this was a championship game.”

But despite the disadvantages facing both teams, neither could exploit the opportunities, and the game headed to overtime.

Field hockey’s 7-on-7 overtime format lends itself to excitement. The play is fast, and just when you think one team has the advantage, it’s going back the other way. Both teams had their chances in the OT, but for nearly the full 15-minute period, neither could get anything done. Finally, Merion Mercy was awarded a corner as time expired, and the corner would get played to completion.

Merion put the ball in play, then sent a ball towards the cage, where Alexandria Lavelle was ranging to her left, then hit a nice little reverse chip that banged off the backboard for the game-winner.

“I thought we actually dominated the overtime, but just couldn’t finish or force enough corners,” said Warren. “But we’ll just put this behind us and get started all over on Tuesday for states.”