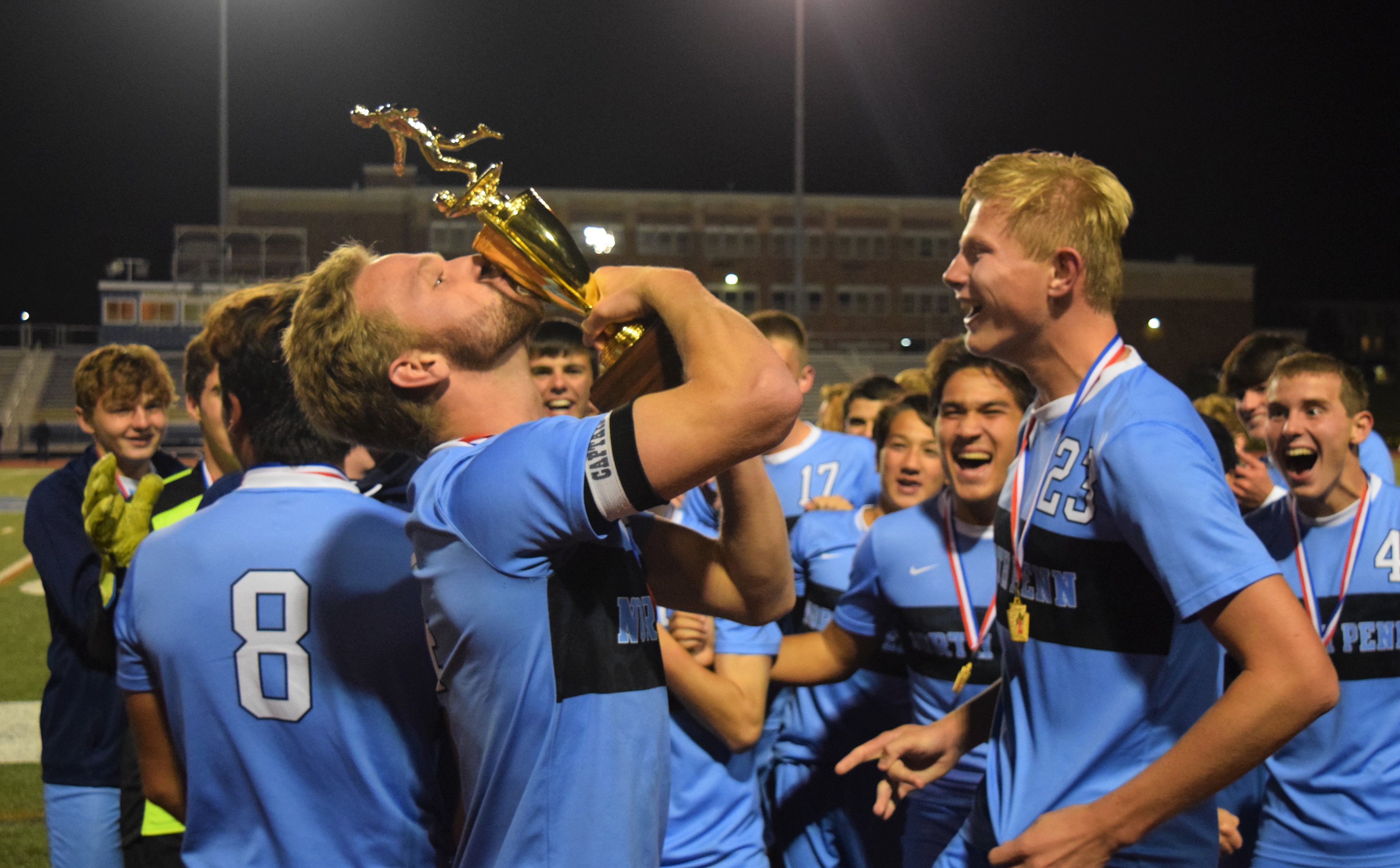 That was three years ago as a freshman in the second round of the state playoffs, a place he thought he would get back to the next year. It didn’t happen as a sophomore and it didn’t happen as a junior, setting the stage for a rampant senior season that helped propel  the Knights to the District I 4A final.

As he rode the bus to Spring-Ford on Saturday, the senior forward couldn’t help but think back to that November day in 2016, but by the end of the night, with a medal around his neck, it was an entirely different feeling.

Thanks to a right place, right time poach of a goal by Hunter Stites, the top-seeded Knights downed No. 3 Boyertown 1-0 to win the program’s first District 1 title.

“It’s one of the best feelings in the world. At the beginning of the season we talked about this being our goal and we accomplished it,” Houlihan said. “We put in so many hours of relentless work and we went out and accomplished it.

“It’s something I thought about, we lost to West Chester Henderson the last time we played here and it was a heartbreaking moment so coming back here and showing we’re the most dominant team in the district, it’s fantastic and hopefully we can carry that momentum into states.”

The North Penn boys’ soccer team poses with the District 1 trophy after winning the 4A title over Boyertown Saturday at Spring-Ford. (Austin Hertzog – MediaNews Group)

North Penn’s made it a point all season to always be on the attack and the top seed in the district looked to do that again off the tap against the PAC champion Bears. Boyertown doesn’t have the same level of attacking prowess as the Knights but the Bears thrived all season as a well-organized and disciplined group that could win with defense and grind out close games.

Knights junior Josh Jones said the last thing his team wanted to do was get drafted into playing Boyertown’s style, so they pushed the ball at every chance and sought every possible opportunity.

“We knew whatever they threw at us, we could change it up and play it our way,” Jones said. “They’re a very hard-working group, we saw that in the scouting report so we knew we had to transition up and back very quickly. Credit to them, they work very hard when they don’t have the ball to win it back.”

Yet for all the Knights’ efforts, the corners and free kicks, they had nothing to show through 50-plus minutes. Boyertown’s defense was dug in and keeper Mason Kurtz was simply tremendous covering their backs, Ryan Foskey, Kolby Houck, Justin Patten and Matt Selders.

The keeper was quick off his line and quick to react, flying out to punch away a couple Knights set pieces before North Penn could do anything with them.

“All the credit to North Penn,” Bears coach Mark Chambers said. “They have some players who are the type of player we haven’t seen all year with their ability to control the game like that.”

In a match where chaos ruled, the lone goal was born of it. A moment of indecision in the box allowed North Penn sophomore Hunter Stites to hit a volley over Kurtz with 23 minutes left in the second half.

“I saw my opportunity, it dropped right in front of me and I just lobbed it right over the keeper,” Stites said. “You always have to be aware, mistakes are going to happen. One happened right there and I pounced on it.”

“We thought if we were going to get a goal, it’d be a little prettier, but hey, we’ll take anything,” Houlihan said. “Hunter poached it, he was in the right place at the right time and put in the most important goal of the season for us.”

It was an unfortunate breakdown for Boyertown’s defenders but one Chambers felt could strengthen the group going forward.

“I saw miscommunication between my center backs. I thought it could have been dealt with very easily,” Chambers said. “It just needs to be cleaned up. That was a mistake from our defense, which this year has been very solid. It’s unfortunate, but it happens.

“I know they know what happened there and it won’t happen again.”

After two years of early exits in the district playoffs, the Knights’ focus all season was to get back to states. Once they accomplished that, their sights changed to making history for the program by reaching and winning its first district title.

“We just have to keep going with the mindset our season could end on any night in states,” Jones said. “It’s one and done so we have to leave everything out on the field every night. We’re elated right now and we want to carry this momentum into next Tuesday.”

After taking the lead, North Penn went into protect mode. Keeper Sawyer Meade continued his strong postseason while the defenders in front of him came up with a handful of big stops and clears with the clock winding down in the second half.

Boyertown (20-2-2) refused to give up on the match and worked to put in an equalizer but just couldn’t seem to find the right connection in front of goal. Both teams were rolling entering play Saturday but while the Knights got to keep theirs, Boyertown must now start a new winning run to make a push through states.

“It’s going to be difficult. We have to refocus now,” Chambers said. “We haven’t tasted defeat since early September. We had three phases: we had the PACs, we had districts and now we have states. We have enough leaders on this team that I think we’re going to be able to talk about this and fix the things we need to fix.”

The Knights believe there’s still more to come for them this fall. Houlihan cited the squad’s depth as a huge help during the rugged district tournament and is confident the team’s mentality won’t wane before Tuesday.

On Saturday, however, all the Lafayette recruit could think about was returning to the site of one of his most painful losses, banishing a bad memory and replacing it with one of elation.

“It couldn’t go by fast enough,” Houlihan said. “They were getting good pressure toward the end so we were sitting back, hoping to just clear the ball and there were a couple scary moments. We stayed composed. We’re all buzzing right now, this is one of the best feelings ever.”