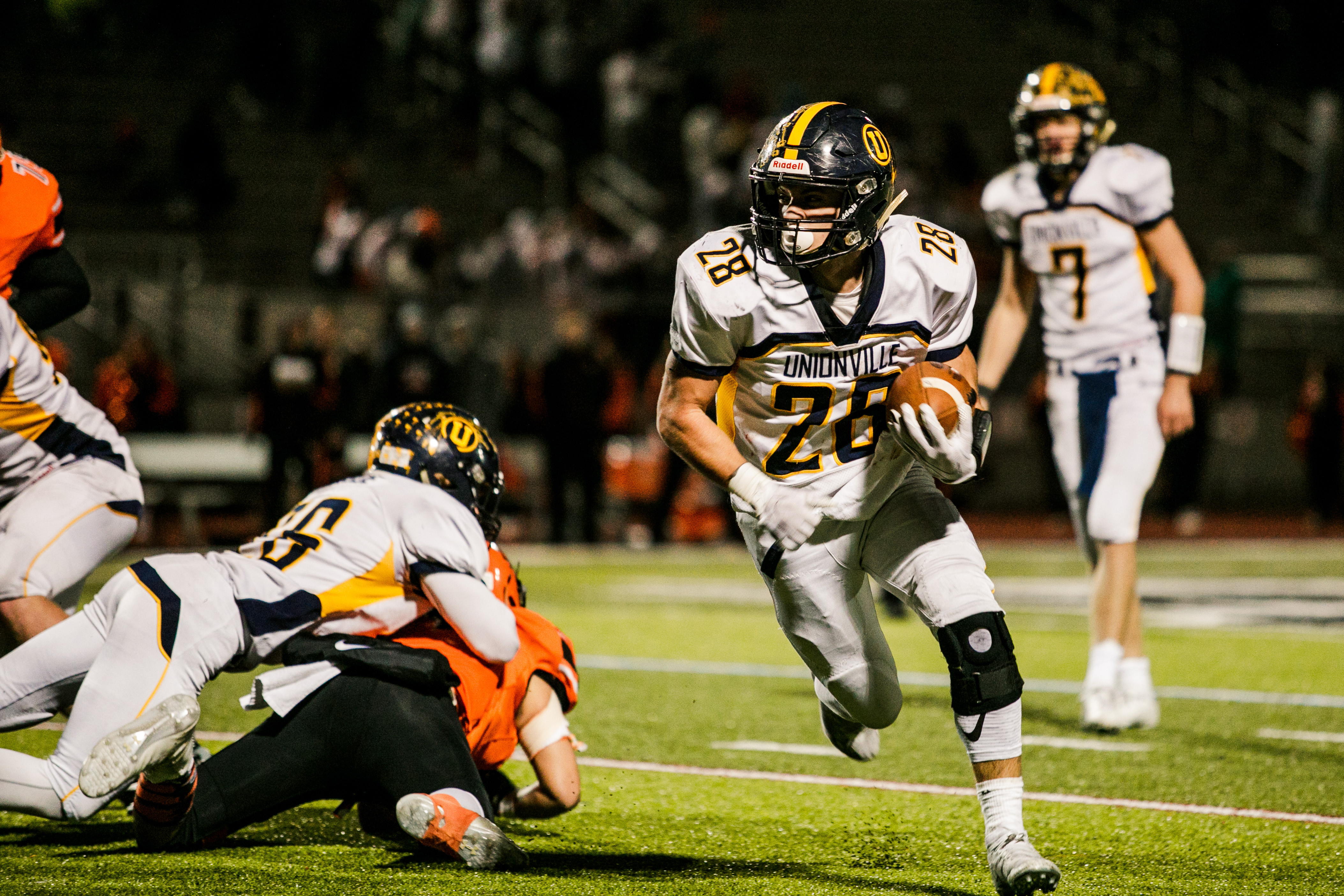 Unionville's Connor Schilling gets around the edge against Marple Newtown. (Nate Heckenberger - For MediaNews Group)

NEWTOWN SQUARE — Unionville coach Pat Clark has an interesting explanation of his team’s ability to perform well in the playoffs.

“For our seniors, this is their 10th playoff game,” Clark said. “That’s like they’ve played an extra season of football.”

That extra season will continue at top-seeded Cheltenham next weekend after the ninth-seeded Indians knocked off No. 8 Marple Newtown, 28-10, in the opening round of the District 1 Class 5A playoffs Friday.

Unionville (8-3) used a short drive in the first quarter and a long march in the second in building a 14-3 halftime lead.

After a short punt helped Marple Newtown (7-4) to its only touchdown in the last minute of the third quarter, the Indians needed only nine plays to cover 99 yards for the TD that left little doubt which team would be advancing in the playoffs.

“At that point, we just said we were going to win this game and we moved the ball,” said Connor Schilling, who accounted for 42 of his 207 yards rushing on the scoring drive.

Schilling put the finishing touches on the march, getting six points on a 10-yard run with 8:55 to play for the last of his four scoring runs.

“We’ve been successful in the playoffs and that’s what people have expected of us,” Schilling said. “The seniors knew this could have been our last game tonight and didn’t want that to happen.”

Austin Weeber, Ryan Son, Daniel Son, Jack Tuel and Ryan Knightly were among the offensive linemen Schilling and Clark gave credit to for their team’s success.

“We came here to run the football,” Clark said. “The guys up front got after it tonight. If something happens, they cover for each other.”

What happened first for the visitors was holding Marple Newtown on downs at the Tigers’ 43. Schilling covered 25 yards, then quarterback Blake Charlton took the ball to the 5 before Schilling got his first touchdown.

A Charlton interception cut short Marple’s next drive, and Unionville went 90 yards in 15 plays, with Schilling scoring on a 12-yard run five minutes before halftime.

Marple Newtown’s Jimmy O’Brien attempted two field goals before halftime, with a 28-yarder going wide before he hit from 37 yards on the last play of the second quarter.

A 50-yard drive that used nine running plays got Schilling his third TD on the first possession of the second half.

Robbie Reilly got a hand on a Unionville punt, and Joe Paoletti tossed a touchdown pass to Eric McKee 56 seconds before the third quarter ended.

That’s when Unionville took the ball the length of the field for the final TD.

“We know they are young,” Clark, a former Marple Newtown head coach, said of the Tigers. “They’re going to be good for the next couple of years.”

Marple Newtown coach Chris Gicking stood in an end zone as each of his players shook hands with every member of the coaching staff. Even though their playoff hopes were dashed Friday night, the Tigers will return to the practice field in a few days to prepare for the game at Penncrest the night before Thanksgiving which they have added to their schedule.

“It’s tough any time you lose a game,” Gicking said. “It’s even tougher when it’s a playoff game. Give Unionville credit for how they played tonight, when weren’t playing our best.

“We have time before we play again, so we hope to get healthy. We have 12 seniors, and we want to send them off the right way in their las