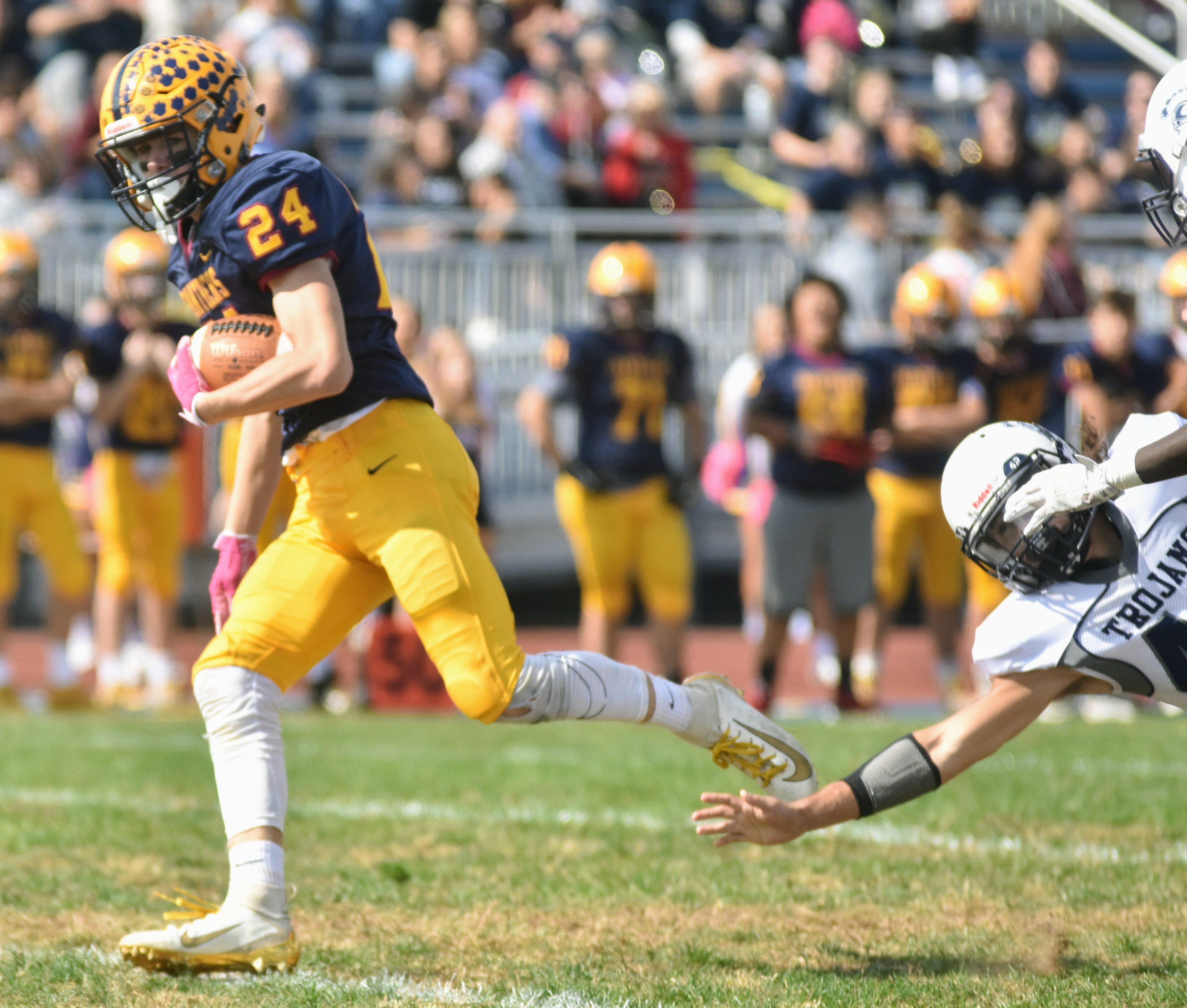 EAST NORRITON >> Its stung pride was soothed by the perfect balm Friday.

After falling to Spring-Ford in the Pioneer Athletic Conference’s championship game one week ago, Pope John Paul II found redemption in the opening round of the District 1/12 Class 3A playoffs. The Golden Panthers responded to their previous setback by rolling over School of the Future, 52-16, at Norristown.

It was a monumental win for PJP: The first in a postseason for the legacy-focused program. It ended two years of opening-round futility and put the Panthers in next week’s title game against Neumann-Goretti, which advanced with a win over Lansdale Catholic.

The passing game was dominant on both sides. Panther quarterback Kamal Gray threw four touchdown passes to three different players as part of his 16-for-21, 274-yard night. Dylan Walker was on the receiving end of TD tosses covering 15 and 12 yards that helped PJP to a 32-8 halftime advantage.

For the Firebirds, junior signal-caller Diandre Green launched 41 passes, completing 22 for 307 yards. Tosses to Khyrie Isaac (49 yards) and Tiar Young (60), alongside a conversion pass on the second score, accounted for the bulk of SOF’s point production.

“The passing game is a big part of what we do,” SOF head coach Marcus Fulton said. “Our quarterback holds school records for passing yards and touchdowns. Our wide receivers Young, Isaac — this is his first year playing football — Kahsir Williams and Henry are big, too.”

A big difference for PJP was the play of its running game and defense. They contributed four more TDs in helping the Panthers (9-2) bring the running clock into play with less than three minutes left in the third quarter, and the “D” was key to keeping the 36-point margin hold up by forcing the ‘Birds to turn the ball over on downs twice inside the red zone in the final eight minutes.

“Looking back last week in the fourth quarter, our number-one thing was to stop them,” Graver said. “They’re a resilient group.”

Andrew McDonald and Chris Bruder got PJP rolling with their first-quarter rushing TDs. McDonald roared nine yards up the middle after teammate Julian Paskel blocked a SOF punt three minutes into the game, and Bruder made a seven-yard sprint off-center two minutes before the end of the first quarter.

Defensively, Matt Dobrowski recovered a Green fumble in the end zone early in the second half. It redeemed a Panther drive deep into Firebird territory that ended with a lost fumble at the two.

“Last week was disappointing and frustrating,” Gray said. “We came out ready to play this week.”

Five different Panthers were on the receiving end of Gray passes, four of them multiple times. Steve Skarbek covered 38 yards on four catches, and McDonald had three receptions good for 73 yards.

But the big strike was a 91-yard collaboration between Gray and Justin Kormos (two catches, 105 yards), which came after SOF got a 60-yard scoring play from Green and Young one play from scrimmage earlier.

“We knew we could attack their weaknesses … their coverages, tendencies and spots open,” Gray said. “Doing that, we were able to come out with the victory.”

Capping PJP’s point production was Josh Little scoring on a 12-yard burst through the middle with 2:53 left in the third quarter.

“We challenged Kamal, our receivers and tight ends to execute,” Graver said. “We were average last week. We needed to be great.”

The next challenge for PJP comes in the form of a Neumann Goretti unit sporting an 11-0 record and several Division 1 college prospects. A district championship and berth in the state playoffs is at stake.

“We have to be great next week, in all facets,” Graver said.
“We’ll study the film, and come out ready to play,” Gray added.

NOTES >> The Panthers’ two previous forays into the district playoffs ended with first-round losses. … The PJP fan base followed with interest the updates from the Spring-Ford/Haverford District 1-6A playoff game. … The game action was halted around the 8:34 mark of the third quarter in response to a member of the officiating crew who was in a collision with an SOF player. … School of the Future achieved what it did this fall in spite of a 45-man roster carrying just five seniors. “We grew up a lot during the season,” Fulton said.