Hertzog: Boyertown soccer bouncing because of special bond between teams 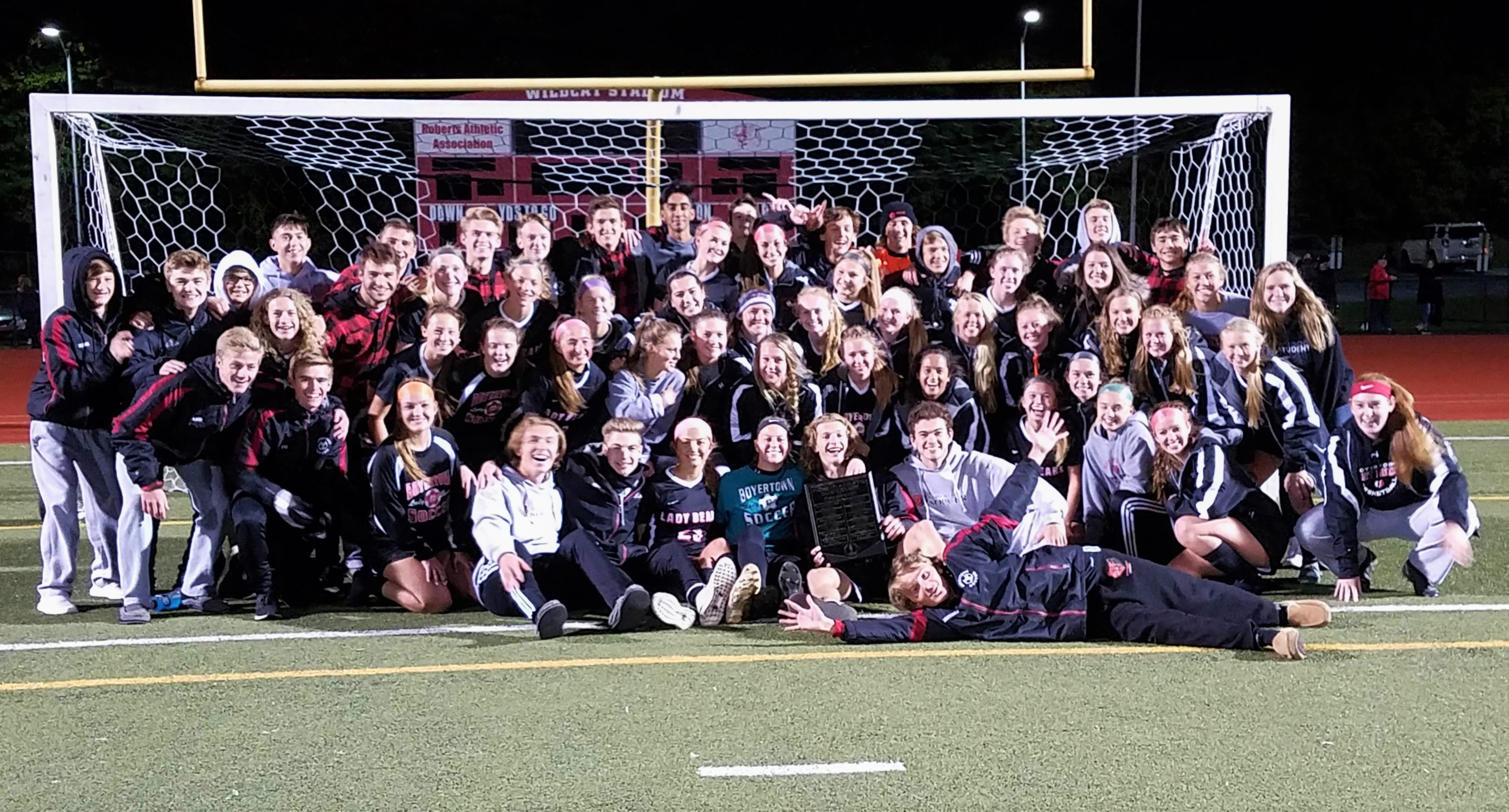 The Boyertown boys soccer team had just finished arguably its biggest win to date, a hard-earned road victory against its nearest rival Spring-Ford.
Postgame high-fives and hugs were barely done, but the Bears attention already shifted.

“2-2, heading to overtime,” the reporter told them.

“Let’s go! We’ve gotta hurry!” they said, quickly grabbing their bags and running for the bus.

The Bears didn’t make it in time on Oct. 3 to see the game-winner in the first minute of the second overtime, but it didn’t stop them from joining friends and family to cheer each member of the girls’ team off the field after their own 3-2 win over Spring-Ford.

Anybody who can look at a bracket or read a headline knows it has been a special fall for the Boyertown soccer programs.

But it’s been equally special in the way the two teams have supported one another.

It sounds basic: they’re classmates, they play the same sport, many of them are friends.

But after 14 years covering soccer in the Mercury area and being disappointed by the lack of support for even some of the most successful teams, it’s been awesome to see the camaraderie between the squads.

“I love the bond we have with the boys’ team,” said girls’ senior midfielder Maddie Monka. “Our friend groups are all together, so it’s all a big group and we love supporting each other. It’s such a good atmosphere and environment whenever they’re at our games and we always try to go to theirs.”

“We’re all so close to each other, we decided it was something we wanted to do,” said junior Braden Bartman of the support of the girls’ team.

The Oct. 3 matches with Spring-Ford weren’t the only evidence.

Two days earlier, the girls’ bus was in full voice arriving back to Boyertown off their 4-2 win over Owen J. Roberts, rushing in to join the student section for the conclusion of the boys’ match against OJR.

They were there to celebrate Matt Kerr’s overtime game-winner, a 2-1 win that snapped a winless streak against the Wildcats that dated back to Oct. 7, 2015.

Yes, it’s easy to root for a winner, and both were enjoying outstanding regular seasons – the boys eventually going 10-1-2 in the Pioneer Athletic Conference, the girls 12-1 – but neither could have known that was just the beginning.

It was a dream doubleheader for the Bears in the PAC championships on Oct. 17.

The boys got the job done in the first final, a commanding 2-0 win over Spring-Ford, and continued to impress from the stands for the girls’ title game.

“PAC final, easily,” said boys’ senior midfielder Jake Groff of the highlight of their support. “It was all of us with our other classmates from school and we led the student section and we brought the chants. Usually at a football game you hear one or two chants. But we were constantly chanting, trying to create a European atmosphere. We felt it.”

They even had songs.

When Camilla Kuever – the girls’ standout midfielder and German exchange student – netted her first and second goals in the eventual 3-0 win over Spring-Ford, it sounded like a game in Europe with the supporters in full voice.

22 on her back
We’re gonna win the PAC

It was quite the surprise to Kuever hearing her name cascading from the stands, a song credited mainly to Bartman and Josh Torrens.

“I couldn’t hear the exact words. But I really appreciate it,” Kuever said after the final.

“Hearing them in the crowd makes us feel better about ourselves and feel more supported,” said senior center back Morgan Kline.

The Bears teams have stayed tight through districts: they were doubleheader winners again in the quarterfinals at home on Oct. 26, the No. 3 seed boys besting Neshaminy 2-1, the No. 2 seed girls edging Unionville, 1-0, as the boys’ team kept it lively from the southwest corner flag.

“We both knew we were going to be pretty good this year, but it happened at PACs, which was an unbelievable experience,” Groff said. “And then it started picking up for districts.”

They were separated for the semifinals on Oct. 29 with the boys away at No. 2 Lower Merion, but the support didn’t waver: after Landon Wenger’s overtime goal gave the boys a 1-0 trip to the final, the boys were FaceTiming with friends to get a glimpse of the girls’ penalty kicks against Conestoga.

“Every save and every score, we were just going crazy on the bus,” Jagger Sokel said.

The girls’ team, fresh off their win over the Pioneers (3-2 in penalty kicks), awaited the arrival of the boys to return from Ardmore, wanting to celebrate together.

“I think (the success we’ve had) is because of the support we’ve had, from the community, from the boys’ team,” girls’ senior goalkeeper Mattie Gallagher said. “We show up for them, they show up for us.”

Saturday, the Boyertown boys became the first PAC program to play in the District 1 final in the large-school classification. The girls were just the third in the past 15 years.

Regardless of results, the Boyertown boys and girls soccer teams were together, and that may have been the best part.