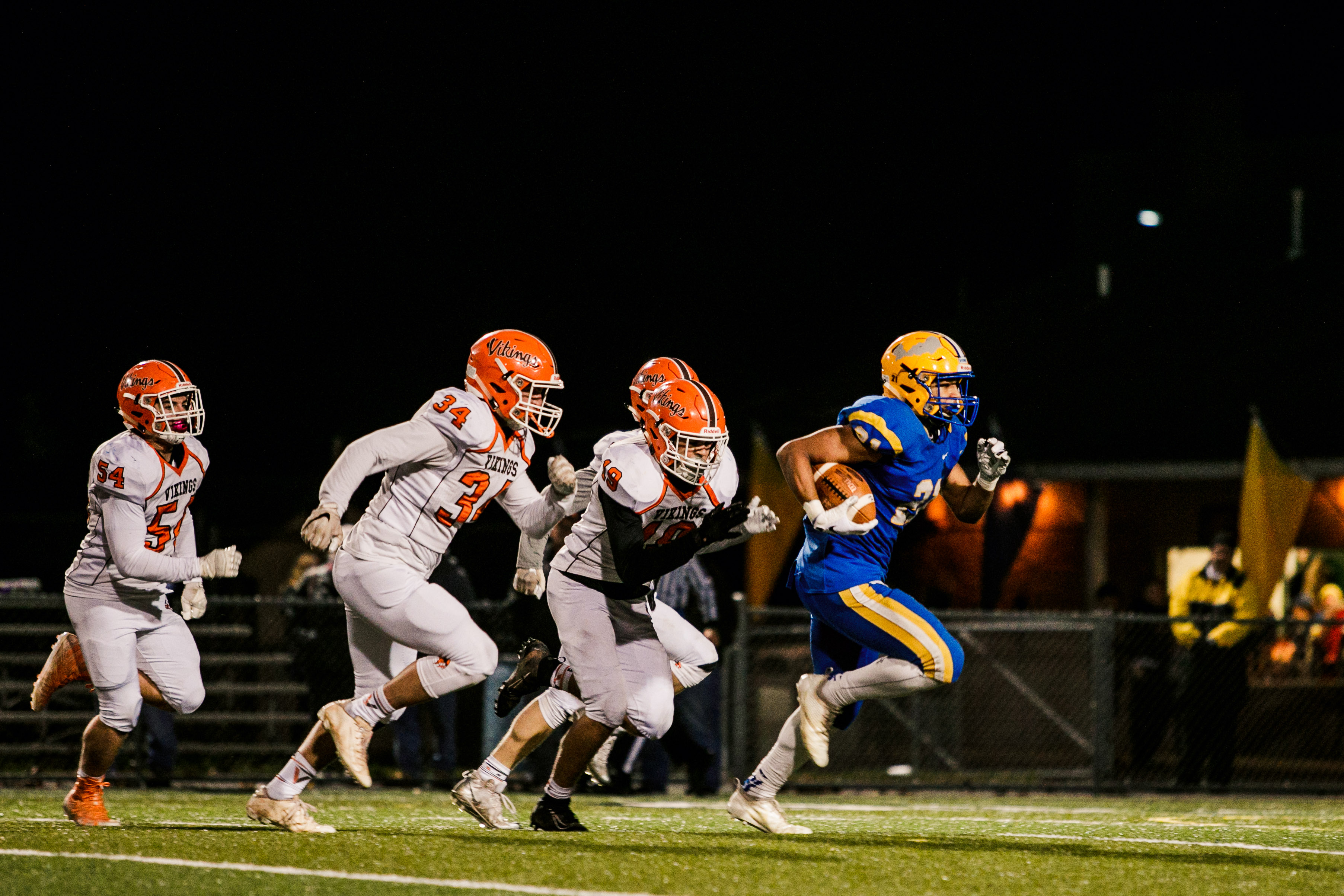 DOWNINGTOWN >> If it’s November and cold outside, it’s time for Downingtown East style football. Saturday night at Kottmeyer Stadium, host Downingtown East pounded out 451 yards on the ground as the Cougars overwhelmed Perkiomen Valley, 55-27, in the opening round of the District 1 6A playoffs. The Cougars will now host Haverford next Saturday night in the district second round.

Downingtown East (10-1) got a sparkling 256 yard rushing game from junior Stanley Bryant and 178 more from sophomore N.J. Cogliati, who was making the first start of his career.

“It was realy fun to be out there and making plays,” Cogliati said. “The offensive line did a great job making room and I just tried to run hard. We like to run the ball here.”
Run the Cougars did as they left Viking (7-4) defenders baffled all night. The Cougars took the opening kickoff and went 71 yards in 11 plays before Drew Person took it in from a yard out for a 7-0 Cougar lead.
Perkiomen Valley came right back behind impressive sophomore quarterback Ethan Kohler, who threw for 244 yards on the night. But, it was a trick play that knotted the score at 7-7 for the Vikings.
Kohler took the snap, then pitched to Jon Moccia, who threw a perfect 29 yard pass to Mike Dougherty and it was a 7-7 game late in the first period.

“We had some trouble with some of their trick plays,” Downingtown East head coach Mike Matta said. “And we missed some tackles and had way too many penalties.”
The Cougars ammassed 112 yards in penalities but the Cougars running game did not let that be a factor. With Bryant and Cogliati gashing the Viking defense, the Cougars took a 21-7 lead after a botched Viking punt gabve the Cougars a short field.
Then on the last play of the first half, Person hit James Basilii with a beautiful 15 yard touchdown pass and a 28-7 Cougar lead at intermission.

Downingtown East’s Drew Person lofts a touchdown pass to James Basilii on the final play of the first half. (Nate Heckenberger – For MediaNews Group)

Kohler tried to keep the Vikings in the game but the Cougar defense sacked the Vikings signal caller seven times and the Vikings only garnered 101 yards rushing on the night. But the Vikings kept fighting, and when Kohler ran it in from seven yards out early in the third period, it was a 28-13 game.
The Cougars got two more third-period touchdwons from Bryant. One was a 35-yard run where the Cougar senior broke at least five tackles and the other was a 39-yard run right up the middle to put the game out of reach at 42-20 after three periods.
“We knew they were going to run the football,” Perkiomen Valley head coach Rob Heist said. “That is the kind of program they are and Mike Matta does a great job there. Our kids battled but they scored more points than we did tonight.”

Cogliati scored two more rushing touchdowns in the fourth period on runs of 12 and 13 yards and the Vikings ended the scoring on a 71 yard pass from Kohler to Moccia to make it 55-27.
“We are known for our offensive line,” Matta said. “They took ownership of the game and they work hard in the weight room. It is a shame they were diving at our kids knees. We actually get punished for being big and strong.”
Bryant rushed the ball 20 times for 256 yards wanted to give special credit to the Cougars front wall.
“Those guys up front are unbelievable,” Bryant said. “Without them knocking people on their back sides, we are not going to put 55 points up. Our fullback, Matt Glazer, was knocking people down and Kyle Hodges was tearing it up too. Now, we get ready for Haverford.”