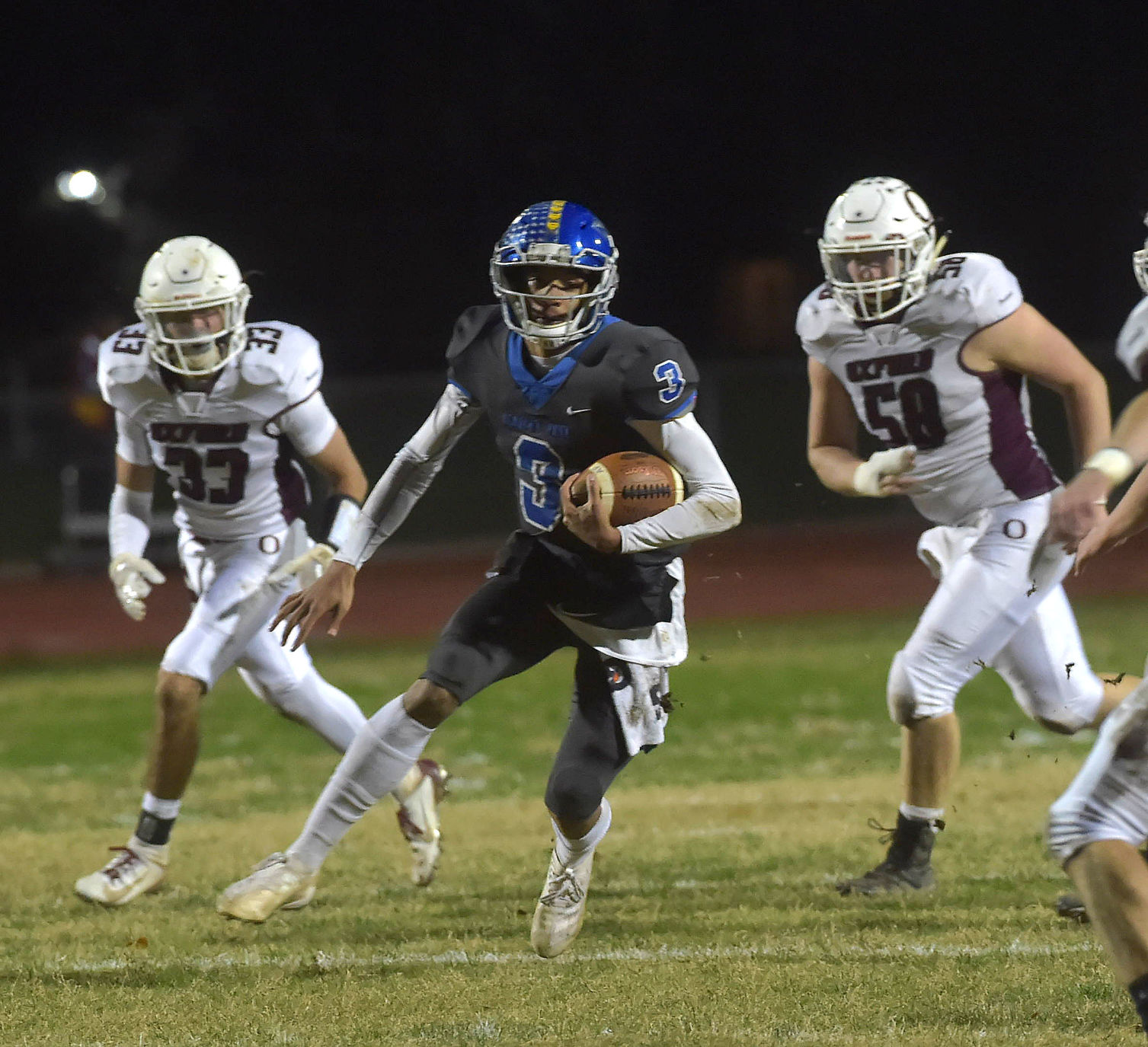 SHARON HILL — A scuffling Academy Park offense finally got something going Friday night and put Oxford in a quick hole. Behind, the underdogs from the Chest-Mont League dusted off a trick play.

It worked. Then Malic Patterson made sure it didn’t. The senior defensive back’s thievery of the football was one play amid countless others in Academy Park’s 26-0 victory in the first round of the District 1 Class 5A tournament, but it showed what this defense is all about.

The third-seeded Knights (9-2) head to the quarterfinals for the ninth consecutive season. There, they will host sixth-seeded Penn Wood. It will be a scene. Patterson and the defense will be coming off a dominating shutout performance.

Nafees Fox wraps up Oxford’s Jaxon Chew Friday night. It was one of many outstanding defensive plays the Knights made in a 26-0 victory over the Hornets in the first round of the District 1 Class 5A playoffs.
(Pete Bannan/MediaNews Group)

“I feel like, defense, we played good,” Patterson said. “We had a good week of practice, we had mistakes here and there. But I expected the defense to pull through.”

They did that because of plays like the one Patterson made late in the first half. Academy Park had just gone up 12-0 on Barry Brown’s 41-yard quick hitch to a nifty Jalen Allen, who made three guys miss then let his wheels do the rest. Oxford (4-7) called for a halfback pass. It needed to do something.

Wide out Justin Neskie hauled in the lob from Jaxon Chew, but after a few steps, Patterson snatched the ball away from him.

“I was mad on the play because I had messed up, I had to get (it) back,” Patterson said. “When I got it, I was pretty excited because I wasn’t expecting it.”

Four plays later, Brown hit Malik Johnson on a slant. He raced 51 yards in a flash and was in the end zone. It was 19-0 and the game was pretty much over. It was treacherous getting there.

The Knights went up 6-0 quickly. Johnson had an interception on the fourth play of the game. Brown scrambled 30 yards for a score on the ensuing drive. Then the Knights’ offense didn’t do much. Frustration mounted.

The defense held firm. It forced four turnovers and sacked Oxford quarterback Thomas Repetz seven times. It yielded 188 yards to an up-tempo offense. But it never broke and only let Oxford reach the redzone once.

“The kids, we sputtered,” Vosheski said. “We played really good at times, we tackled well at times. And there’s other things we didn’t do well. All in all I was happy with the defense. You have to be with a shutout.”

The offense? Well, Vosheski used the word “sleepwalking” twice when talking about them. The Knights amassed 427 yards. Brown passed for 175. A host of backs rushed for 252. Still, nobody was thrilled.

Eric Willis had a 59-yard touchdown run early in the fourth quarter to ice the game.

“Turning the ball over four times in the first half was an absolute killer,” Oxford coach Mike Means said. “Two fumbles, two picks and some miscommunications. Against a team that (is as) rangy and athletic as this team is, we can’t put ourselves behind the chains.”

As for Academy Park, to get to the semifinals for the first time since 2016, it will have to get past a rather familiar opponent. There will be an extra level of hype this week with Penn Wood coming to town.

The players will not acknowledge it.

Vosheski did not mention or even talk about the possibility of a showdown with the Patriots with his team. The Knights won the first meeting earlier this season. Then they slipped up against Chester, allowing Penn Wood to fall back into a split Del Val League title.

So, both sides will have a little something to prove. Let the hype begin.

“They’re healthy, which is a plus for them,” Vosheski said. “We’re banged up. If we can duplicate what we did the last time, that’d be awesome. I just don’t think it’s gonna be easy for us.”

Johnson steps up in the clutch as Penn Wood advances past Radnor
Schilling, seasoned seniors run all over Marple Newtown