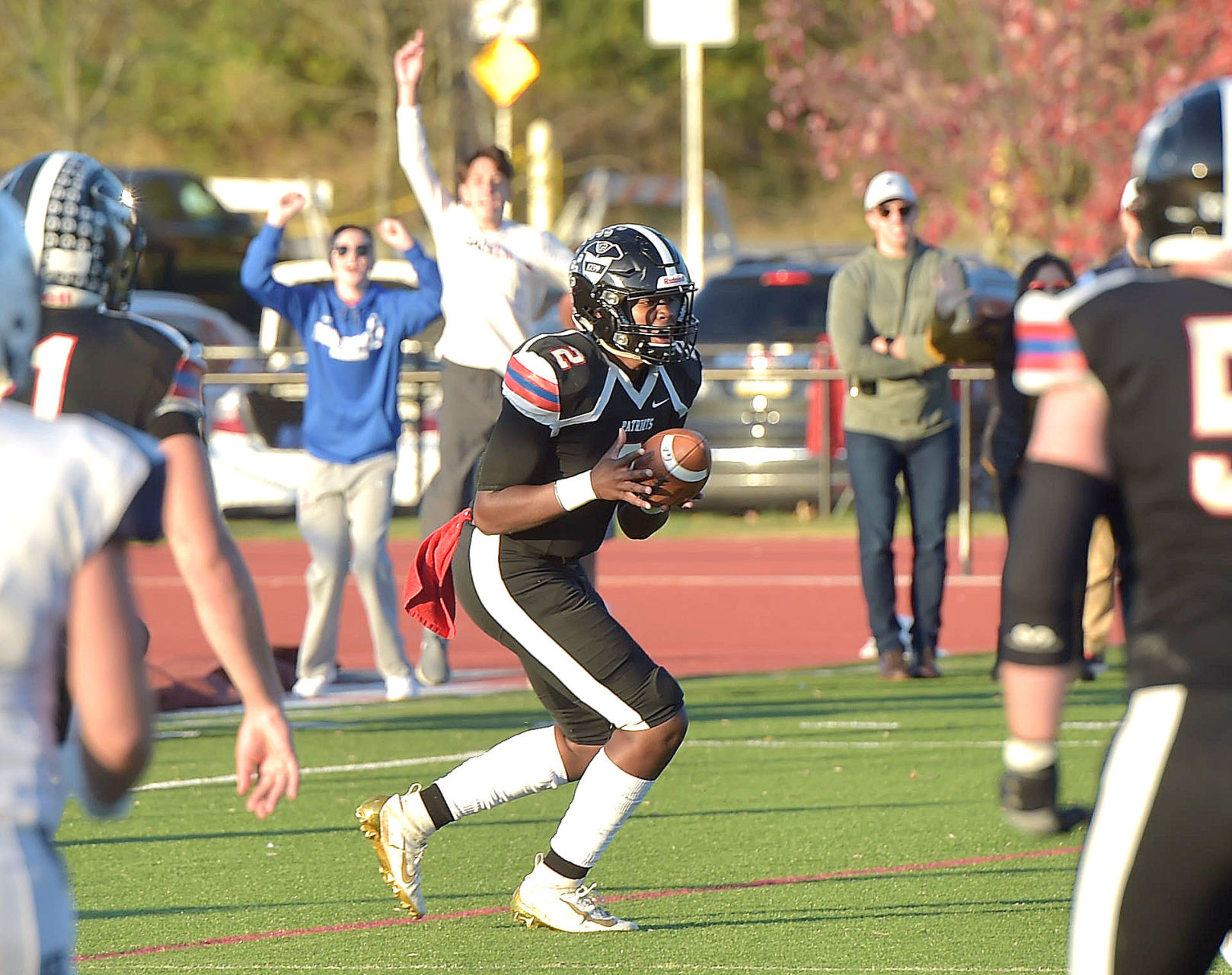 Germantown Academy quarterback Jordan Longino completes the Philly Special on a two-point conversion in overtime to give the Patriots a 56-55 victory over Episcopal Academy. (PETE BANNAN/MEDIANEWS GROUP)

WHITEMARSH TWP. — Germantown Academy coach Matt Dence made the the right call when he elected to go for two points in overtime.

The officials failed to make the right call when the Patriots executed the Philly Special that had one too many forward passes.

Quarterback Jordan Longino received the snap out of the shotgun, then flipped the ball forward to wide receiver Jerry Griffen-Batchler, who was coming across in motion. Griffen-Batchler then tossed the ball behind to running back Lacey Snowden, who was streaking across from the opposite side of the field. Snowden then stopped five yards in the backfield, set his feet and threw to wide-open Longino in the end zone to give GA a 56-55 win.

“I’ll have to watch the film,” Dence said. “It’s a play that we practiced, it was a good play when we did practice it and executed it. I think there’s a lot of calls that go both ways that aren’t called … but it’s something I have to look at on film.”

The loss was the first of the season for Daily Times No. 1 Episcopal Academy (8-1, 3-1 Inter-Ac League).

While the Patriots (6-2, 2-2) deserved the win, EA had every right to feel robbed. Rule 7, section 5 on the National Federation of State High Schools Associations 2019 football rule book states “An illegal forward pass is a foul.” Under subsection C an illegal forward pass includes a second forward pass thrown during a down. The penalty for the infraction is five yards and a loss of down. In this case, the game would have been over.

EA coaches were understandbly livid. Todd Fairlie and his assistants pleaded with the refs to throw a flag, but to no avail. Episcopal had no other choice but to accept the outcome.

“It was pretty clear and you would think that at this level, it would’ve been called right away,” Fairlie said. “But we let it get to that point. We had plenty of opportunities to get stops and we didn’t.”

Episcopal quarterback Marcus McDaniel strides into the end zone for the first of his fIve touchdowns. It wasn’t enough as the Churchmen suffered their first loss in a 56-55 setback to Germantown Academy in overtime. (PETE BANNAN/MEDIANEWS GROUP).

Since so many teams have iPads on the sideline, one can only wonder how long it will take until The National Federation of State High School Associations, which writes the rules of competition for most high school sports in the country, adopts an instant replay rule at the scholastic level. Of course, that’s easier said than done, and every school should be afforded the same equipment to review calls.

Replay was the last thing on the mind of Longino and the Patriots, who reveled in the moment. They had knocked off the last remaining undefeated team in the Inter-Ac with a win they won’t soon forget.

“We were just working on it yesterday in practice for the first time,” said Longino, who completed 18 of 25 pass attempts for 274 yards and four touchdowns. “It didn’t work at first, but we had to trust it and it worked.

Episcopal’s Malcolm Folk take a pass in stride for a 54-yard touchdown in the second half.

EA got the first crack in overtime and converted. Quarterback Maurcus McDaniel scored his fifth touchdown run of the day and Max Pasternack drilled the PAT to give the Churchmen a 55-48 advantage.

On the next play, Longino connected with Griffen-Batchler in the end zone from the 10-yard line to pull GA within a point. The Patriots could have called upon their excellent kicker, Nicholas Niemynski, to kick the extra point. Niemynski hit all of his PATs and made a pair of field goals, including a 47-yard boot with two seconds left to send the game to OT.

But Dence figured enough was enough and it was time to go home, win or lose.

“You want to have a play like that to beat a team like Episcopal. You have to have a few wrinkles,” Dence said. “I didn’t want to keep slugging with them. I knew I wanted to score quick and I thought when we had the ball second, we would have the choice. Todd’s as good of a coach as there is in the Inter-Ac, I have the utmost respect for him and his staff. I don’t want to get to the point where we keep going back and forth.”

EA responded with 21 straight points. McDaniel (133 yards, five TDs) had scoring runs of 30 and five yards, then connected with Brian Virbitsky on a 48-yard TD pass to make it 21-14.

GA scored the next 17 points to go ahead 31-21 with eight minutes left in the third quarter. The Churchmen always had a response, though, as McDaniel plunged into the end zone from a yard out to trim the deficit to three.

Episcopal’s (25) Billy Adams is brought down by Germantown Academy’s (22) Jake Hsu in the second half. (PETE BANNAN/MEDIANEWS GROUP)

The fourth quarter was a slugfest.

After Griffen-Bachler caught an 18-yard touchdown pass from Longino, EA went ahead on a pair of Malcolm Folk scores. The senior athlete hauled in a 54-yard pass from McDaniel, then scampered 26 yards to pay dirt to give EA the lead. However, the blocked extra point on Folk’s second touchdown kept EA’s lead to only a field goal. That would come back to haunt the Churchmen in the final seconds.

Following another brilliant drive capped off another McDaniel TD run, the Patriots’ quick-strike offense was able to drive upfield in a hurry and give Niemynski a chance to tie the game. Jacob Hsu made a leaping catch across the middle for 25 yards to set up Niemynski, who kicked the ball straight through the uprights from 47 yards.

Episcopal remains in first place in the Inter-Ac League. A win over Haverford School next week would give them at least a share of the title.

“I’m not going to put it on the officials because there was way too many points on the board. They should not have gotten anywhere close to 56 points,” said McDaniel, who went 11-for-14 for 179 yards. “That’s just us not doing our jobs and not finishing. … It’s a play that we all can see was wro